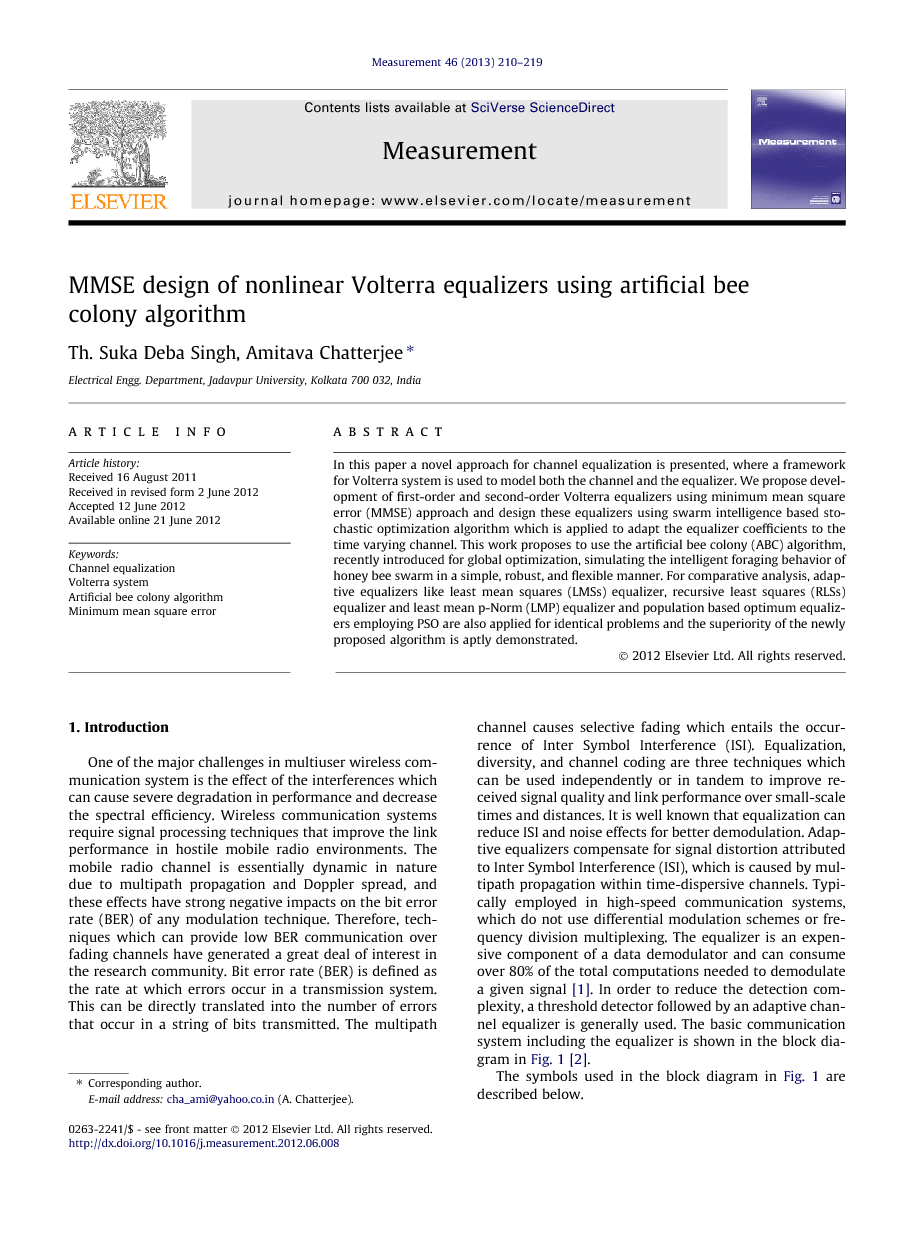 In this paper a novel approach for channel equalization is presented, where a framework for Volterra system is used to model both the channel and the equalizer. We propose development of first-order and second-order Volterra equalizers using minimum mean square error (MMSE) approach and design these equalizers using swarm intelligence based stochastic optimization algorithm which is applied to adapt the equalizer coefficients to the time varying channel. This work proposes to use the artificial bee colony (ABC) algorithm, recently introduced for global optimization, simulating the intelligent foraging behavior of honey bee swarm in a simple, robust, and flexible manner. For comparative analysis, adaptive equalizers like least mean squares (LMSs) equalizer, recursive least squares (RLSs) equalizer and least mean p-Norm (LMP) equalizer and population based optimum equalizers employing PSO are also applied for identical problems and the superiority of the newly proposed algorithm is aptly demonstrated.

One of the major challenges in multiuser wireless communication system is the effect of the interferences which can cause severe degradation in performance and decrease the spectral efficiency. Wireless communication systems require signal processing techniques that improve the link performance in hostile mobile radio environments. The mobile radio channel is essentially dynamic in nature due to multipath propagation and Doppler spread, and these effects have strong negative impacts on the bit error rate (BER) of any modulation technique. Therefore, techniques which can provide low BER communication over fading channels have generated a great deal of interest in the research community. Bit error rate (BER) is defined as the rate at which errors occur in a transmission system. This can be directly translated into the number of errors that occur in a string of bits transmitted. The multipath channel causes selective fading which entails the occurrence of Inter Symbol Interference (ISI). Equalization, diversity, and channel coding are three techniques which can be used independently or in tandem to improve received signal quality and link performance over small-scale times and distances. It is well known that equalization can reduce ISI and noise effects for better demodulation. Adaptive equalizers compensate for signal distortion attributed to Inter Symbol Interference (ISI), which is caused by multipath propagation within time-dispersive channels. Typically employed in high-speed communication systems, which do not use differential modulation schemes or frequency division multiplexing. The equalizer is an expensive component of a data demodulator and can consume over 80% of the total computations needed to demodulate a given signal [1]. In order to reduce the detection complexity, a threshold detector followed by an adaptive channel equalizer is generally used. The basic communication system including the equalizer is shown in the block diagram in Fig. 1[2].In Fig. 1, GR(f) is so designed that it is matched to GT(f) and they are designed so that ∣GT(f)∣ · ∣GR(f)∣ = XRC(f) and GE(f) must compensate for channel distortion. Therefore View the MathML sourceGE(f)=1C(f)=1|C(f)|e-jθc(f),|f|⩾W, where View the MathML source|GE(f)|=1|C(f)| and θE(f) = −θc(f). Traditionally the equalizer coefficients have been optimized subject to minimizing either the peak distortion (Zero Forcing (ZF) equalization), or the mean square error (Minimum Mean Square Error (MMSE) equalization). For strictly linear systems, many different equalization strategies have already been proposed. The most commonly known are zero-forcing (ZF) equalizers, minimum mean-square error (MMSE) equalizers, maximum-likelihood (ML) equalizers, and minimum bit error rate (MBER) equalizers [3]. The authors in [4] proposed an equalizer by modeling a nonlinear system using nonlinear Volterra system. They have mathematically shown that equalization can be achieved in one single step as compared to traditional LMS based equalizer and achieving similar performance in terms of BER for varying Eb/N0, the ratio of energy in one bit, Eb, and the noise power spectral density N0. They proposed development of linear and nonlinear equalizers using Volterra systems, where the designs were carried out using the MMSE criterion. However enormous amount of computation are required in their model. Especially, for the second order equalizer, the computation of the correlation matrices for designing an optimal equalizer can get significantly complex. Hence the present paper proposes the development of MMSE equalizers for nonlinear channels, where linear equalizers and nonlinear equalizers of any arbitrary order can be designed using stochastic optimization techniques. These global optimization techniques are derivative free methods that provide suitable alternatives for designing high dimensional, nonlinear equalizers, by configuring a suitable fitness function as a function of the equalizer coefficients and one need not calculate complex data correlation matrices and yet can produce satisfactory equalizer designs. Population based optimization techniques have attracted attention of researchers in the recent past to achieve global optimum solution for various problems. Swarm intelligence, which can be considered as one of the emerging branches in evolutionary computing, provides the researcher an effective tool for solving optimization problems. Swarm intelligence can be broadly defined as an attempt to design an algorithm based on the collective behavior of social insect colonies or other animal societies. The classical example in evolutionary computing used for solving optimization problem is the Genetic Algorithm (GA) [5]. Later, many swarm intelligence algorithms are proposed for solving optimization problems such as the Particle Swarm Optimization (PSO) [6], and the Ant Colony Optimization (ACO) [7]. The present paper proposes to use a recently evolved swarm intelligence approach called artificial bee colony (ABC) algorithm for this propose, which has evolved by mimicking the movement of real bees in quest for food sources. The recent introduction of ABC algorithm [8], [9] and [10] has generated lots of interest in various domains of science and engineering, including, e.g. designing optimum digital finite impulse response (FIR) filters and infinite impulse response (IIR) filters, in vehicle routing problems, in designing filter banks, in forecasting stock markets, solving reliability redundancy allocation problems, etc. [11], [12], [13], [14], [15] and [16]. In this study the coefficients of the equalizer are designed based on ABC optimization technique to minimize a cost function which is formulated using the minimum mean square error (MMSE) criterion. The performance of the design is compared vis-à-vis other popular methods to demonstrate the utility of the proposed approach.

In this paper swarm intelligence based artificial bee colony optimization is applied for channel equalization problems. A nonlinear Volterra system has been used in modeling the nonlinear channel and also the equalizer and the design is carried out using MMSE approach. Two cases of equalizers i.e. linear and nonlinear equalizers were studied and a population based recently proposed swarm intelligence technique, called ABC algorithm, was applied for determination of the equalizer coefficients. Simulation studies show that the proposed ABC based Volterra equalizers could provide satisfactory performances in comparison with LMS, RLS and LMP equalizers and the population based PSO equalizers.