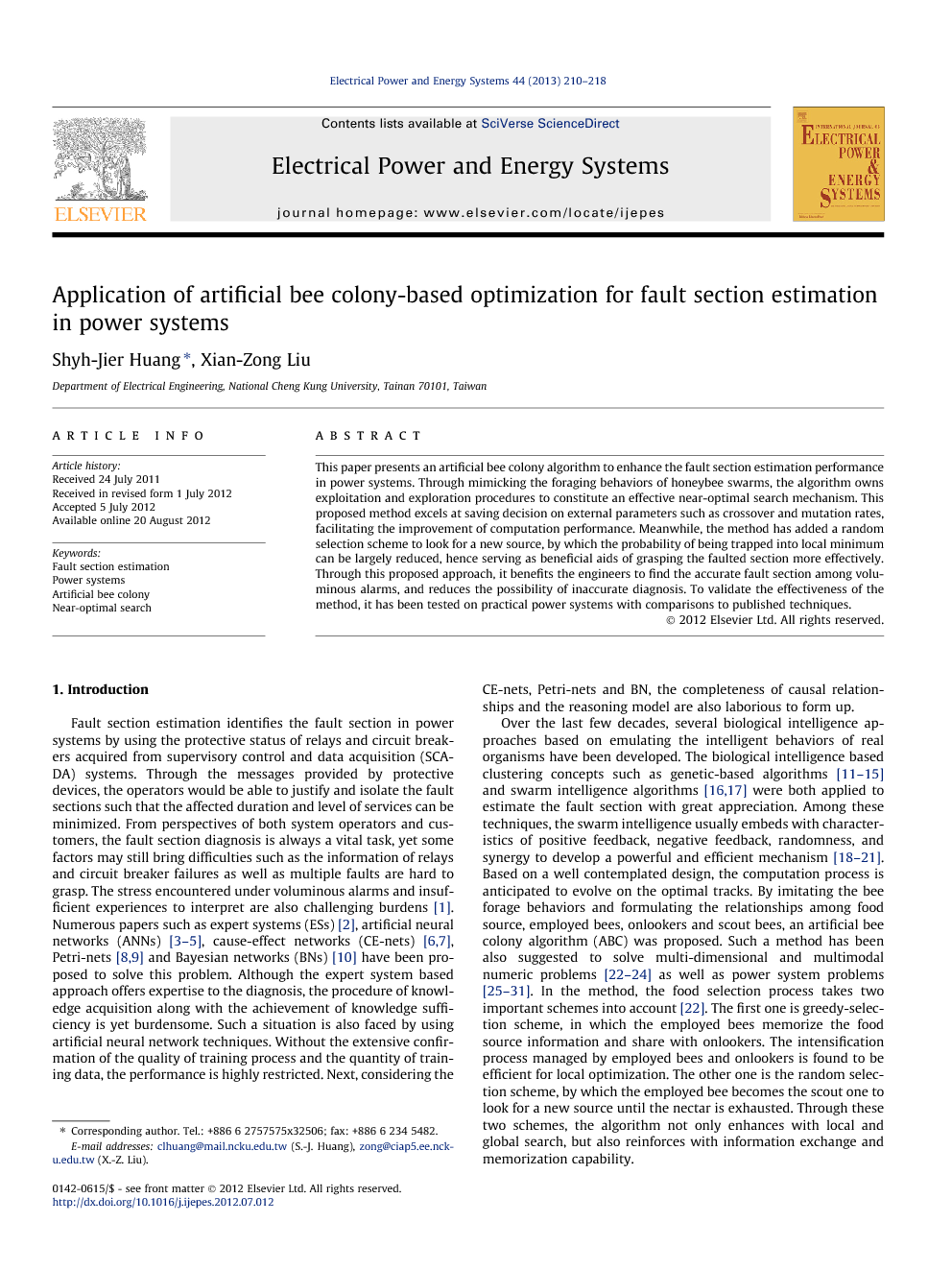 This paper presents an artificial bee colony algorithm to enhance the fault section estimation performance in power systems. Through mimicking the foraging behaviors of honeybee swarms, the algorithm owns exploitation and exploration procedures to constitute an effective near-optimal search mechanism. This proposed method excels at saving decision on external parameters such as crossover and mutation rates, facilitating the improvement of computation performance. Meanwhile, the method has added a random selection scheme to look for a new source, by which the probability of being trapped into local minimum can be largely reduced, hence serving as beneficial aids of grasping the faulted section more effectively. Through this proposed approach, it benefits the engineers to find the accurate fault section among voluminous alarms, and reduces the possibility of inaccurate diagnosis. To validate the effectiveness of the method, it has been tested on practical power systems with comparisons to published techniques.

Fault section estimation identifies the fault section in power systems by using the protective status of relays and circuit breakers acquired from supervisory control and data acquisition (SCADA) systems. Through the messages provided by protective devices, the operators would be able to justify and isolate the fault sections such that the affected duration and level of services can be minimized. From perspectives of both system operators and customers, the fault section diagnosis is always a vital task, yet some factors may still bring difficulties such as the information of relays and circuit breaker failures as well as multiple faults are hard to grasp. The stress encountered under voluminous alarms and insufficient experiences to interpret are also challenging burdens [1]. Numerous papers such as expert systems (ESs) [2], artificial neural networks (ANNs) [3], [4] and [5], cause-effect networks (CE-nets) [6] and [7], Petri-nets [8] and [9] and Bayesian networks (BNs) [10] have been proposed to solve this problem. Although the expert system based approach offers expertise to the diagnosis, the procedure of knowledge acquisition along with the achievement of knowledge sufficiency is yet burdensome. Such a situation is also faced by using artificial neural network techniques. Without the extensive confirmation of the quality of training process and the quantity of training data, the performance is highly restricted. Next, considering the CE-nets, Petri-nets and BN, the completeness of causal relationships and the reasoning model are also laborious to form up. Over the last few decades, several biological intelligence approaches based on emulating the intelligent behaviors of real organisms have been developed. The biological intelligence based clustering concepts such as genetic-based algorithms [11], [12], [13], [14] and [15] and swarm intelligence algorithms [16] and [17] were both applied to estimate the fault section with great appreciation. Among these techniques, the swarm intelligence usually embeds with characteristics of positive feedback, negative feedback, randomness, and synergy to develop a powerful and efficient mechanism [18], [19], [20] and [21]. Based on a well contemplated design, the computation process is anticipated to evolve on the optimal tracks. By imitating the bee forage behaviors and formulating the relationships among food source, employed bees, onlookers and scout bees, an artificial bee colony algorithm (ABC) was proposed. Such a method has been also suggested to solve multi-dimensional and multimodal numeric problems [22], [23] and [24] as well as power system problems [25], [26], [27], [28], [29], [30] and [31]. In the method, the food selection process takes two important schemes into account [22]. The first one is greedy-selection scheme, in which the employed bees memorize the food source information and share with onlookers. The intensification process managed by employed bees and onlookers is found to be efficient for local optimization. The other one is the random selection scheme, by which the employed bee becomes the scout one to look for a new source until the nectar is exhausted. Through these two schemes, the algorithm not only enhances with local and global search, but also reinforces with information exchange and memorization capability. Based on aforementioned features, we have discussed with utility engineers to apply this ABC method to the real system. The method starts with representing the control variable of problem and fitness by food position and the amount of nectar. Then, with the aid of foraging search, the optimal amount of nectar is expected to be better localized, implying that the fault section diagnosis can be accomplished more effectively. This paper will apply the method on the sample system and the real system. The test results will be reported, evaluated, and compared to other methods. The organization of this paper is made as follows. Section 2 formulates the fault section estimation problem, Section 3 describes the method with its application, Section 4 delineates the computation procedure, Section 5 discusses the test results, and Section 6 draws the conclusions.

A novel approach of using artificial bee colony algorithm to solve fault section estimation problems is proposed in this paper. Through the method tested under assumed scenarios and real power systems, this algorithm has demonstrated its effectiveness for fault section estimation application and owns a high potential of being included in the real-world applications. Currently, the method is being programmed to further collaborate with local utility automation, anticipating further facilitating the rapid estimation of faults in a distribution system. Reliability and flexibility of the method has become the major concern which will be reported in the near future.