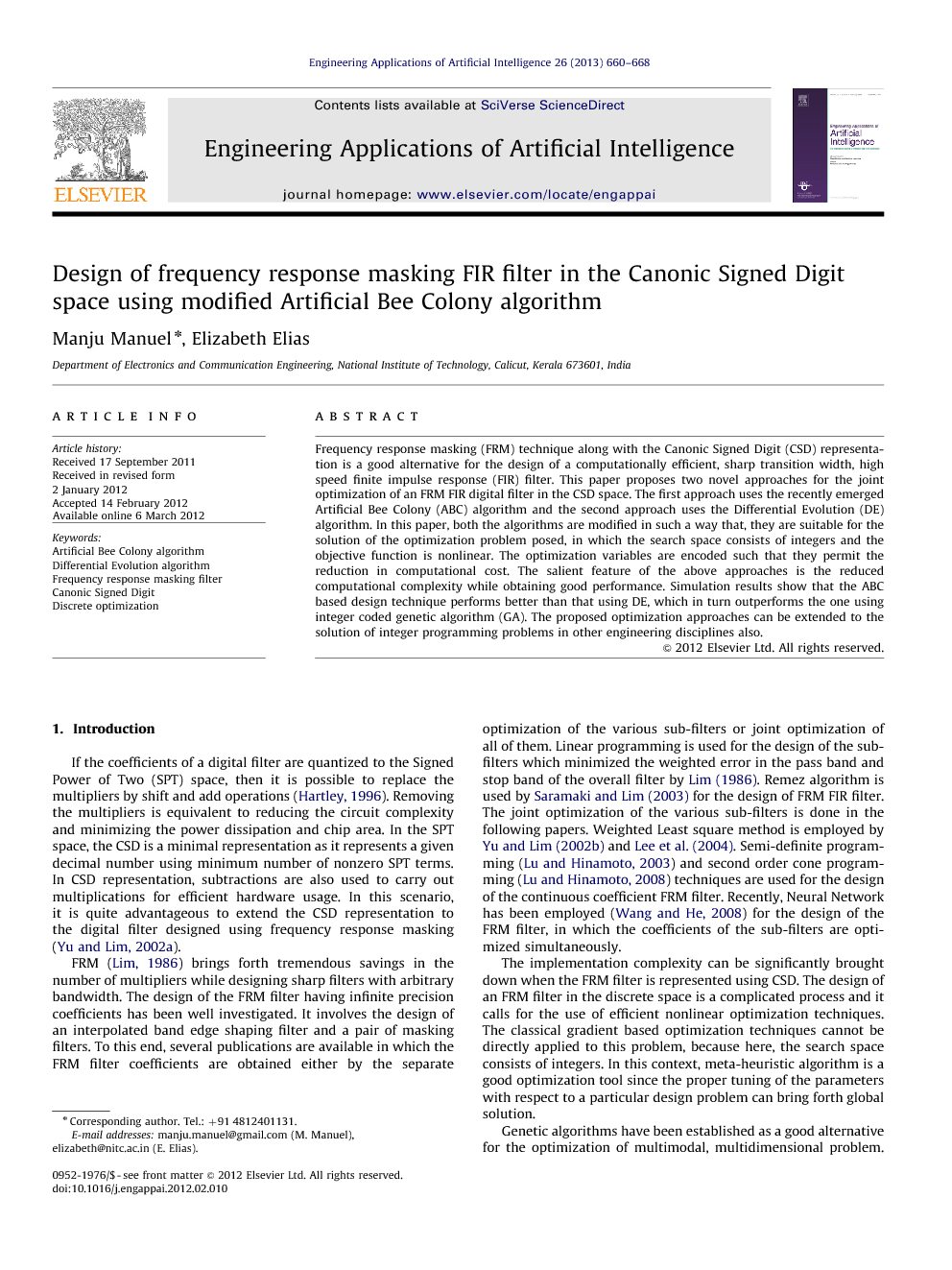 Frequency response masking (FRM) technique along with the Canonic Signed Digit (CSD) representation is a good alternative for the design of a computationally efficient, sharp transition width, high speed finite impulse response (FIR) filter. This paper proposes two novel approaches for the joint optimization of an FRM FIR digital filter in the CSD space. The first approach uses the recently emerged Artificial Bee Colony (ABC) algorithm and the second approach uses the Differential Evolution (DE) algorithm. In this paper, both the algorithms are modified in such a way that, they are suitable for the solution of the optimization problem posed, in which the search space consists of integers and the objective function is nonlinear. The optimization variables are encoded such that they permit the reduction in computational cost. The salient feature of the above approaches is the reduced computational complexity while obtaining good performance. Simulation results show that the ABC based design technique performs better than that using DE, which in turn outperforms the one using integer coded genetic algorithm (GA). The proposed optimization approaches can be extended to the solution of integer programming problems in other engineering disciplines also.

If the coefficients of a digital filter are quantized to the Signed Power of Two (SPT) space, then it is possible to replace the multipliers by shift and add operations (Hartley, 1996). Removing the multipliers is equivalent to reducing the circuit complexity and minimizing the power dissipation and chip area. In the SPT space, the CSD is a minimal representation as it represents a given decimal number using minimum number of nonzero SPT terms. In CSD representation, subtractions are also used to carry out multiplications for efficient hardware usage. In this scenario, it is quite advantageous to extend the CSD representation to the digital filter designed using frequency response masking (Yu and Lim, 2002a). FRM (Lim, 1986) brings forth tremendous savings in the number of multipliers while designing sharp filters with arbitrary bandwidth. The design of the FRM filter having infinite precision coefficients has been well investigated. It involves the design of an interpolated band edge shaping filter and a pair of masking filters. To this end, several publications are available in which the FRM filter coefficients are obtained either by the separate optimization of the various sub-filters or joint optimization of all of them. Linear programming is used for the design of the sub-filters which minimized the weighted error in the pass band and stop band of the overall filter by Lim (1986). Remez algorithm is used by Saramaki and Lim (2003) for the design of FRM FIR filter. The joint optimization of the various sub-filters is done in the following papers. Weighted Least square method is employed by Yu and Lim (2002b) and Lee et al. (2004). Semi-definite programming (Lu and Hinamoto, 2003) and second order cone programming (Lu and Hinamoto, 2008) techniques are used for the design of the continuous coefficient FRM filter. Recently, Neural Network has been employed (Wang and He, 2008) for the design of the FRM filter, in which the coefficients of the sub-filters are optimized simultaneously. The implementation complexity can be significantly brought down when the FRM filter is represented using CSD. The design of an FRM filter in the discrete space is a complicated process and it calls for the use of efficient nonlinear optimization techniques. The classical gradient based optimization techniques cannot be directly applied to this problem, because here, the search space consists of integers. In this context, meta-heuristic algorithm is a good optimization tool since the proper tuning of the parameters with respect to a particular design problem can bring forth global solution. Genetic algorithms have been established as a good alternative for the optimization of multimodal, multidimensional problem. This is a population based evolutionary algorithm where, in each iteration, candidate solutions are generated using genetic operations like reproduction, crossover and mutation. GA is used to design the FRM filter in the SPT space by Yu and Lim (2002a). For GA, there is a chance for entrapment in a local minima in some cases, thereby leading to sub-optimal solutions. This drawback can be avoided by properly modifying GA. A novel GA is reported by Mercier et al. (2007) where a look up table approach is used for the design of FRM filters in the CSD space. Here, the binary equivalent of the index of the look up table is used to obtain the initial seed. This paper proposes the design of the CSD based discrete FRM filter with reduced computational time using two approaches, one using the recently emerged Artificial Bee Colony algorithm (Karaboga and Basturk, 2008) and another using Differential Evolution algorithm (Storn and Price, 1995). Differential Evolution has been chosen because it requires minimum number of parameters in the initialization process. The ABC algorithm and Differential Evolution algorithm have been modified in this work in such a way that, in the course of optimization, the candidate solutions are integers and efficient exploration and exploitation of the search space is done. A promising aspect of these approaches is that good quality solution is obtained with much reduced computation time. Besides, the proposed joint optimization permits the simultaneous design of the various sub-filters of the FRM filter. Another advantage of the proposed approaches is that, in the course of the optimization, restoration techniques are not needed to bring back the candidate solutions to the legitimate CSD codes, unlike in the design of CSD filters based on genetic algorithm (Ashrafzadeh and Nowrouzian, 1997). For the purpose of comparison, integer coded GA (Manoj and Elizabeth, 2009) is also used to design the discrete FRM filter. It was found that the design based on ABC approach outperforms that based on DE and the one using DE performs better than that using integer coded GA in terms of the frequency domain specifications of the FRM filter. The paper is organized as follows. Section 2 gives an overview of frequency response masking. In Section 3, the CSD representation is briefed. Section 4 gives a brief overview of the ABC algorithm and Differential Evolution algorithm. The statement of the problem is done in Section 5. The design of the continuous coefficient FRM filter is briefed in Section 6. Section 7 illustrates the proposed design of multiplier-less FRM filter using the modified ABC algorithm. Section 8 is concerned with the design of the discrete FRM filter using the modified Differential Evolution algorithm. The results and discussions are presented in Section 9.

In this work, we have proposed two approaches for the discrete optimization of FRM filter in the CSD space. To this end, Artificial Bee Colony algorithm and Differential Evolution have been tailor made for the optimization problem posed here, where the search space consists of integers and the objective function is nonlinear. The above algorithms have been employed because, they have simple computational models, low implementation complexity, and the ability to get out of the local minima. A promising feature of the proposed joint optimization of CSD based FRM filter is that, restoration techniques are not needed to bring back the candidate solutions to the permissible CSD codes in the course of optimization. The use of joint optimization permits the simultaneous design of the sub-filters. Simulation results show that these algorithms yield better performances than the integer coded GA algorithm (Manoj and Elizabeth, 2009) in the frequency response specifications of the overall FRM filter designed. Besides, the computational complexity of the resulting filter is of the same order in the two proposed approaches as well as that of the integer coded GA. Yet another remarkable aspect of the proposed approaches is that the running time for optimization approaches have been significantly brought down as compared to the novel GA proposed by Mercier et al. (2007). The proposed optimization approaches can be used for the solution of many real world optimization problems in which the search space consists of integers.