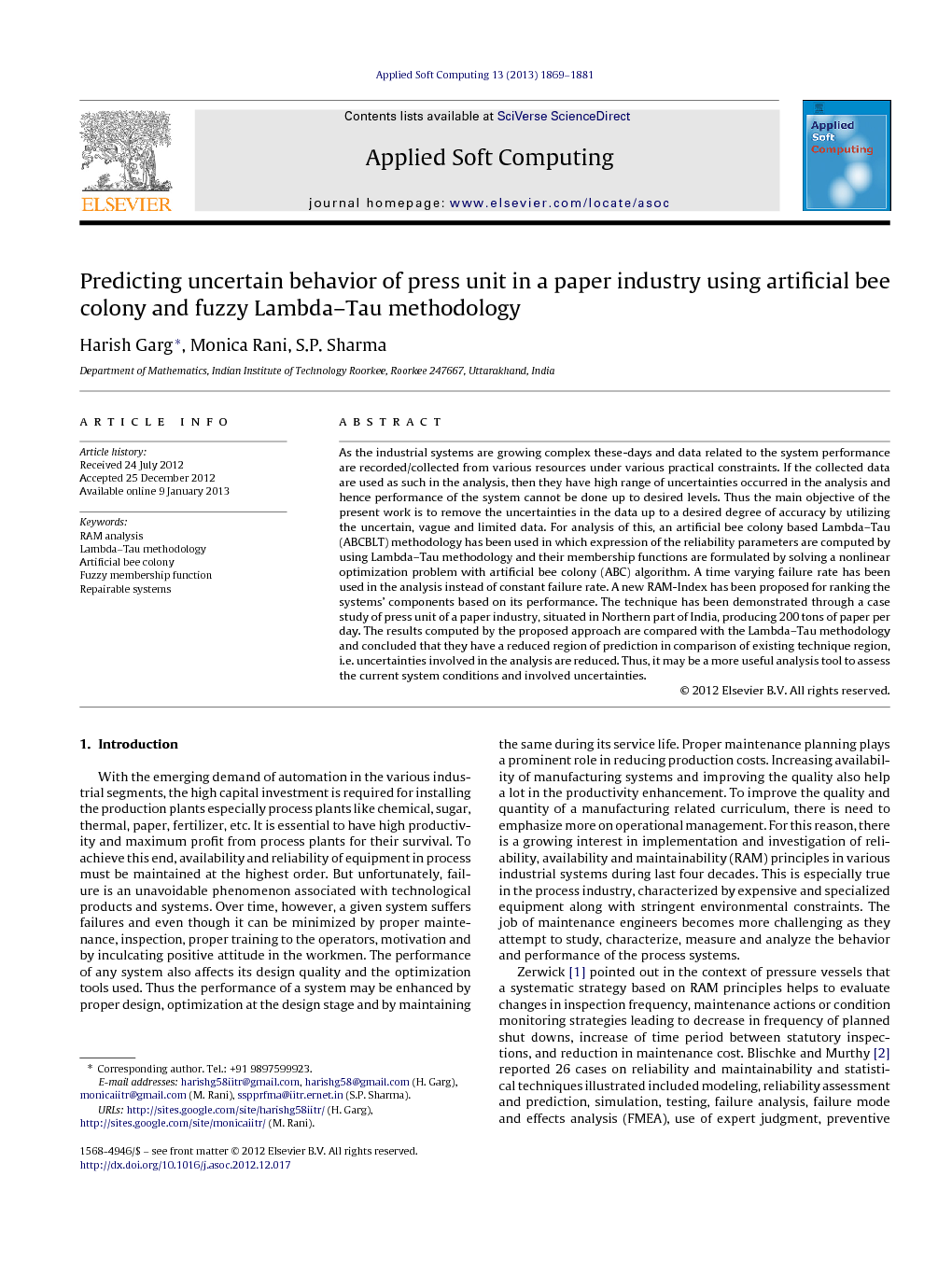 As the industrial systems are growing complex these-days and data related to the system performance are recorded/collected from various resources under various practical constraints. If the collected data are used as such in the analysis, then they have high range of uncertainties occurred in the analysis and hence performance of the system cannot be done up to desired levels. Thus the main objective of the present work is to remove the uncertainties in the data up to a desired degree of accuracy by utilizing the uncertain, vague and limited data. For analysis of this, an artificial bee colony based Lambda–Tau (ABCBLT) methodology has been used in which expression of the reliability parameters are computed by using Lambda–Tau methodology and their membership functions are formulated by solving a nonlinear optimization problem with artificial bee colony (ABC) algorithm. A time varying failure rate has been used in the analysis instead of constant failure rate. A new RAM-Index has been proposed for ranking the systems’ components based on its performance. The technique has been demonstrated through a case study of press unit of a paper industry, situated in Northern part of India, producing 200 tons of paper per day. The results computed by the proposed approach are compared with the Lambda–Tau methodology and concluded that they have a reduced region of prediction in comparison of existing technique region, i.e. uncertainties involved in the analysis are reduced. Thus, it may be a more useful analysis tool to assess the current system conditions and involved uncertainties.

In the present study, an attempt has been made by the authors to enhance the performance of the press unit of a paper mill by utilizing limited, vague and uncertain data. A time varying failure rates of the component instead of constant failure rates have been considered and have analyzed the RAM parameters by using ABCBLT, a hybridized technique. Major advantage of the proposed technique is that it gives compressed search space for each computed reliability index. This technique optimize the spread of the reliability indices indicating higher sensitivity zone and thus may be useful for the reliability engineers/experts to make more sound decisions. Depending upon the value of confidence level α, the analyst predicts the measures for the system and can take necessary steps to improve system performance. In order to find the more sensitive component of the system, which will effect the system performance, a time varying RAM-Index has been introduced. The ranking of the subcomponents of the system, based on its performance, as per preferential order has been analyzed by varying the individual and simultaneously parameters of failure and repair rates of components on RAM-Index and fixing failure rate and repair time of other components at the same time. This analysis indicates the effect of taking wrong decision on the system's behavior as well as on the performance. Thus it is concluded from these analysis that in order to improve the availability and reliability aspects, it is necessary to enhance the maintainability requirement of the system. Using these analysis and results tabulated in tables, it has been concluded that more attention should be given in preferential order to the components; roller rubber wear, roller bending, felt and roller bearing for improving the performance of the system. These results of system will help the concern managers to plan and adapt suitable maintenance practices/strategies for improving system performance and thereby reduce operational and maintenance costs. Thus, it will facilitate the management in reallocating the resources, making maintenance decisions, achieving long run availability of the system, and enhancing the overall productivity of the plant. Apart from these advantages, the system performance analysis may be utilized to conduct cost-benefit analysis, operational capability studies, inventory/spare parts management, and replacement decisions.