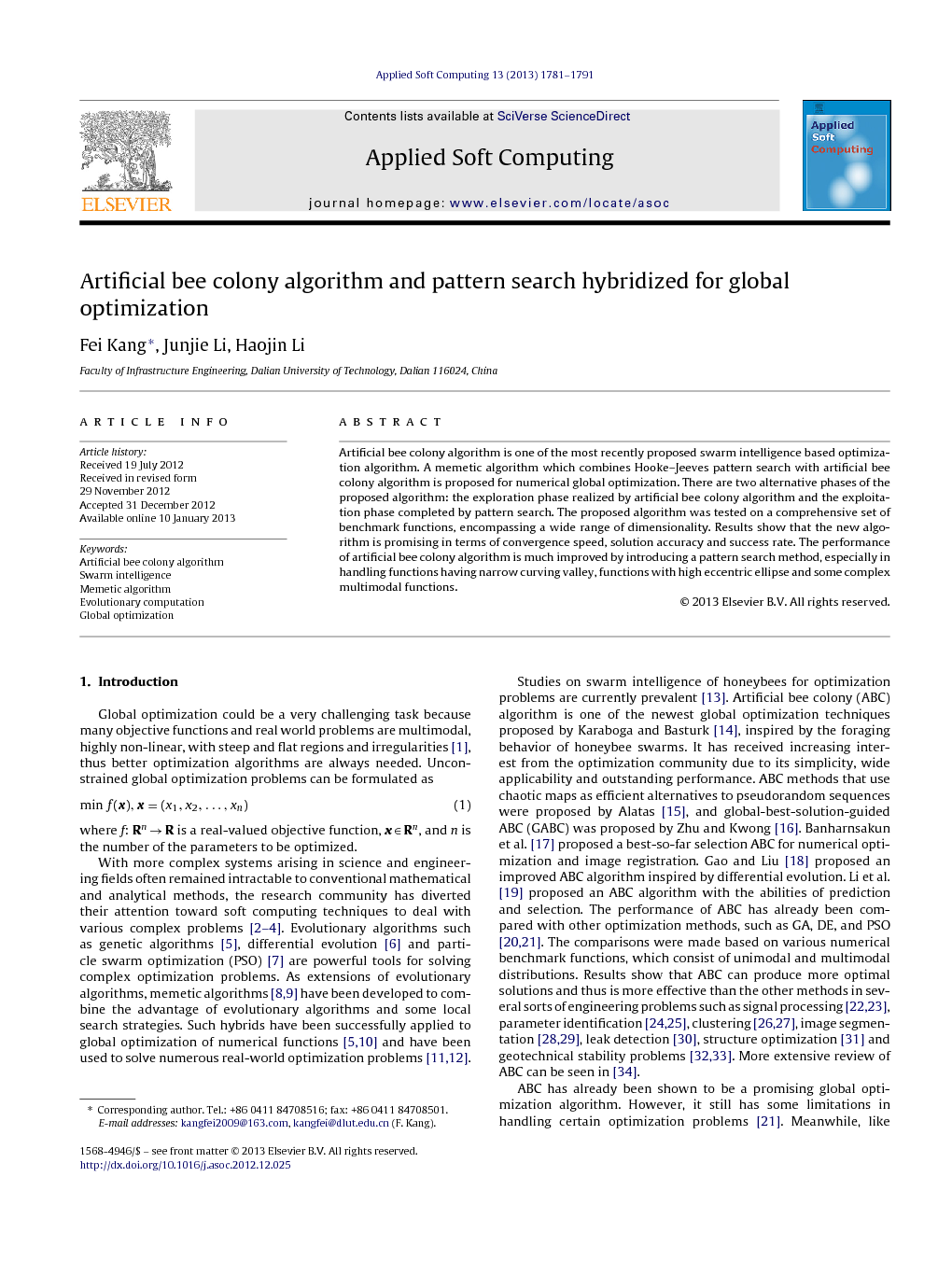 Global optimization could be a very challenging task because many objective functions and real world problems are multimodal, highly non-linear, with steep and flat regions and irregularities [1], thus better optimization algorithms are always needed. Unconstrained global optimization problems can be formulated as equation(1) View the MathML sourcemin f(x),x=(x1,x2,…,xn) where f: Rn → R is a real-valued objective function, x ∈ Rn, and n is the number of the parameters to be optimized. With more complex systems arising in science and engineering fields often remained intractable to conventional mathematical and analytical methods, the research community has diverted their attention toward soft computing techniques to deal with various complex problems [2], [3] and [4]. Evolutionary algorithms such as genetic algorithms [5], differential evolution [6] and particle swarm optimization (PSO) [7] are powerful tools for solving complex optimization problems. As extensions of evolutionary algorithms, memetic algorithms [8] and [9] have been developed to combine the advantage of evolutionary algorithms and some local search strategies. Such hybrids have been successfully applied to global optimization of numerical functions [5] and [10] and have been used to solve numerous real-world optimization problems [11] and [12]. Studies on swarm intelligence of honeybees for optimization problems are currently prevalent [13]. Artificial bee colony (ABC) algorithm is one of the newest global optimization techniques proposed by Karaboga and Basturk [14], inspired by the foraging behavior of honeybee swarms. It has received increasing interest from the optimization community due to its simplicity, wide applicability and outstanding performance. ABC methods that use chaotic maps as efficient alternatives to pseudorandom sequences were proposed by Alatas [15], and global-best-solution-guided ABC (GABC) was proposed by Zhu and Kwong [16]. Banharnsakun et al. [17] proposed a best-so-far selection ABC for numerical optimization and image registration. Gao and Liu [18] proposed an improved ABC algorithm inspired by differential evolution. Li et al. [19] proposed an ABC algorithm with the abilities of prediction and selection. The performance of ABC has already been compared with other optimization methods, such as GA, DE, and PSO [20] and [21]. The comparisons were made based on various numerical benchmark functions, which consist of unimodal and multimodal distributions. Results show that ABC can produce more optimal solutions and thus is more effective than the other methods in several sorts of engineering problems such as signal processing [22] and [23], parameter identification [24] and [25], clustering [26] and [27], image segmentation [28] and [29], leak detection [30], structure optimization [31] and geotechnical stability problems [32] and [33]. More extensive review of ABC can be seen in [34]. ABC has already been shown to be a promising global optimization algorithm. However, it still has some limitations in handling certain optimization problems [21]. Meanwhile, like most population-based algorithms, ABC takes a long time because of its stochastic nature. To improve the performance of ABC, a Hooke–Jeeves artificial bee colony (HABC) algorithm is proposed for global optimization of numerical functions. Compared to the algorithm proposed in [35], the HABC algorithm has only two more control parameters than ABC. The proposed algorithm retains the main steps of ABC and incorporates a pattern search based local search technique. ABC and pattern search have complementary advantages, and a hybrid of the two algorithms can result in a faster and more robust technique. The effect of control parameters for HABC was studied and efficiency of the new algorithm was tested on extensive functions. The remainder of this paper is organized as follows. In Section 2, a concise presentation of ABC is provided. In Section 3, the proposed HABC algorithm is introduced. In Section 4, experimental results are presented. Conclusions are given in Section 5. Some test problems are listed in Appendix A.

A hybrid global optimization algorithm called HABC has been proposed, studied and discussed. It combines two search techniques: the ABC algorithm and a slightly modified pattern search method. Both ABC and Hooke–Jeeves pattern search are derivative-free algorithms for global optimization, so the proposed HABC also does not require the derivatives of the optimized objective functions. The proposed HABC algorithm has been tested on extensive benchmark mathematical functions and has shown very reliable performance in most cases. When compared with ABC and other well-known or recently proposed algorithms, the proposed new method has demonstrated strongly competitive results in terms of number of function evaluations, success rate and accuracy. Practical application of the new approach would also be worth further studying.