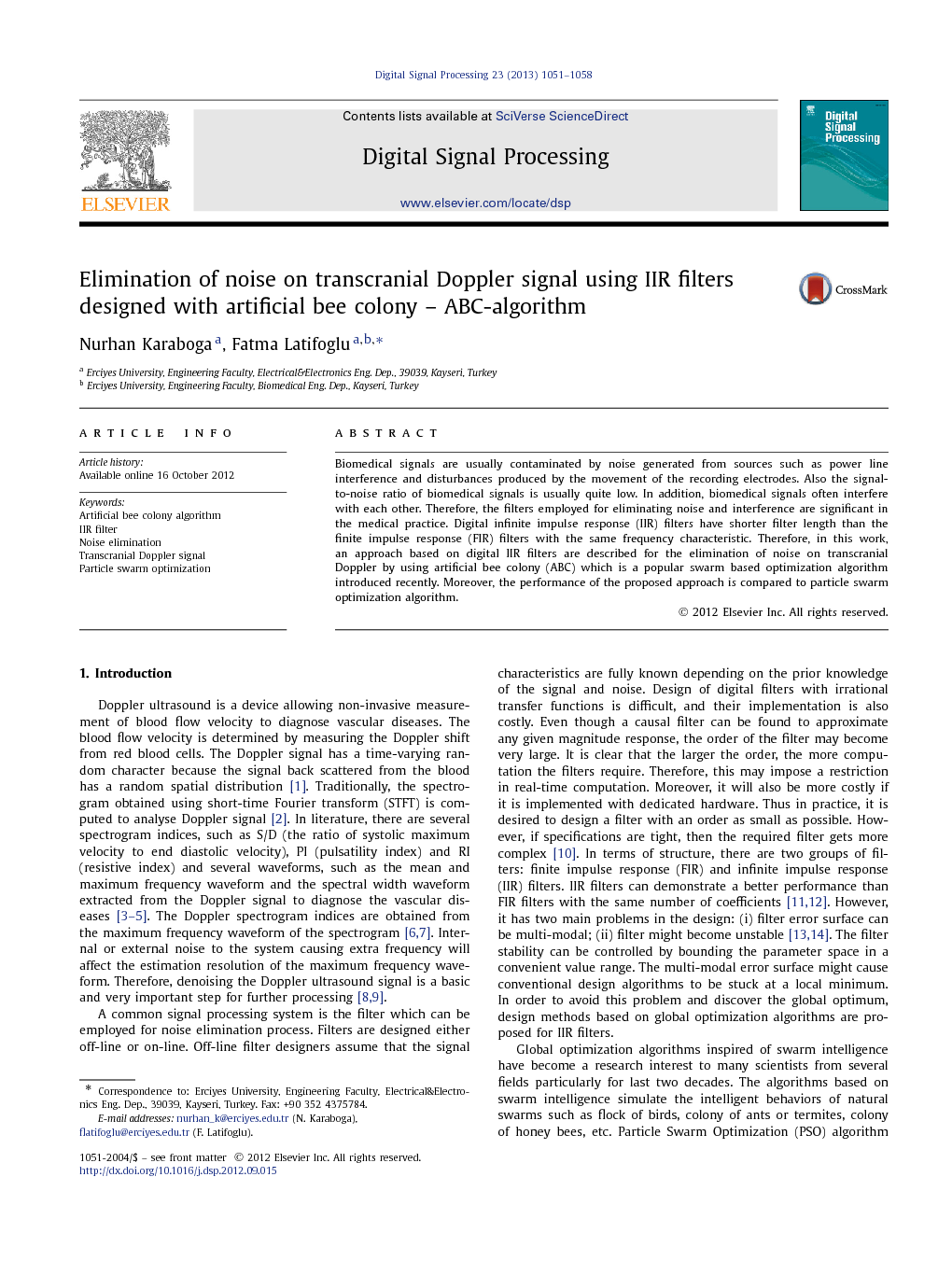 Biomedical signals are usually contaminated by noise generated from sources such as power line interference and disturbances produced by the movement of the recording electrodes. Also the signal-to-noise ratio of biomedical signals is usually quite low. In addition, biomedical signals often interfere with each other. Therefore, the filters employed for eliminating noise and interference are significant in the medical practice. Digital infinite impulse response (IIR) filters have shorter filter length than the finite impulse response (FIR) filters with the same frequency characteristic. Therefore, in this work, an approach based on digital IIR filters are described for the elimination of noise on transcranial Doppler by using artificial bee colony (ABC) which is a popular swarm based optimization algorithm introduced recently. Moreover, the performance of the proposed approach is compared to particle swarm optimization algorithm.

Doppler ultrasound is a device allowing non-invasive measurement of blood flow velocity to diagnose vascular diseases. The blood flow velocity is determined by measuring the Dopplershift from red blood cells. The Doppler signal has a time-varying random character because the signal back scattered from the bloodhas a random spatial distribution [1]. Traditionally, the spectrogram obtained using short-time Fourier transform (STFT) is computed to analyse Doppler signal [2]. In literature, there are several spectrogram indices, such as S/D (the ratio of systolic maximum velocity to end diastolic velocity), PI (pulsatility index) and RI (resistive index) and several waveforms, such as the mean and maximum frequency waveform and the spectral width waveform extracted from the Doppler signal to diagnose the vascular diseases [3–5]. The Doppler spectrogram indices are obtained from the maximum frequency waveform of the spectrogram [6,7]. Internal or external noise to the system causing extra frequency will affect the estimation resolution of the maximum frequency waveform.Therefore, denoising the Doppler ultrasound signal is a basicand very important step for further processing [8,9].A common signal processing system is the filter which can be employed for noise elimination process. Filters are designed either off-line or on-line. Off-line filter designers assume that the signal characteristics are fully known depending on the prior knowledgeof the signal and noise.Design of digital filters with irrational transfer functions is difficult, and their implementation is also costly. Even though a causal filter can be found to approximate any given magnitude response, the order of the filter may become very large. It is clear that the larger the order, the more computation the filters require. Therefore, this may impose a restriction in real-time computation. Moreover, it will also be more costly if it is implemented with dedicated hardware. Thus in practice, it is desired to design a filter with an order as small as possible. However, if specifications are tight, then the required filter gets more complex [10]. In terms of structure, there are two groups of filters: finite impulse response (FIR) and infinite impulse response (IIR) filters. IIR filters can demonstrate a better performance than FIR filters with the same number of coefficients [11,12]. However, it has two main problems in the design: (i) filter error surface can be multi-modal; (ii) filter might become unstable [13,14]. The filter stability can be controlled by bounding the parameter space in a convenient value range. The multi-modal error surface might cause conventional design algorithms to be stuck at a local minimum. In order to avoid this problem and discover the global optimum, design methods based on global optimization algorithms are proposed for IIR filters. Global optimization algorithms inspired of swarm intelligence have become a research interest to many scientists from several fields particularly for last two decades. The algorithms based on swarm intelligence simulate the intelligent behaviors of natural swarms such as flock of birds, colony of ants or termites, colony of honey bees, etc. Particle Swarm Optimization (PSO) algorithmis a swarm based optimization technique inspired by social behavior of bird flocking [15]. The PSO algorithm was first introducedby Eberhart and Kennedy in 1995 and employed particularly to solve numerical optimization problems. PSO maintains a swarm of particles each of which represents a potential solution to the problem [16]. Ant colony optimization (ACO) simulates the foraging behavior of ant colonies and a possible way between the nest and the food source corresponds to a possible solution to the problem[17]. Motivated by the foraging behavior of honeybees, in 2005 artificial bee colony (ABC) algorithm was originally introduced forsolving numerical optimization problems [18]. Although ABC is arelatively new swarm intelligence-based optimization approach, ithas been applied to solve several problems from different applicationareas [19]. ABC is simple, quite robust and flexible optimizationalgorithm [20,21]. In this work, a novel approach based on ABC algorithm is proposed to denoise Doppler signal using IIR filter.The paper is organized as the following: Section 2 describes ABC algorithm in detail. Section3provides an overview of thenoise cancellation process. In Section 4, the application of the proposed method based on ABC to the noise cancellation problem is described and its performance is compared to PSO algorithm, and then the simulation results are discussed.

An IIR filter design approach based on ABC algorithm is describedfor the elimination of noise on transcranial Doppler. Theperformance of the proposed approach was examined for 2 dBSNR value for the elimination of noise on the transcranial Dopplersignal. The simulation results obtained showed that the IIR filterscan be designed very well for denoising process by ABC algorithm.Consequently, the proposed method was able to improve the disturbed transcranial Doppler signal and made it acceptable for further analysis. Hence, spectrogram indexes widely used in clinical applications can be obtained accurately from maximum frequency curves.