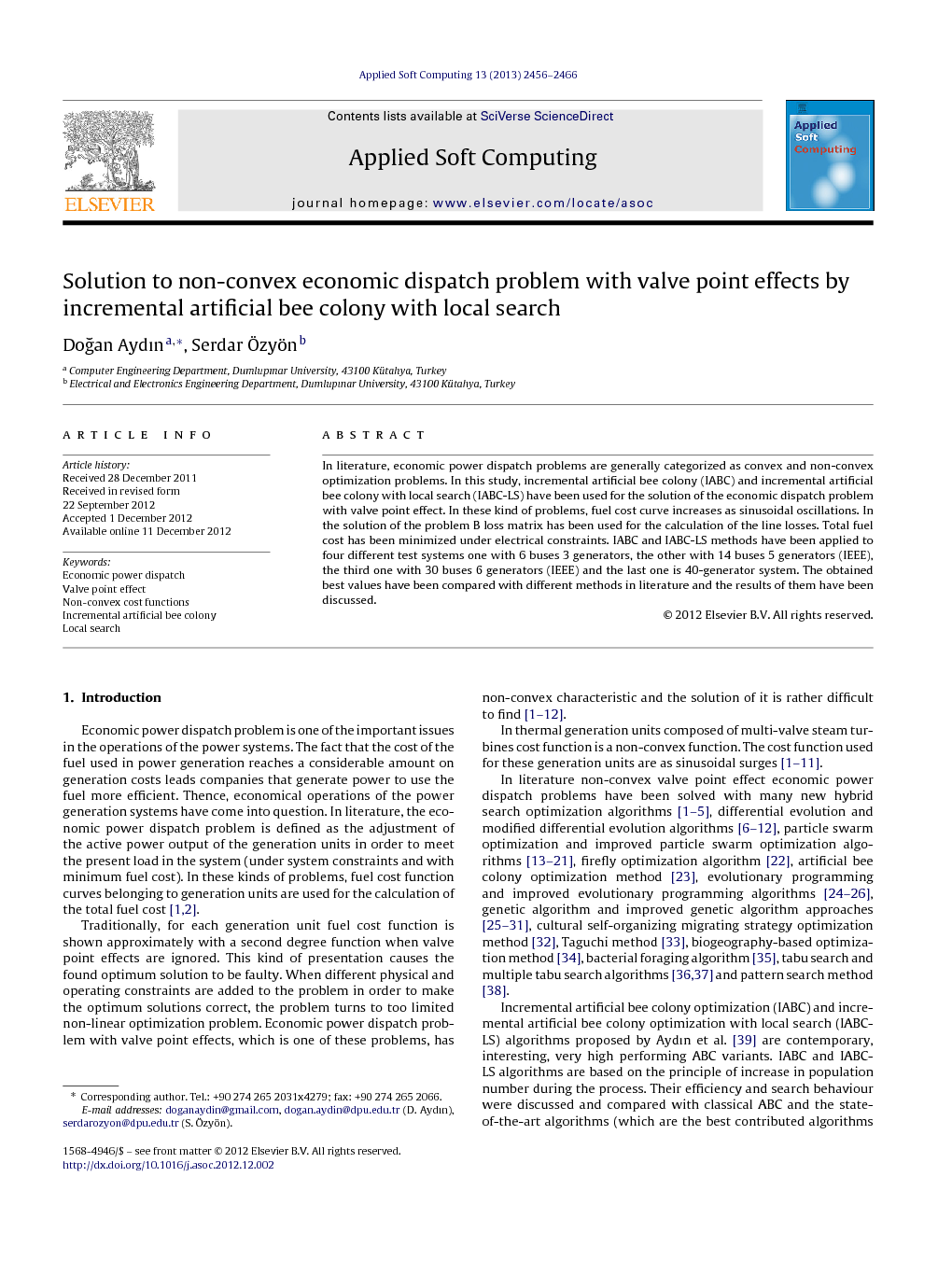 In literature, economic power dispatch problems are generally categorized as convex and non-convex optimization problems. In this study, incremental artificial bee colony (IABC) and incremental artificial bee colony with local search (IABC-LS) have been used for the solution of the economic dispatch problem with valve point effect. In these kind of problems, fuel cost curve increases as sinusoidal oscillations. In the solution of the problem B loss matrix has been used for the calculation of the line losses. Total fuel cost has been minimized under electrical constraints. IABC and IABC-LS methods have been applied to four different test systems one with 6 buses 3 generators, the other with 14 buses 5 generators (IEEE), the third one with 30 buses 6 generators (IEEE) and the last one is 40-generator system. The obtained best values have been compared with different methods in literature and the results of them have been discussed.

Economic power dispatch problem is one of the important issues in the operations of the power systems. The fact that the cost of the fuel used in power generation reaches a considerable amount on generation costs leads companies that generate power to use the fuel more efficient. Thence, economical operations of the power generation systems have come into question. In literature, the economic power dispatch problem is defined as the adjustment of the active power output of the generation units in order to meet the present load in the system (under system constraints and with minimum fuel cost). In these kinds of problems, fuel cost function curves belonging to generation units are used for the calculation of the total fuel cost [1] and [2].Traditionally, for each generation unit fuel cost function is shown approximately with a second degree function when valve point effects are ignored. This kind of presentation causes the found optimum solution to be faulty. When different physical and operating constraints are added to the problem in order to make the optimum solutions correct, the problem turns to too limited non-linear optimization problem. Economic power dispatch problem with valve point effects, which is one of these problems, has non-convex characteristic and the solution of it is rather difficult to find [1], [2], [3], [4], [5], [6], [7], [8], [9], [10], [11] and [12]. In thermal generation units composed of multi-valve steam turbines cost function is a non-convex function. The cost function used for these generation units are as sinusoidal surges [1], [2], [3], [4], [5], [6], [7], [8], [9], [10] and [11]. In literature non-convex valve point effect economic power dispatch problems have been solved with many new hybrid search optimization algorithms [1], [2], [3], [4] and [5], differential evolution and modified differential evolution algorithms [6], [7], [8], [9], [10], [11] and [12], particle swarm optimization and improved particle swarm optimization algorithms [13], [14], [15], [16], [17], [18], [19], [20] and [21], firefly optimization algorithm [22], artificial bee colony optimization method [23], evolutionary programming and improved evolutionary programming algorithms [24], [25] and [26], genetic algorithm and improved genetic algorithm approaches [25], [26], [27], [28], [29], [30] and [31], cultural self-organizing migrating strategy optimization method [32], Taguchi method [33], biogeography-based optimization method [34], bacterial foraging algorithm [35], tabu search and multiple tabu search algorithms [36] and [37] and pattern search method [38]. Incremental artificial bee colony optimization (IABC) and incremental artificial bee colony optimization with local search (IABC-LS) algorithms proposed by Aydın et al. [39] are contemporary, interesting, very high performing ABC variants. IABC and IABC-LS algorithms are based on the principle of increase in population number during the process. Their efficiency and search behaviour were discussed and compared with classical ABC and the state-of-the-art algorithms (which are the best contributed algorithms in Soft Computing Journal special issue about large-scale continuous optimization [40]) in our previous work [39]. IABC and IABC-LS have shown an equal or better performance than other state-of-the-art algorithms, and they are significantly better than classical ABC algorithm. However, outstanding performances on a set of benchmarks may not guarantee a similar performance on every practical optimization problem too as it is well-nigh impossible to model all the complexities of the real world problems by a limited set of benchmarks.Therefore, importance of this study we worked here arises from the following reasons:We have presented a new variant of ABC. It is based on incremental social learning behaviour. •We have tried to understand real strength of IABC and IABC-LS algorithms by testing them on hard real-world problems. As a case study, we have taken non-convex economic power dispatch problem with valve-point effect for this study. •For the tackling test problems here, we worked on discovering new better solutions. •We have shown the importance of hybridizing local search procedure with swarm intelligence technique. To do this, Mtsls1 local search procedure is called at the each iteration of the IABC algorithm with an intelligent way. •In algorithm parameter configuration, we have used automatic parameter tuning algorithm, Iterative F-race [41] and [42]. We believe that parameter tuning task is necessary to obtain better results for a stochastic algorithm. However many researchers have selected parameter values with an ad-hoc way. We have indicated the importance of parameter tuning by obtaining better results than other approaches.

In this study, for the solution of the non-convex valve point effect economic power dispatch problem, IABC and IABC-LS methods have been applied to 6, 14 and 30 bus test systems of IEEE. Then, finally we have compared our algorithms with several approaches in literature on system with 40 generators. The results obtained by IABC and IABC-LS methods have been seen to have converged to the results given in literature and to have been better than all the methods that have been compared. IABC algorithm, which is an improved variation of classical ABC algorithm, depends on the principle of incremental social learning. Another characteristic of this algorithm is that it can form simple and reasonable hybrid structures together with local search procedures and can obtain better and more stable results. In this kind of algorithms, since the selection of the parameter values plays an important role in the performance of the algorithm, in this study Iterated F-race algorithm, which realizes the automatic parameter configuration successfully, has been preferred. Consequently, together with the benchmark function instances, it can be said that in the solution of the real problems where there are too many constraints it is more advantageous to use IABC and IABC-LS algorithms. In the studies that will be done in the future, IABC and IABC-LS algorithms will be applied to other energy problems such as economic power dispatch problems with prohibited operation zone, environmental economic power dispatch problems and short-term hydrothermal power dispatch problems, and also other engineering optimization problems.