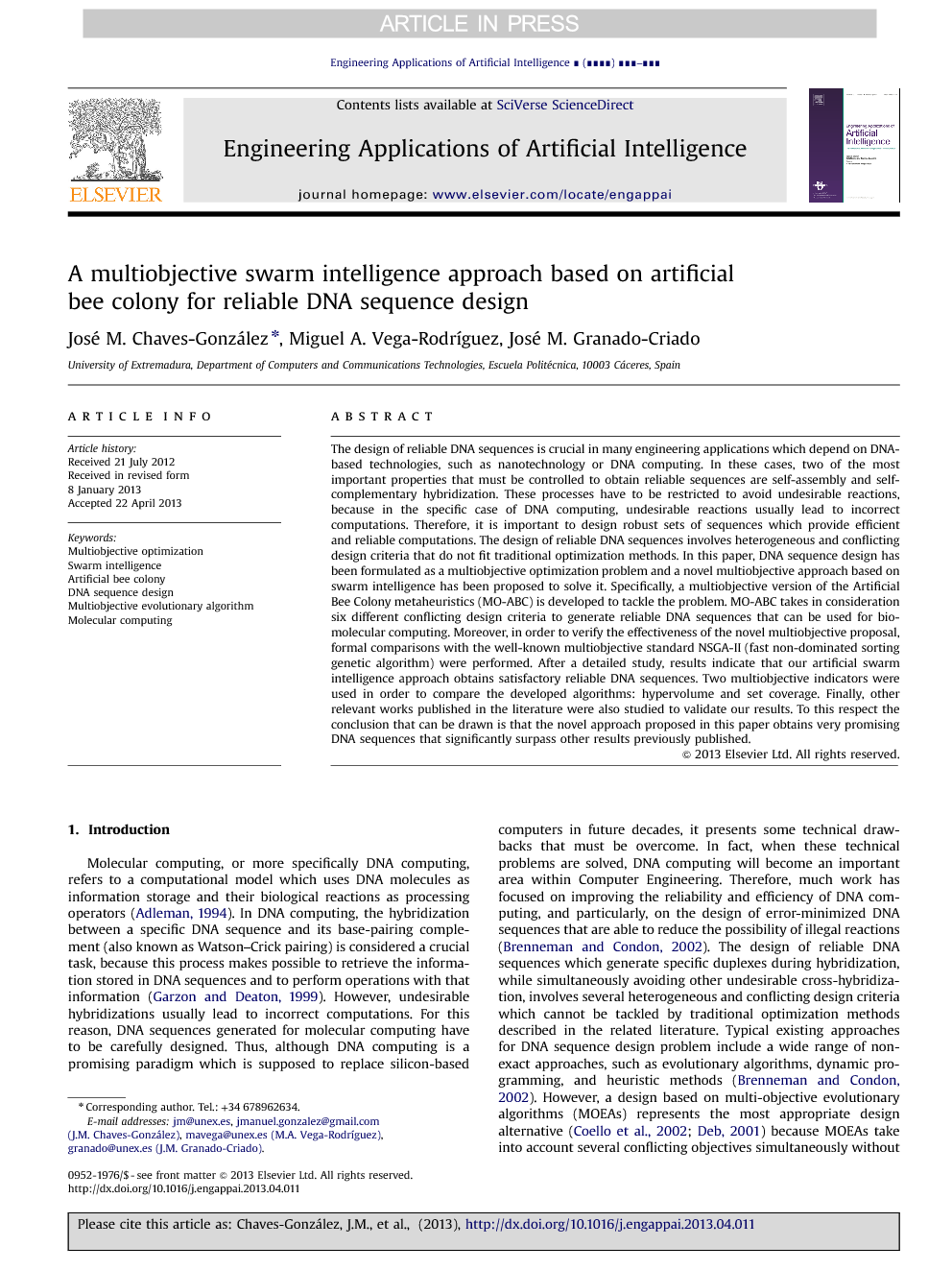 The design of reliable DNA sequences is crucial in many engineering applications which depend on DNA-based technologies, such as nanotechnology or DNA computing. In these cases, two of the most important properties that must be controlled to obtain reliable sequences are self-assembly and self-complementary hybridization. These processes have to be restricted to avoid undesirable reactions, because in the specific case of DNA computing, undesirable reactions usually lead to incorrect computations. Therefore, it is important to design robust sets of sequences which provide efficient and reliable computations. The design of reliable DNA sequences involves heterogeneous and conflicting design criteria that do not fit traditional optimization methods. In this paper, DNA sequence design has been formulated as a multiobjective optimization problem and a novel multiobjective approach based on swarm intelligence has been proposed to solve it. Specifically, a multiobjective version of the Artificial Bee Colony metaheuristics (MO-ABC) is developed to tackle the problem. MO-ABC takes in consideration six different conflicting design criteria to generate reliable DNA sequences that can be used for bio-molecular computing. Moreover, in order to verify the effectiveness of the novel multiobjective proposal, formal comparisons with the well-known multiobjective standard NSGA-II (fast non-dominated sorting genetic algorithm) were performed. After a detailed study, results indicate that our artificial swarm intelligence approach obtains satisfactory reliable DNA sequences. Two multiobjective indicators were used in order to compare the developed algorithms: hypervolume and set coverage. Finally, other relevant works published in the literature were also studied to validate our results. To this respect the conclusion that can be drawn is that the novel approach proposed in this paper obtains very promising DNA sequences that significantly surpass other results previously published.

Molecular computing, or more specifically DNA computing, refers to a computational model which uses DNA molecules as information storage and their biological reactions as processing operators (Adleman, 1994). In DNA computing, the hybridization between a specific DNA sequence and its base-pairing complement (also known as Watson–Crick pairing) is considered a crucial task, because this process makes possible to retrieve the information stored in DNA sequences and to perform operations with that information (Garzon and Deaton, 1999). However, undesirable hybridizations usually lead to incorrect computations. For this reason, DNA sequences generated for molecular computing have to be carefully designed. Thus, although DNA computing is a promising paradigm which is supposed to replace silicon-based computers in future decades, it presents some technical drawbacks that must be overcome. In fact, when these technical problems are solved, DNA computing will become an important area within Computer Engineering. Therefore, much work has focused on improving the reliability and efficiency of DNA computing, and particularly, on the design of error-minimized DNA sequences that are able to reduce the possibility of illegal reactions (Brenneman and Condon, 2002). The design of reliable DNA sequences which generate specific duplexes during hybridization, while simultaneously avoiding other undesirable cross-hybridization, involves several heterogeneous and conflicting design criteria which cannot be tackled by traditional optimization methods described in the related literature. Typical existing approaches for DNA sequence design problem include a wide range of non-exact approaches, such as evolutionary algorithms, dynamic programming, and heuristic methods (Brenneman and Condon, 2002). However, a design based on multi-objective evolutionary algorithms (MOEAs) represents the most appropriate design alternative (Coello et al., 2002 and Deb, 2001) because MOEAs take into account several conflicting objectives simultaneously without the artificial adjustments which are included in classical mono-objective optimization methods. These approaches usually include the use of different weighting factors assigned to each objective. This paper proposes a new DNA sequence design evolutionary approach based on multiobjective swarm intelligence to automatically generate reliable DNA strands that can be applied to molecular computing (a promising area in Computer Engineering). Specifically, the artificial bee colony algorithm (Karaboga and Akay, 2009) was adapted with the inclusion of several multiobjective features, such as the idea of non-dominated solutions or the concept of non-dominated sorting (Deb et al., 2001). Furthermore, our approach is compared against the well-known multiobjective standard NSGA-II (fast non-dominated sorting genetic algorithm (Deb et al., 2001)). Finally, our results are validated by using other works published in the literature. As will be discussed, our approach generates more reliable DNA sequences for DNA computing than other relevant approaches previously published.The rest of this work is organized as follows: Section 2 discusses related work. Section 3 describes the basic background on the problem and the multiobjective formulation followed. The metaheuristics which have been developed are explained in Section 4. Section 5 is devoted to present and analyze the results. In Section 6, our approach is compared with other methods published in the literature. Finally, Section 7 summarizes the conclusions of the paper.

In this work, it has been proposed the use of a new multiobjective approach based on Artificial Bee Colony (ABC) metaheuristics (MO-ABC) for the design of reliable DNA sequences that can be applied to molecular computing. MO-ABC is able to obtain sets of sequences which simultaneously minimize similarity, H-measure, continuity and hairpin of each generated sequence in the set. Solutions are also restricted for a specific melting temperature and GC ratio which provide even more stable sequences. Furthermore, a well-known MOEA was also developed to solve the problem: the Fast Non-Dominated Sorting Genetic Algorithm (NSGA-II). Results provided by this approach were compared with results from our proposed metaheuristics by using multiobjective metrics to ensure the accuracy of MO-ABC. Hypervolume indicator and the coverage relation were applied to present our multiobjective results. Moreover, each experiment is supported by a statistical analysis that demonstrates its statistical relevance. Three different real-world datasets proposed by different authors were used to ensure the effectiveness of our algorithms. These data sets include different number of sequences, number of nucleotides per sequence and restrictions, and all of them have been successfully used for DNA computing. MO-ABC can generate better sequences taking in consideration all the objectives and restrictions than other approaches previously published in the literature. Due to the good results obtained with MO-ABC, as future work, it could be interesting to work with other multiobjective approaches based on swarm intelligence that can be applied to the problem. It is possible that a hybrid version of MO-ABC with other multi-objective approach could provide very interesting results. In addition to this, it would be interesting to generate even larger sets of sequences by applying parallel computing together with evolutionary computation. MOEAs generally takes significant CPU time to find optimal sequence sets, because the high difficulty of the design problem addressed is combined with the explorative behavior of evolutionary algorithms.