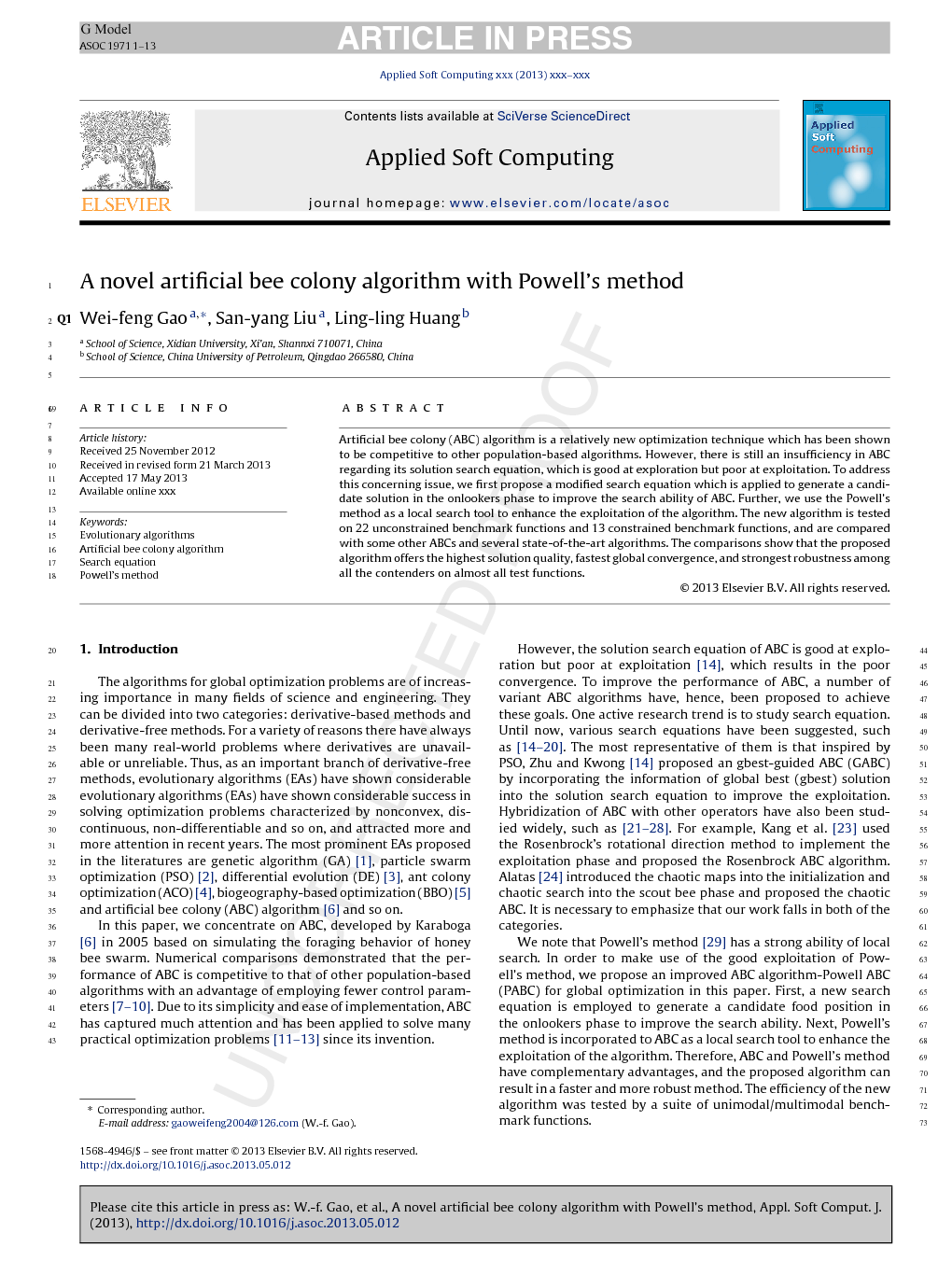 Artificial bee colony (ABC) algorithm is a relatively new optimization technique which has been shown to be competitive to other population-based algorithms. However, there is still an insufficiency in ABC regarding its solution search equation, which is good at exploration but poor at exploitation. To address this concerning issue, we first propose a modified search equation which is applied to generate a candidate solution in the onlookers phase to improve the search ability of ABC. Further, we use the Powell's method as a local search tool to enhance the exploitation of the algorithm. The new algorithm is tested on 22 unconstrained benchmark functions and 13 constrained benchmark functions, and are compared with some other ABCs and several state-of-the-art algorithms. The comparisons show that the proposed algorithm offers the highest solution quality, fastest global convergence, and strongest robustness among all the contenders on almost all test functions.

The algorithms for global optimization problems are of increasing importance in many fields of science and engineering. They can be divided into two categories: derivative-based methods and derivative-free methods. For a variety of reasons there have always been many real-world problems where derivatives are unavailable or unreliable. Thus, as an important branch of derivative-free methods, evolutionary algorithms (EAs) have shown considerable evolutionary algorithms (EAs) have shown considerable success in solving optimization problems characterized by nonconvex, discontinuous, non-differentiable and so on, and attracted more and more attention in recent years. The most prominent EAs proposed in the literatures are genetic algorithm (GA) [1], particle swarm optimization (PSO) [2], differential evolution (DE) [3], ant colony optimization (ACO) [4], biogeography-based optimization (BBO) [5] and artificial bee colony (ABC) algorithm [6] and so on.In this paper, we concentrate on ABC, developed by Karaboga [6] in 2005 based on simulating the foraging behavior of honey bee swarm. Numerical comparisons demonstrated that the performance of ABC is competitive to that of other population-based algorithms with an advantage of employing fewer control parameters [7], [8], [9] and [10]. Due to its simplicity and ease of implementation, ABC has captured much attention and has been applied to solve many practical optimization problems [11], [12] and [13] since its invention.However, the solution search equation of ABC is good at exploration but poor at exploitation [14], which results in the poor convergence. To improve the performance of ABC, a number of variant ABC algorithms have, hence, been proposed to achieve these goals. One active research trend is to study search equation. Until now, various search equations have been suggested, such as [14], [15], [16], [17], [18], [19] and [20]. The most representative of them is that inspired by PSO, Zhu and Kwong [14] proposed an gbest-guided ABC (GABC) by incorporating the information of global best (gbest) solution into the solution search equation to improve the exploitation. Hybridization of ABC with other operators have also been studied widely, such as [21], [22], [23], [24], [25], [26], [27] and [28]. For example, Kang et al. [23] used the Rosenbrock's rotational direction method to implement the exploitation phase and proposed the Rosenbrock ABC algorithm. Alatas [24] introduced the chaotic maps into the initialization and chaotic search into the scout bee phase and proposed the chaotic ABC. It is necessary to emphasize that our work falls in both of the categories.We note that Powell's method [29] has a strong ability of local search. In order to make use of the good exploitation of Powell's method, we propose an improved ABC algorithm-Powell ABC (PABC) for global optimization in this paper. First, a new search equation is employed to generate a candidate food position in the onlookers phase to improve the search ability. Next, Powell's method is incorporated to ABC as a local search tool to enhance the exploitation of the algorithm. Therefore, ABC and Powell's method have complementary advantages, and the proposed algorithm can result in a faster and more robust method. The efficiency of the new algorithm was tested by a suite of unimodal/multimodal benchmark functions. The rest of this paper is organized as follows. Section 2 summarizes artificial bee colony algorithm. Powell's method is reviewed in Section 3. The proposed PABC approach is presented in Section 4. Section 5 presents and discusses the experimental results. Finally, the conclusion is drawn in Section 6.

To the problem of the poor convergence in ABC, we first propose an improved search equation used in in the onlookers phase to improve the search ability. Next, Powell's method is introduced to ABC as a local search tool to enhance the exploitation of the algorithm. Finally, comprehensive experimental tests have been conducted on 22 unconstrained benchmark functions and 13 constrained benchmark functions. The experimental results show the effectiveness of the modified search equation and the Powell's method. PABC significantly surpasses other compared algorithms on almost all test functions, contributing to higher solution accuracy, faster convergence speed, and stronger algorithm reliability. It is desirable to further apply PABC to solving those more complex real-world continuous optimization problems, such as clustering, data mining, design and optimization of communication networks. The future work also includes the studies on how to extend PABC to handle those combinatorial optimization problems, such as flow shop scheduling problem, vehicle routing problem and traveling salesman problem.