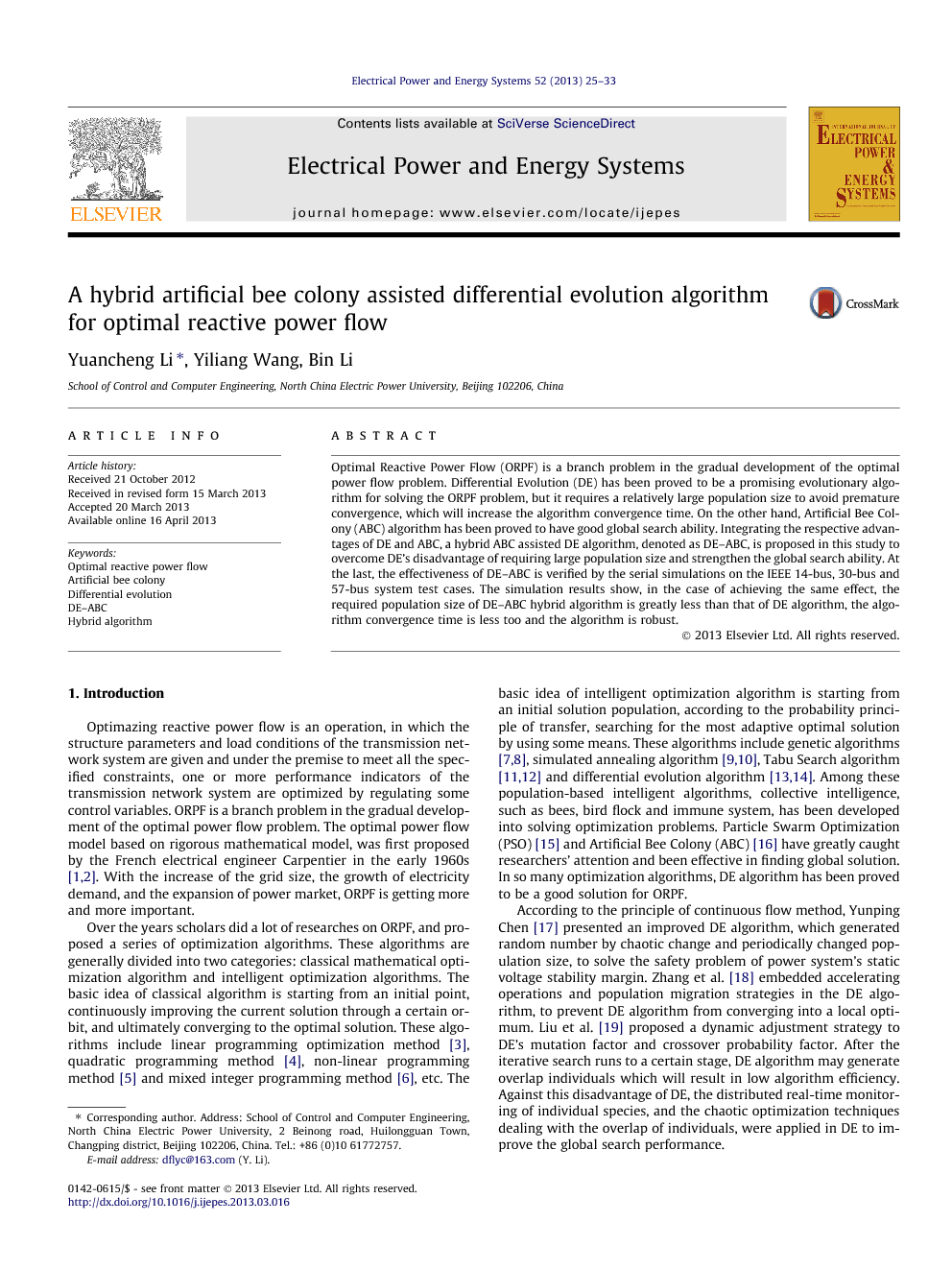 Optimal Reactive Power Flow (ORPF) is a branch problem in the gradual development of the optimal power flow problem. Differential Evolution (DE) has been proved to be a promising evolutionary algorithm for solving the ORPF problem, but it requires a relatively large population size to avoid premature convergence, which will increase the algorithm convergence time. On the other hand, Artificial Bee Colony (ABC) algorithm has been proved to have good global search ability. Integrating the respective advantages of DE and ABC, a hybrid ABC assisted DE algorithm, denoted as DE–ABC, is proposed in this study to overcome DE’s disadvantage of requiring large population size and strengthen the global search ability. At the last, the effectiveness of DE–ABC is verified by the serial simulations on the IEEE 14-bus, 30-bus and 57-bus system test cases. The simulation results show, in the case of achieving the same effect, the required population size of DE–ABC hybrid algorithm is greatly less than that of DE algorithm, the algorithm convergence time is less too and the algorithm is robust.

Optimazing reactive power flow is an operation, in which the structure parameters and load conditions of the transmission network system are given and under the premise to meet all the specified constraints, one or more performance indicators of the transmission network system are optimized by regulating some control variables. ORPF is a branch problem in the gradual development of the optimal power flow problem. The optimal power flow model based on rigorous mathematical model, was first proposed by the French electrical engineer Carpentier in the early 1960s [1] and [2]. With the increase of the grid size, the growth of electricity demand, and the expansion of power market, ORPF is getting more and more important. Over the years scholars did a lot of researches on ORPF, and proposed a series of optimization algorithms. These algorithms are generally divided into two categories: classical mathematical optimization algorithm and intelligent optimization algorithms. The basic idea of classical algorithm is starting from an initial point, continuously improving the current solution through a certain orbit, and ultimately converging to the optimal solution. These algorithms include linear programming optimization method [3], quadratic programming method [4], non-linear programming method [5] and mixed integer programming method [6], etc. The basic idea of intelligent optimization algorithm is starting from an initial solution population, according to the probability principle of transfer, searching for the most adaptive optimal solution by using some means. These algorithms include genetic algorithms [7] and [8], simulated annealing algorithm [9] and [10], Tabu Search algorithm [11] and [12] and differential evolution algorithm [13] and [14]. Among these population-based intelligent algorithms, collective intelligence, such as bees, bird flock and immune system, has been developed into solving optimization problems. Particle Swarm Optimization (PSO) [15] and Artificial Bee Colony (ABC) [16] have greatly caught researchers’ attention and been effective in finding global solution. In so many optimization algorithms, DE algorithm has been proved to be a good solution for ORPF. According to the principle of continuous flow method, Yunping Chen [17] presented an improved DE algorithm, which generated random number by chaotic change and periodically changed population size, to solve the safety problem of power system’s static voltage stability margin. Zhang et al. [18] embedded accelerating operations and population migration strategies in the DE algorithm, to prevent DE algorithm from converging into a local optimum. Liu et al. [19] proposed a dynamic adjustment strategy to DE’s mutation factor and crossover probability factor. After the iterative search runs to a certain stage, DE algorithm may generate overlap individuals which will result in low algorithm efficiency. Against this disadvantage of DE, the distributed real-time monitoring of individual species, and the chaotic optimization techniques dealing with the overlap of individuals, were applied in DE to improve the global search performance. Varadarajan and Swarup [20] modeled ORPF as a mixed-integer nonlinear constrained optimization problem, considered voltage security constraints in the premise, used DE algorithm to solve ORPF problem which mixed continuous and discrete variables. They adjusted the generator voltage, the transformer tap position, and the amount of reactive power compensation devices to minimize the active power network losses. Basu [21] proposed application of DE algorithm to solve optimal power flow control problem with FACTS devices, the considered FACTS devices included TCSC and TCPS. Abbasy et al. [22] proposed a distributed grid technology oriented multi-agent DE algorithm to solve ORPF problem based on the flow optimization, which took the sum of system reactive power cost and the active power loss as the minimum optimization goal, and the performance of the proposed algorithm was tested in IEEE 30-bus system test case.ABC algorithm simulates the intelligent behavior of honey bee swarm and has been applied in power system to solve complex, multimodal and non-separate problems. With few parameters, ABC is simple to implement and efficient and robust compared to other algorithms [23]. Due to foods information distributed through whole bees, that ABC is good at exploration but poor at exploitation means it is insufficient to apply existing information to find better solution. Also it has convergence speed problem in some complex issues. In order to cope with these disadvantages, many version ABC are developed for specific circumstances [24]. Through analysis of articles about the ORPF problem, we recognized that DE had been proved to be a promising evolutionary algorithm for solving the ORPF problem, but it requires a relatively large population size to avoid premature convergence, which will increase the algorithm convergence time, which is fatal for the online application of solving ORPF problem. In order to overcome this shortage of DE, we propose a hybrid ABC assisted DE algorithm by bringing the ABC algorithm’s local search and global search ideas, denoted as DE–ABC. More clearly, in the DE algorithm we add the bee colony accelerating evolution process and the bee colony detecting operation, which can reduce the required population size while improving the search performance.The paper is organized as follows. The ORPF problem formulation is first reviewed in Section 2. Then, Section 3 introduces the proposed DE–ABC hybrid algorithm, and explains how to combine DE and ABC in DE–ABC. In Section 4, the effectiveness of DE–ABC is verified by serial simulations on the IEEE 14-bus, 30-bus and 57-bus system test cases. Finally, Section 5 concludes the paper.