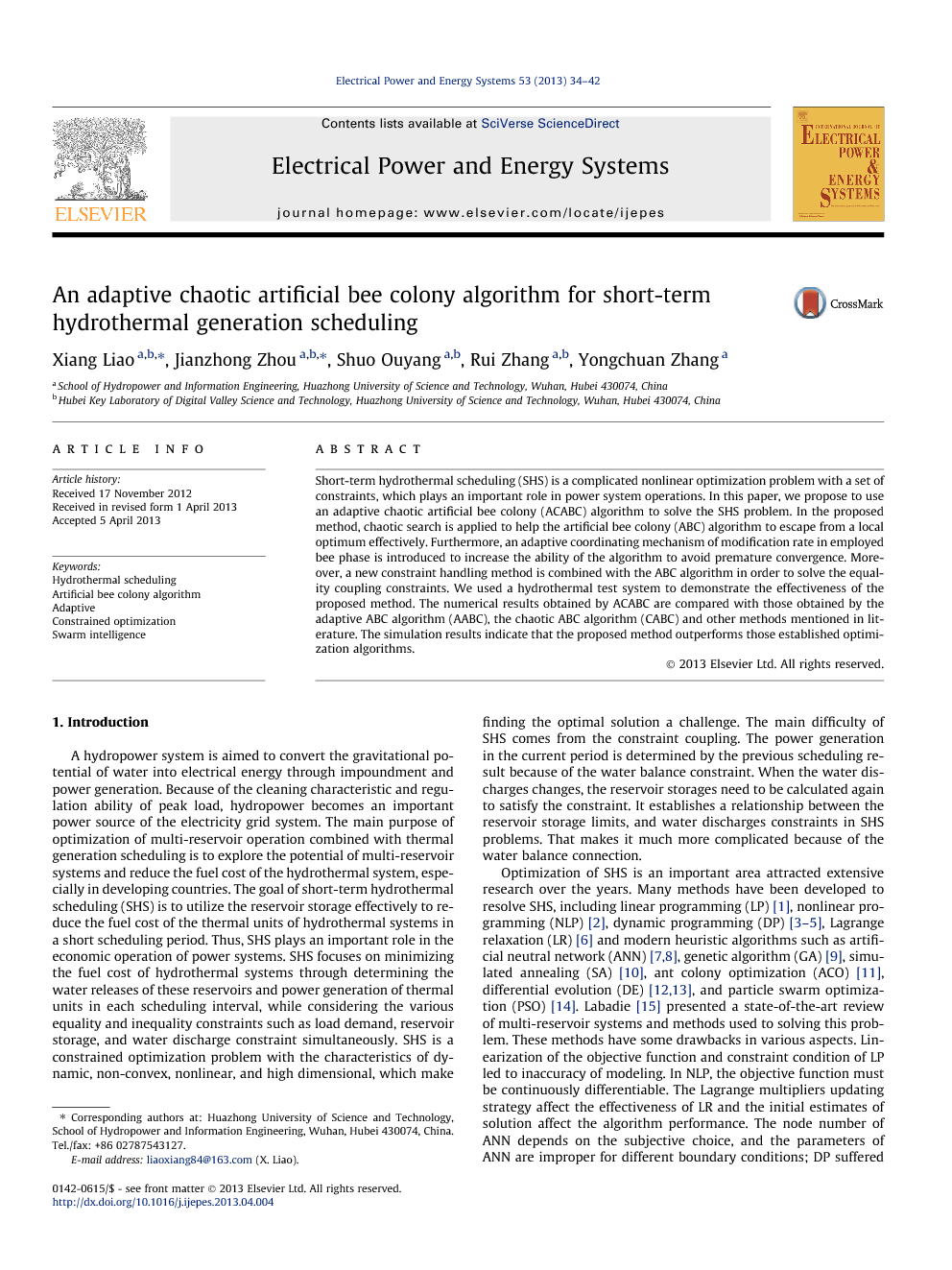 Short-term hydrothermal scheduling (SHS) is a complicated nonlinear optimization problem with a set of constraints, which plays an important role in power system operations. In this paper, we propose to use an adaptive chaotic artificial bee colony (ACABC) algorithm to solve the SHS problem. In the proposed method, chaotic search is applied to help the artificial bee colony (ABC) algorithm to escape from a local optimum effectively. Furthermore, an adaptive coordinating mechanism of modification rate in employed bee phase is introduced to increase the ability of the algorithm to avoid premature convergence. Moreover, a new constraint handling method is combined with the ABC algorithm in order to solve the equality coupling constraints. We used a hydrothermal test system to demonstrate the effectiveness of the proposed method. The numerical results obtained by ACABC are compared with those obtained by the adaptive ABC algorithm (AABC), the chaotic ABC algorithm (CABC) and other methods mentioned in literature. The simulation results indicate that the proposed method outperforms those established optimization algorithms.

A hydropower system is aimed to convert the gravitational potential of water into electrical energy through impoundment and power generation. Because of the cleaning characteristic and regulation ability of peak load, hydropower becomes an important power source of the electricity grid system. The main purpose of optimization of multi-reservoir operation combined with thermal generation scheduling is to explore the potential of multi-reservoir systems and reduce the fuel cost of the hydrothermal system, especially in developing countries. The goal of short-term hydrothermal scheduling (SHS) is to utilize the reservoir storage effectively to reduce the fuel cost of the thermal units of hydrothermal systems in a short scheduling period. Thus, SHS plays an important role in the economic operation of power systems. SHS focuses on minimizing the fuel cost of hydrothermal systems through determining the water releases of these reservoirs and power generation of thermal units in each scheduling interval, while considering the various equality and inequality constraints such as load demand, reservoir storage, and water discharge constraint simultaneously. SHS is a constrained optimization problem with the characteristics of dynamic, non-convex, nonlinear, and high dimensional, which make finding the optimal solution a challenge. The main difficulty of SHS comes from the constraint coupling. The power generation in the current period is determined by the previous scheduling result because of the water balance constraint. When the water discharges changes, the reservoir storages need to be calculated again to satisfy the constraint. It establishes a relationship between the reservoir storage limits, and water discharges constraints in SHS problems. That makes it much more complicated because of the water balance connection. Optimization of SHS is an important area attracted extensive research over the years. Many methods have been developed to resolve SHS, including linear programming (LP) [1], nonlinear programming (NLP) [2], dynamic programming (DP) [3], [4] and [5], Lagrange relaxation (LR) [6] and modern heuristic algorithms such as artificial neutral network (ANN) [7] and [8], genetic algorithm (GA) [9], simulated annealing (SA) [10], ant colony optimization (ACO) [11], differential evolution (DE) [12] and [13], and particle swarm optimization (PSO) [14]. Labadie [15] presented a state-of-the-art review of multi-reservoir systems and methods used to solving this problem. These methods have some drawbacks in various aspects. Linearization of the objective function and constraint condition of LP led to inaccuracy of modeling. In NLP, the objective function must be continuously differentiable. The Lagrange multipliers updating strategy affect the effectiveness of LR and the initial estimates of solution affect the algorithm performance. The node number of ANN depends on the subjective choice, and the parameters of ANN are improper for different boundary conditions; DP suffered from the famous “curse of dimensionality”, which makes the amount of computations heavy with the dimension increasing. The solutions of modern heuristic algorithm such as GA, SA, ACO, DE, and PSO are easy to be trapped in a local optimum and then premature convergence happened. For these reasons, improving established optimization techniques and developing new efficient algorithms to resolve the SHS problem is a significant task to utilize water resources more effective. Much research was carried out to overcome these drawbacks of established algorithms and improve the effectiveness to resolve SHS in power systems. Wavelet transfer was combined with ANN to improve the ability of the algorithm in [16]. The real coding technique was applied in order to improve searching ability of GA in [17]. Parallel computation was adopted to improve the PSO algorithm in [18]. The proposed method provided a better scheduling result compare to the existing method. In literature [19], the chaotic local search technique has been adopted by scholar and applied in DE to resolve a dynamic economic dispatch problem. Efficiency and the searching ability of DE was enhanced in chaotic differential evolution algorithm with a better result. In literature [20], the self-adaptive inertia weight mechanism was combined with the PSO algorithm to determine the generation schedule of a cascaded hydro system located at Narmada river in India. Results demonstrated the effectiveness of the proposed method. These modifications have improved various aspects of optimization ability. However, due to the added parameters, the hybrid algorithms may become more complicated and unstable. In recent years, a new optimization technique named artificial bee colony (ABC) [21] and [22] algorithm becomes more and more popular because it performs powerful ability to handle various practical engineering problems. ABC has a simple structure and good convergence ability. However, the coordination of control parameters is a challenging and uphill task. On the other hand, similar with other modern heuristic algorithms, ABC also has the problem of premature convergence. Therefore, in this paper, we present an adaptive chaotic artificial bee colony algorithm (ACABC). Control parameter setting method and chaotic local search are applied to help the algorithm to escape from local optimal solution. Moreover, original version of ABC did not consider the constrained optimization problem. Hence, we propose a new constraint handling method with a modified version of ABC to resolve SHS with various constraints. The results show that the proposed ACABC has better convergence ability and convergence speed comparing to the existing methods. This paper is organized as follows. The objective function and constraints of an SHS problem are introduced in Section 2. Section 3 is an overview of the original ABC algorithm. Then in Section 4, the proposed ACABC algorithm is described in detail including the constraint handling method and chaotic local search mechanism. Section 5 shows the computation results to different algorithms in a well-known hydrothermal test system. At last, the conclusions and future research are outlined in Section 6.

An adaptive chaotic artificial bee colony algorithm has been applied to resolve the SHS problem of an interconnected power system. As a significant modification to prevent the premature of ABC, modification of the ABC algorithm is introduced in this paper. A method of constraint handing is introduced to resolve the coupling constraint of the SHS problem. Moreover, chaotic local search is applied to avoid premature convergence. The simulation results showed that the proposed method is capable of achieving the better solution comparing to the existing methods while satisfying the various constraints of the hydrothermal system. It has been concluded that the ACABC algorithm can improve the robustness of artificial bee colony and prevent premature convergence. ACABC can also be efficiently used for solving the SHS problem, and effectiveness of constraint handling method in this paper has been verified. The performance of the ABC algorithm in other reservoir’s operation problem will be investigated in future.