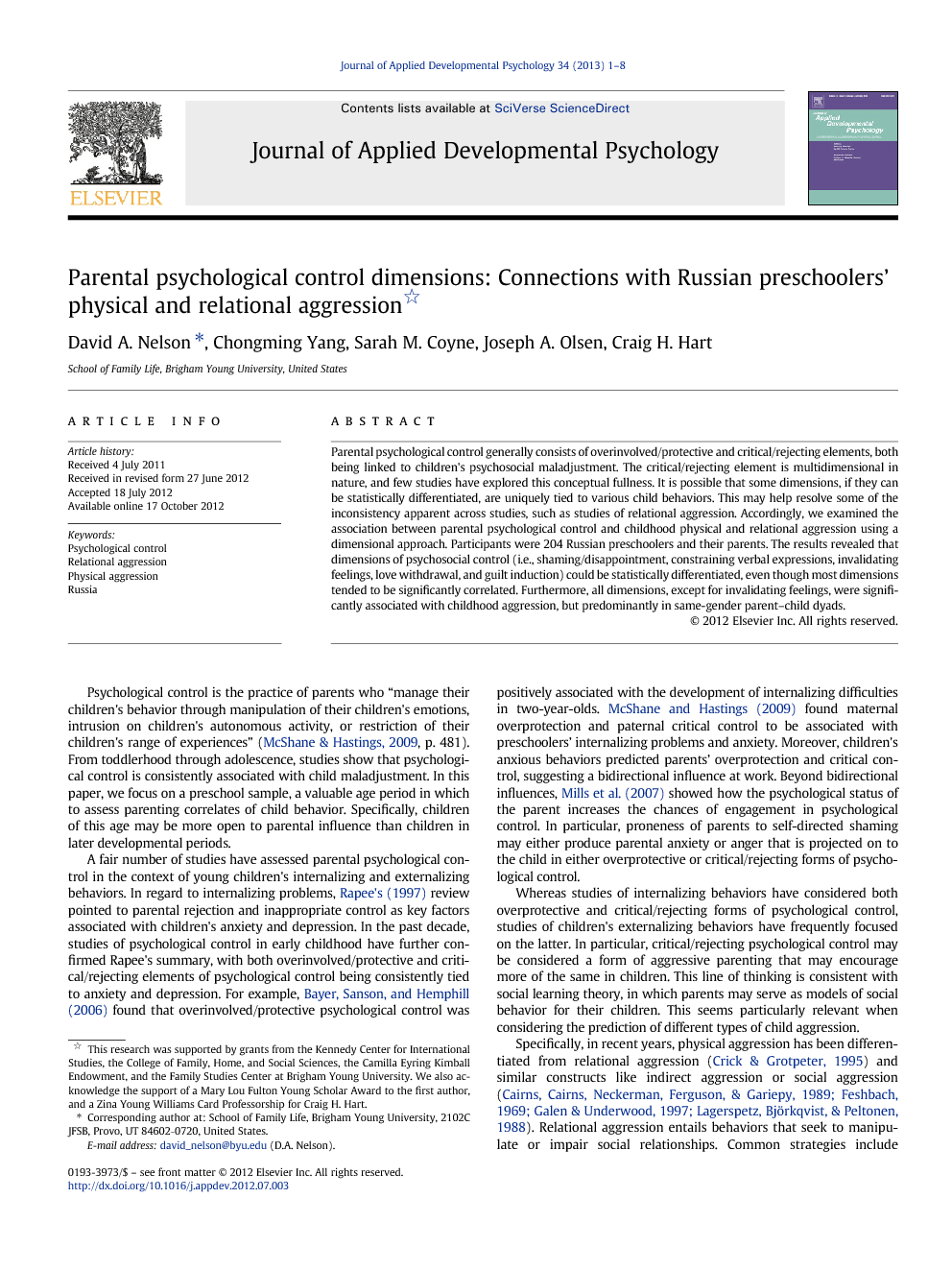 Parental psychological control generally consists of overinvolved/protective and critical/rejecting elements, both being linked to children's psychosocial maladjustment. The critical/rejecting element is multidimensional in nature, and few studies have explored this conceptual fullness. It is possible that some dimensions, if they can be statistically differentiated, are uniquely tied to various child behaviors. This may help resolve some of the inconsistency apparent across studies, such as studies of relational aggression. Accordingly, we examined the association between parental psychological control and childhood physical and relational aggression using a dimensional approach. Participants were 204 Russian preschoolers and their parents. The results revealed that dimensions of psychosocial control (i.e., shaming/disappointment, constraining verbal expressions, invalidating feelings, love withdrawal, and guilt induction) could be statistically differentiated, even though most dimensions tended to be significantly correlated. Furthermore, all dimensions, except for invalidating feelings, were significantly associated with childhood aggression, but predominantly in same-gender parent–child dyads.

Psychological control is the practice of parents who “manage their children's behavior through manipulation of their children's emotions, intrusion on children's autonomous activity, or restriction of their children's range of experiences” (McShane & Hastings, 2009, p. 481). From toddlerhood through adolescence, studies show that psychological control is consistently associated with child maladjustment. In this paper, we focus on a preschool sample, a valuable age period in which to assess parenting correlates of child behavior. Specifically, children of this age may be more open to parental influence than children in later developmental periods.

Measurement model of childhood aggression subtypes In regard to the measurement of childhood aggression, the multiple-group baseline CFA measurement model of the aggression constructs, allowing different factor loadings for boys and girls, fit the data satisfactorily; χ2 (95) = 135.95, p < .01, CFI = .99, TLI = .99, RMSEA = .07. The constrained model, χ2 (104) = 144.28, p < .01, CFI = .99, TLI = .99, RMSEA = .06, showed no significant decrement in the goodness of fit; χ2diff (9) = 10.30 p = .33. Thus, invariant measurement of the aggression constructs was obtained for boys and girls. The standardized factor loadings of the baseline model are shown in Table 1 for both boys and girls. Due to the high latent correlation of the two aggression constructs (φ = .81 in boys and .85 in girls); an additional model using similar indicators to reflect a single aggression construct was compared with the baseline (two-construct) model (this comparison was conducted for boys and girls combined). The chi-square difference test showed that the single construct model, χ2 (108) = 225.53, p < .001, CFI = .98, TLI = .98, RMSEA = .10 did not fit the data as well as the two-construct model; χ2diff (4) = 38.18, p < .001. Thus, the two constructs were statistically distinguished, though they are highly correlated ( Nelson et al., 2006). Furthermore, for the sake of comparison with earlier work, we computed the equivalent Pearson correlations for the aggression scale scores (rs = .69 and .72 for boys and girls, respectively). These are fairly similar to values reported in prior research regarding physical and relational aggression ( McNeilly-Choque et al., 1996 and Nelson et al., 2005). Despite the relatively high correlation, numerous examples of criterion validity have distinguished relational and physical aggression across a significant number of studies (e.g., Nelson et al., 2006).