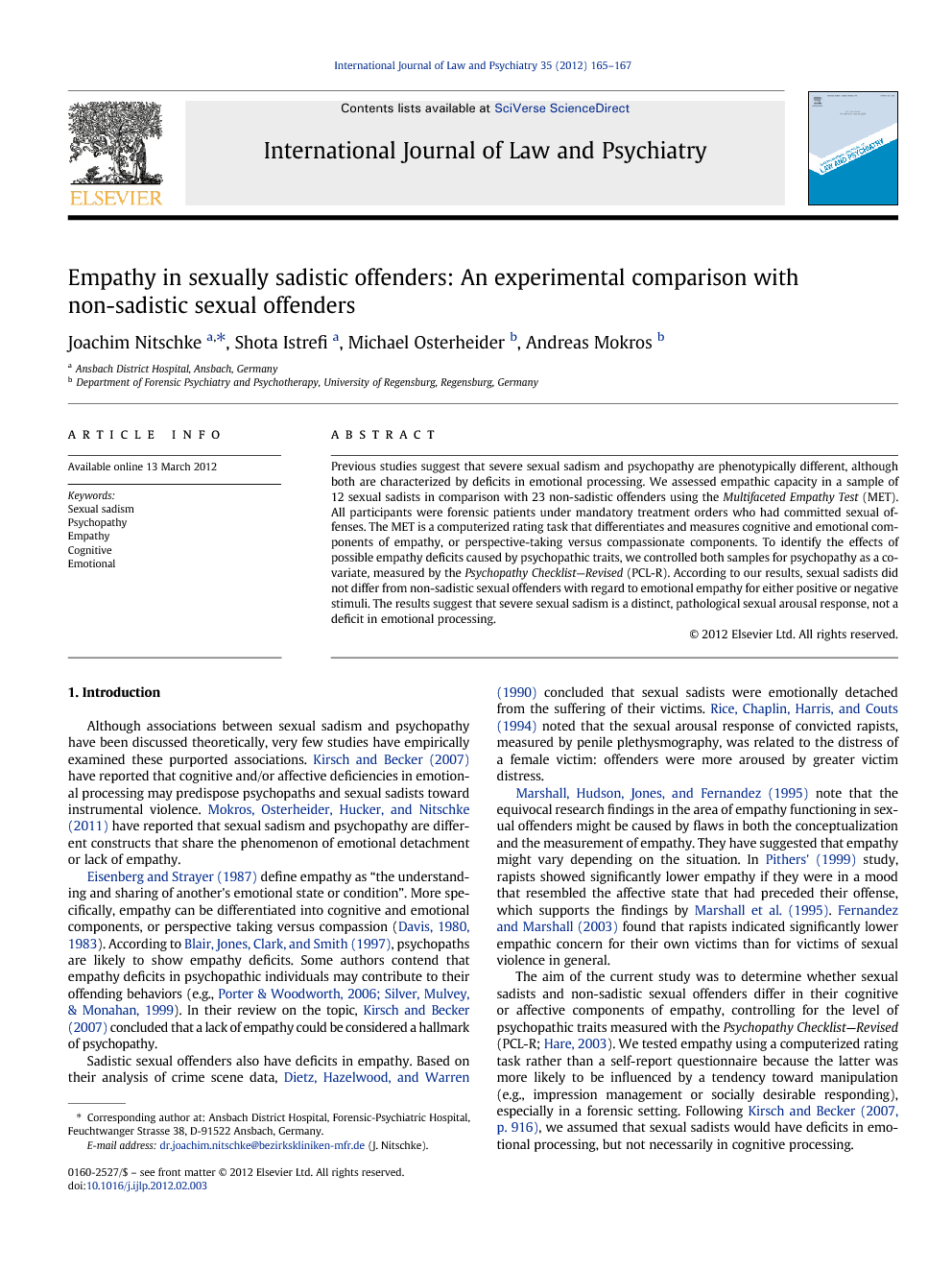 Previous studies suggest that severe sexual sadism and psychopathy are phenotypically different, although both are characterized by deficits in emotional processing. We assessed empathic capacity in a sample of 12 sexual sadists in comparison with 23 non-sadistic offenders using the Multifaceted Empathy Test (MET). All participants were forensic patients under mandatory treatment orders who had committed sexual offenses. The MET is a computerized rating task that differentiates and measures cognitive and emotional components of empathy, or perspective-taking versus compassionate components. To identify the effects of possible empathy deficits caused by psychopathic traits, we controlled both samples for psychopathy as a covariate, measured by the Psychopathy Checklist—Revised (PCL-R). According to our results, sexual sadists did not differ from non-sadistic sexual offenders with regard to emotional empathy for either positive or negative stimuli. The results suggest that severe sexual sadism is a distinct, pathological sexual arousal response, not a deficit in emotional processing.

Although associations between sexual sadism and psychopathy have been discussed theoretically, very few studies have empirically examined these purported associations. Kirsch and Becker (2007) have reported that cognitive and/or affective deficiencies in emotional processing may predispose psychopaths and sexual sadists toward instrumental violence. Mokros, Osterheider, Hucker, and Nitschke (2011) have reported that sexual sadism and psychopathy are different constructs that share the phenomenon of emotional detachment or lack of empathy. Eisenberg and Strayer (1987) define empathy as “the understanding and sharing of another's emotional state or condition”. More specifically, empathy can be differentiated into cognitive and emotional components, or perspective taking versus compassion (Davis, 1980 and Davis, 1983). According to Blair, Jones, Clark, and Smith (1997), psychopaths are likely to show empathy deficits. Some authors contend that empathy deficits in psychopathic individuals may contribute to their offending behaviors (e.g., Porter and Woodworth, 2006 and Silver et al., 1999). In their review on the topic, Kirsch and Becker (2007) concluded that a lack of empathy could be considered a hallmark of psychopathy. Sadistic sexual offenders also have deficits in empathy. Based on their analysis of crime scene data, Dietz, Hazelwood, and Warren (1990) concluded that sexual sadists were emotionally detached from the suffering of their victims. Rice, Chaplin, Harris, and Couts (1994) noted that the sexual arousal response of convicted rapists, measured by penile plethysmography, was related to the distress of a female victim: offenders were more aroused by greater victim distress. Marshall, Hudson, Jones, and Fernandez (1995) note that the equivocal research findings in the area of empathy functioning in sexual offenders might be caused by flaws in both the conceptualization and the measurement of empathy. They have suggested that empathy might vary depending on the situation. In Pithers' (1999) study, rapists showed significantly lower empathy if they were in a mood that resembled the affective state that had preceded their offense, which supports the findings by Marshall et al. (1995). Fernandez and Marshall (2003) found that rapists indicated significantly lower empathic concern for their own victims than for victims of sexual violence in general. The aim of the current study was to determine whether sexual sadists and non-sadistic sexual offenders differ in their cognitive or affective components of empathy, controlling for the level of psychopathic traits measured with the Psychopathy Checklist—Revised (PCL-R; Hare, 2003). We tested empathy using a computerized rating task rather than a self-report questionnaire because the latter was more likely to be influenced by a tendency toward manipulation (e.g., impression management or socially desirable responding), especially in a forensic setting. Following Kirsch and Becker (2007, p. 916), we assumed that sexual sadists would have deficits in emotional processing, but not necessarily in cognitive processing.