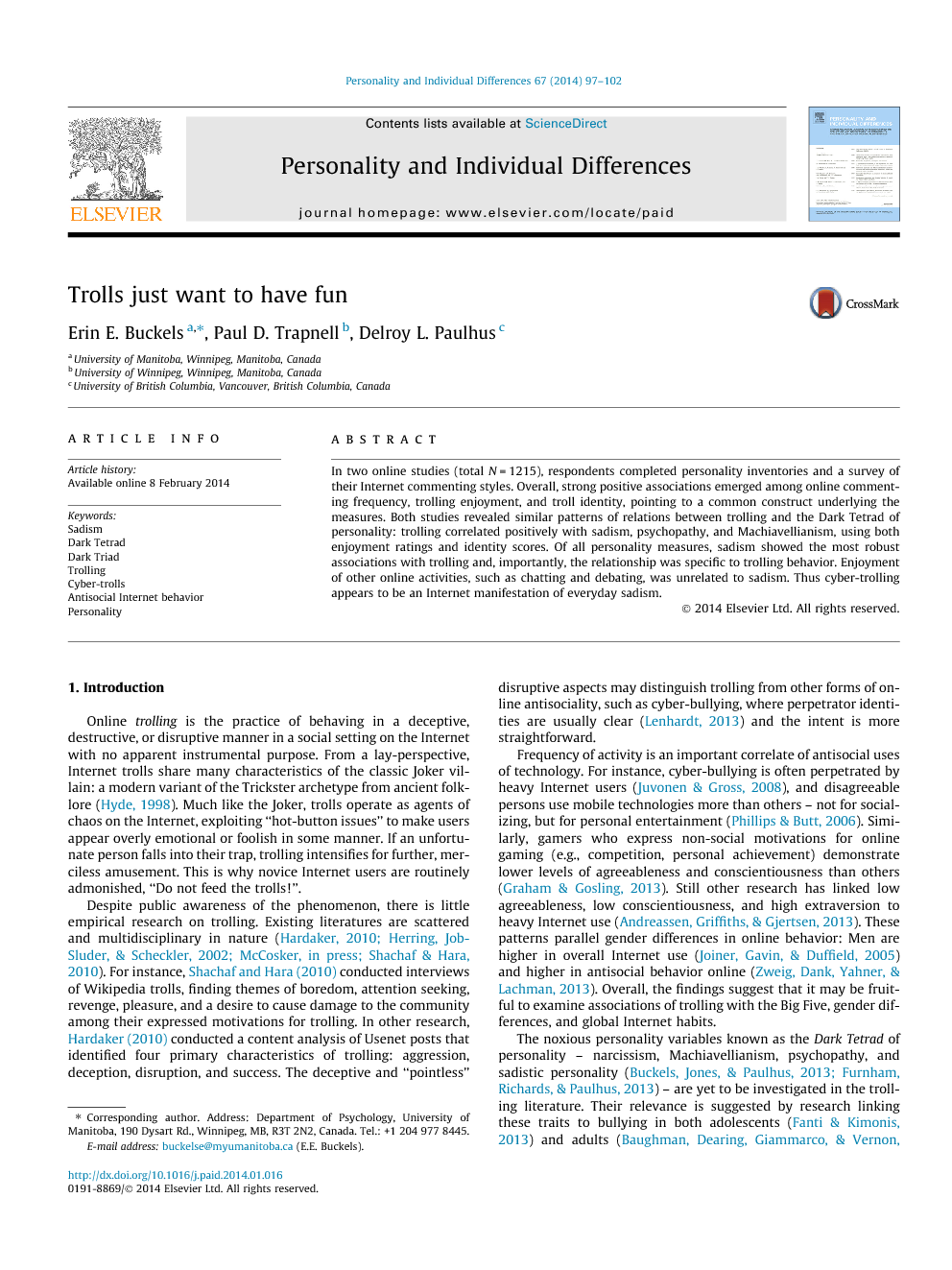 In two online studies (total N = 1215), respondents completed personality inventories and a survey of their Internet commenting styles. Overall, strong positive associations emerged among online commenting frequency, trolling enjoyment, and troll identity, pointing to a common construct underlying the measures. Both studies revealed similar patterns of relations between trolling and the Dark Tetrad of personality: trolling correlated positively with sadism, psychopathy, and Machiavellianism, using both enjoyment ratings and identity scores. Of all personality measures, sadism showed the most robust associations with trolling and, importantly, the relationship was specific to trolling behavior. Enjoyment of other online activities, such as chatting and debating, was unrelated to sadism. Thus cyber-trolling appears to be an Internet manifestation of everyday sadism.

Online trolling is the practice of behaving in a deceptive, destructive, or disruptive manner in a social setting on the Internet with no apparent instrumental purpose. From a lay-perspective, Internet trolls share many characteristics of the classic Joker villain: a modern variant of the Trickster archetype from ancient folklore ( Hyde, 1998). Much like the Joker, trolls operate as agents of chaos on the Internet, exploiting “hot-button issues” to make users appear overly emotional or foolish in some manner. If an unfortunate person falls into their trap, trolling intensifies for further, merciless amusement. This is why novice Internet users are routinely admonished, “Do not feed the trolls!”. Despite public awareness of the phenomenon, there is little empirical research on trolling. Existing literatures are scattered and multidisciplinary in nature (Hardaker, 2010, Herring et al., 2002, McCosker, 2014 and Shachaf and Hara, 2010). For instance, Shachaf and Hara (2010) conducted interviews of Wikipedia trolls, finding themes of boredom, attention seeking, revenge, pleasure, and a desire to cause damage to the community among their expressed motivations for trolling. In other research, Hardaker (2010) conducted a content analysis of Usenet posts that identified four primary characteristics of trolling: aggression, deception, disruption, and success. The deceptive and “pointless” disruptive aspects may distinguish trolling from other forms of online antisociality, such as cyber-bullying, where perpetrator identities are usually clear (Lenhardt, 2013) and the intent is more straightforward. Frequency of activity is an important correlate of antisocial uses of technology. For instance, cyber-bullying is often perpetrated by heavy Internet users (Juvonen & Gross, 2008), and disagreeable persons use mobile technologies more than others – not for socializing, but for personal entertainment (Phillips & Butt, 2006). Similarly, gamers who express non-social motivations for online gaming (e.g., competition, personal achievement) demonstrate lower levels of agreeableness and conscientiousness than others (Graham & Gosling, 2013). Still other research has linked low agreeableness, low conscientiousness, and high extraversion to heavy Internet use (Andreassen, Griffiths, & Gjertsen, 2013). These patterns parallel gender differences in online behavior: Men are higher in overall Internet use (Joiner, Gavin, & Duffield, 2005) and higher in antisocial behavior online (Zweig, Dank, Yahner, & Lachman, 2013). Overall, the findings suggest that it may be fruitful to examine associations of trolling with the Big Five, gender differences, and global Internet habits. The noxious personality variables known as the Dark Tetrad of personality – narcissism, Machiavellianism, psychopathy, and sadistic personality ( Buckels et al., 2013 and Furnham et al., 2013) – are yet to be investigated in the trolling literature. Their relevance is suggested by research linking these traits to bullying in both adolescents ( Fanti & Kimonis, 2013) and adults ( Baughman et al., 2012, Jones and Paulhus, 2010 and Linton and Power, 2013). Also suggestive is research showing that narcissists ( Ljepava, Orr, Locke, & Ross, 2013) and those with antisocial personality disorder ( Rosen, Whaling, Rab, Carrier, & Cheever, 2013) use Facebook more frequently than others, thus indicating that dark personalities leave large digital footprints. Of the Dark Tetrad, we expected everyday sadism ( Buckels et al., 2013) to prove most germane to trolling. After all, trolling culture embraces a concept virtually synonymous with sadistic pleasure: in troll-speak, “lulz.” To evaluate the predictors of Internet trolling, we administered questionnaires to student and community samples in two online studies. In Study 1, we focused on predicting enjoyment of trolling, as opposed to other online social activities, such as debating and chatting. We expected that the Dark Tetrad would be positively associated with a tendency to rate trolling as the most favored activity on “troll-able” websites (defined here as websites that permit users to interact by posting comments). We further expected that extraversion and agreeableness – the Big Five dimensions most relevant to the Dark Tetrad’s social world (Paulhus & Williams, 2002) – would evidence associations with trolling, with a preference for trolling indicative of extraverted but disagreeable personality traits.