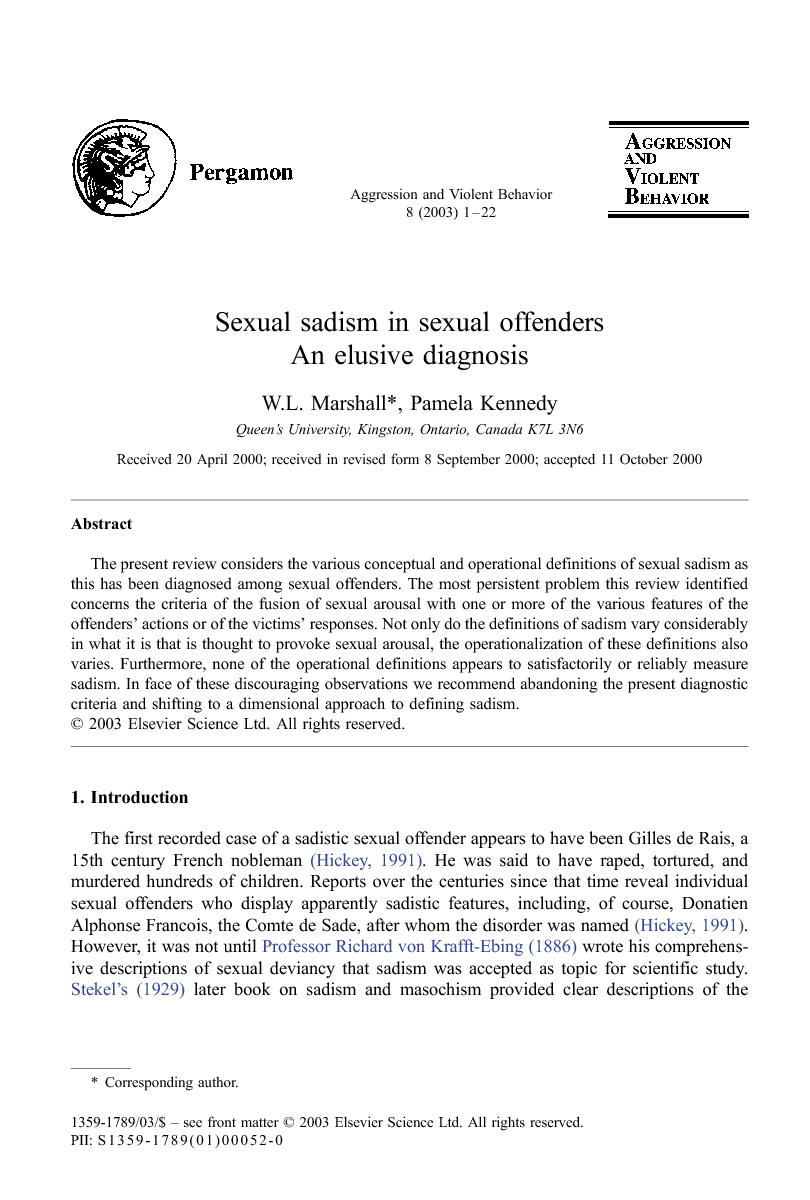 The present review considers the various conceptual and operational definitions of sexual sadism as this has been diagnosed among sexual offenders. The most persistent problem this review identified concerns the criteria of the fusion of sexual arousal with one or more of the various features of the offenders' actions or of the victims' responses. Not only do the definitions of sadism vary considerably in what it is that is thought to provoke sexual arousal, the operationalization of these definitions also varies. Furthermore, none of the operational definitions appears to satisfactorily or reliably measure sadism. In face of these discouraging observations we recommend abandoning the present diagnostic criteria and shifting to a dimensional approach to defining sadism.

The first recorded case of a sadistic sexual offender appears to have been Gilles de Rais, a 15th century French nobleman (Hickey, 1991). He was said to have raped, tortured, and murdered hundreds of children. Reports over the centuries since that time reveal individual sexual offenders who display apparently sadistic features, including, of course, Donatien Alphonse Francois, the Comte de Sade, after whom the disorder was named (Hickey, 1991). However, it was not until Professor Richard von Krafft-Ebing (1886) wrote his comprehensive descriptions of sexual deviancy that sadism was accepted as topic for scientific study. Stekel's (1929) later book on sadism and masochism provided clear descriptions of the features of these two related disorders and this finally led to the popularization of the use of these terms in clinical practice. While there clearly are sadists who do not sexually offend, Breslow, 1989, Spengler, 1977 and Weinberg, 1987, and who are of scientific and clinical interest in their own right, it is only those sadists who commit sexual crimes that are the focus of this paper. There is now a very extensive literature on sadistic sexual offenders including numerous case reports Arieti & Schreiber, 1981, Guttmacher, 1963, Kozel et al., 1966, Rae, 1967, Schechter, 1990 and Schlesinger, 1990 as well as reviews and research studies Brittain, 1970, Grubin, 1994a, Hickey, 1991, Holmes & DeBurger, 1988, Ressler et al., 1988, Revitch, 1957 and Warren et al., 1996. Much of this literature also deals with sexual murderers, not all of whom are necessarily sadists (Grubin, 1994a), and serial murderers, not all of whom are sexual murderers (Ressler et al., 1988). Many studies, unfortunately, do not satisfactorily discriminate among these possibly different types of offenders, and some authors assume that serial killers are in fact serial sexual murderers (Myers, Reccoppa, Burton, & McElroy, 1993), while others conclude that serial sexual murderers are sadists (Giannangelo, 1996). This confused use of various terms makes it difficult to review this extensive literature and at times in this paper we will be obliged to drew inferences from studies that have not made these distinctions as clearly as we would like. What we will attempt to do is first consider conceptual definitional issues, including diagnostic criteria, and then examine the operational bases on which the diagnosis of sexual sadism is made. Finally, we will draw implications for research and practice that we believe derive from our consideration of the literature.

n conclusion then, after more than 100 years of research and clinical observations we seem no closer to a satisfactory, agreed upon, and reliable diagnosis of sadism than was true when Krafft-Ebing (1886) first described a series of cases he called sadistic. Our review of the evidence does not encourage confidence that things will improve in the future, so we recommend abandoning the diagnosis. Instead, we suggest that researchers rely on behavioral data to identify their subjects along various dimensions of brutality. These dimensions should include the degree of aggression or force, the enactment of degrading or humiliating behaviors (acts as well as speech), and the magnitude of the victim's injury. Research on sexual murderers (serials, singles, or mass murderers) has, as we have noted earlier, been reasonably fruitful Firestone et al., 1998, Grubin, 1994a, Langevin et al., 1988, Myers et al., 1999, Palermo, 1997 and Warren et al., 1996. This research may prove to be even more valuable if issues concerning sadism are excluded. The same could be done for violent sexual offenders who do not kill their victims. We suggest that clinicians state sexual offending issues in terms of behaviors rather than attempting to infer an elusive synergism between sexual arousal and various acts or consequences. When a sexual offender admits to being sexually aroused by brutality or degradation, or confesses to having sexually arousing fantasies involving brutality and degradation, then this, of course, should be noted. Such fantasies or arousal to brutality may very well contribute to an estimate of risk to reoffend, although we doubt it would add anything meaningful to already knowing the behavioral data. Deviant sexual fantasies or deviant sexual arousal, when these are admitted or observed in phallometric assessments, provide targets for treatment whether of not these have sadistic elements. Behavioral treatments (Laws & Marshall, 1991), or antiandrogen medications (Bradford, 1990), may be useful in modifying such sexual interests, but noting that they are sadistic does not imply alternative treatment methods.