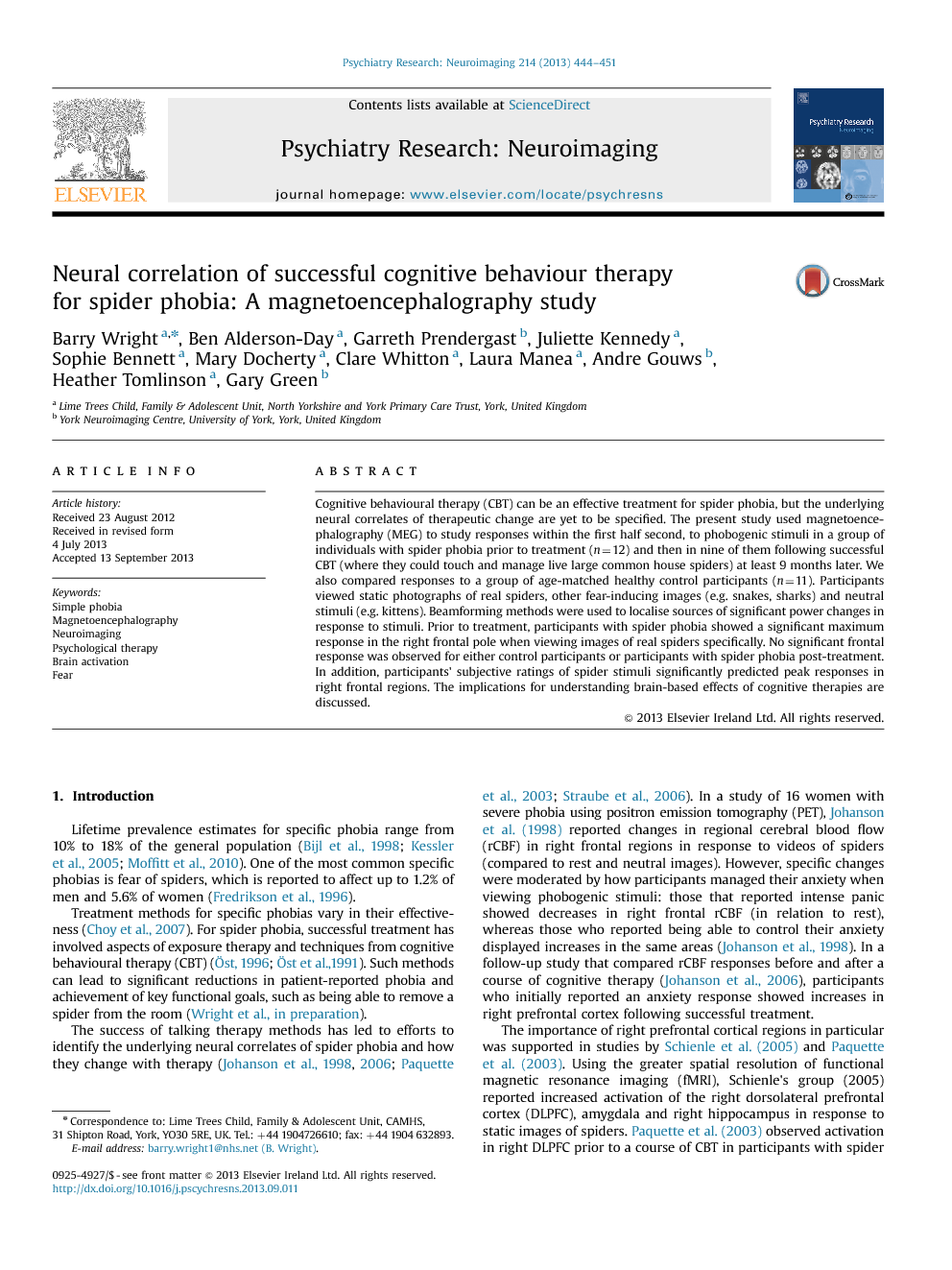 Cognitive behavioural therapy (CBT) can be an effective treatment for spider phobia, but the underlying neural correlates of therapeutic change are yet to be specified. The present study used magnetoencephalography (MEG) to study responses within the first half second, to phobogenic stimuli in a group of individuals with spider phobia prior to treatment (n=12) and then in nine of them following successful CBT (where they could touch and manage live large common house spiders) at least 9 months later. We also compared responses to a group of age-matched healthy control participants (n=11). Participants viewed static photographs of real spiders, other fear-inducing images (e.g. snakes, sharks) and neutral stimuli (e.g. kittens). Beamforming methods were used to localise sources of significant power changes in response to stimuli. Prior to treatment, participants with spider phobia showed a significant maximum response in the right frontal pole when viewing images of real spiders specifically. No significant frontal response was observed for either control participants or participants with spider phobia post-treatment. In addition, participants' subjective ratings of spider stimuli significantly predicted peak responses in right frontal regions. The implications for understanding brain-based effects of cognitive therapies are discussed.

Lifetime prevalence estimates for specific phobia range from 10% to 18% of the general population (Bijl et al., 1998, Kessler et al., 2005 and Moffitt et al., 2010). One of the most common specific phobias is fear of spiders, which is reported to affect up to 1.2% of men and 5.6% of women (Fredrikson et al., 1996). Treatment methods for specific phobias vary in their effectiveness (Choy et al., 2007). For spider phobia, successful treatment has involved aspects of exposure therapy and techniques from cognitive behavioural therapy (CBT) (Öst, 1996 and Öst et al., 1991). Such methods can lead to significant reductions in patient-reported phobia and achievement of key functional goals, such as being able to remove a spider from the room (Wright et al., in preparation). The success of talking therapy methods has led to efforts to identify the underlying neural correlates of spider phobia and how they change with therapy (Johanson et al., 1998, Johanson et al., 2006, Paquette et al., 2003 and Straube et al., 2006). In a study of 16 women with severe phobia using positron emission tomography (PET), Johanson et al. (1998) reported changes in regional cerebral blood flow (rCBF) in right frontal regions in response to videos of spiders (compared to rest and neutral images). However, specific changes were moderated by how participants managed their anxiety when viewing phobogenic stimuli: those that reported intense panic showed decreases in right frontal rCBF (in relation to rest), whereas those who reported being able to control their anxiety displayed increases in the same areas (Johanson et al., 1998). In a follow-up study that compared rCBF responses before and after a course of cognitive therapy (Johanson et al., 2006), participants who initially reported an anxiety response showed increases in right prefrontal cortex following successful treatment. The importance of right prefrontal cortical regions in particular was supported in studies by Schienle et al. (2005) and Paquette et al. (2003). Using the greater spatial resolution of functional magnetic resonance imaging (fMRI), Schienle's group (2005) reported increased activation of the right dorsolateral prefrontal cortex (DLPFC), amygdala and right hippocampus in response to static images of spiders. Paquette et al. (2003) observed activation in right DLPFC prior to a course of CBT in participants with spider phobia, but no such response following treatment. Changes following similar therapeutic interventions have also been observed in the anterior cingulate cortex and insula (Straube et al., 2006) and amygdala, fusiform gyrus and medial orbitofrontal cortex (OFC) (Schienle et al., 2007). In the longer term, reductions in phobia following treatment have been associated with increases in medial OFC, which have been interpreted as reflecting improvement in emotional self-regulation (Schienle et al., 2009). While the above MRI studies have identified the main brain areas associated with improvements following treatment, they lack the temporal resolution required to examine the time course of the phobic response. This is significant, as responses to phobogenic stimuli can be rapid (Globisch et al., 1999 and Carlsson et al., 2004). Increased potentiation of the startle reflex has been reported to occur as early as 300 ms post-stimulus in participants viewing phobia-specific images (Globisch et al., 1999), an effect that can be induced with presentation times as short as 150 ms. Using a masking paradigm, Carlsson et al. (2004) reported phobia-specific PET responses in the amygdala and surrounding areas even when phobogenic target stimuli were only presented for 14 ms. Phobic participants are faster than controls in identifying spiders and show increased P300 and P400 responses to spider stimuli (Kolassa et al., 2005), with P300 increases also seen in spider phobia EEG studies (Leutgeb et al., 2009 and Scharmüller et al., 2011). In addition, the onset of the BOLD response in the amygdala to spider images has also been reported to be earlier in phobic participants (Larson et al., 2006). Because of this, it is important to complement existing findings on therapeutic change in the phobic response with data using electrophysiological methods, which have high temporal resolution. Electroencephalography (EEG) and magnetoencephalography (MEG), in contrast to MRI, allow for examination of the early (i.e. under one second) phobic response. Commonly this greater temporal resolution is associated with a loss of spatial resolution: most electroencephalographic methods of analysis are constrained to reporting changes in sensor-space. However, when combined with spatial filtering techniques such as Beamforming, MEG in particular allows for the reconstruction of multiple sources of activity inside the skull, at a greater spatial resolution than standard electrophysiological methods of analysis. This makes it an ideal tool for examining changes in the phobic responses with therapy. The present study is the first (to our knowledge) to use MEG to examine changes to the early phobic response to spider stimuli. This was done first by comparing MEG responses in a group of participants with spider phobia and a group of age-matched, healthy controls, viewing images of spiders, other fear-inducing but non-phobogenic stimuli (e.g. snakes, sharks) and neutral stimuli. To then examine therapy-related changes, spider phobic participants completed a 6-month course of CBT, and were scanned in a second session. Following previous findings, we hypothesised that changes to the phobic responses would be observable in the right prefrontal cortex in particular.

Despite these limitations, it is notable that the main finding presented here converges with previous findings from PET/MRI research, notwithstanding their methodological differences. Future studies could utilise an fMRI localiser in concert with either MEG or EEG to clarify the relationship between very early phobic responses and later activation of more extensive fear networks, preferably in dynamic as well as static phobogenic stimuli. Other research groups such as those in Stockholm (Öst, 1996) and Graz (Schienle et al., 2009) have often used 1–5 sessions in neuroimaging research but can sometimes have high drop out rates. For example in one study of 103 participants, 38 participants (37%) dropped out and 59 (57%) of those recruited improved (Öst et al., 1998). We were not seeking to test the clinical therapy. We were wanting to rescan people in whom there had been very significant clinical benefit. We therefore took people to the point where they felt they could improve no further, and this averaged 14 sessions with 100% of those completing treatment having clinically excellent results (this figure drops to 75% when those who withdrew from treatment are included). These high rates enabled us to test a post-treatment group in whom there were clear and strong clinical benefits. In conclusion, the behavioural benefits of cognitive therapy for spider phobia appear to be matched by changes in early neural responses in the right frontal cortex. Adding to the findings of previous research, these data suggest that such changes are evident as early as 250 ms in response to spiders, implicating an adaptation in the automatic phobic response following therapy.