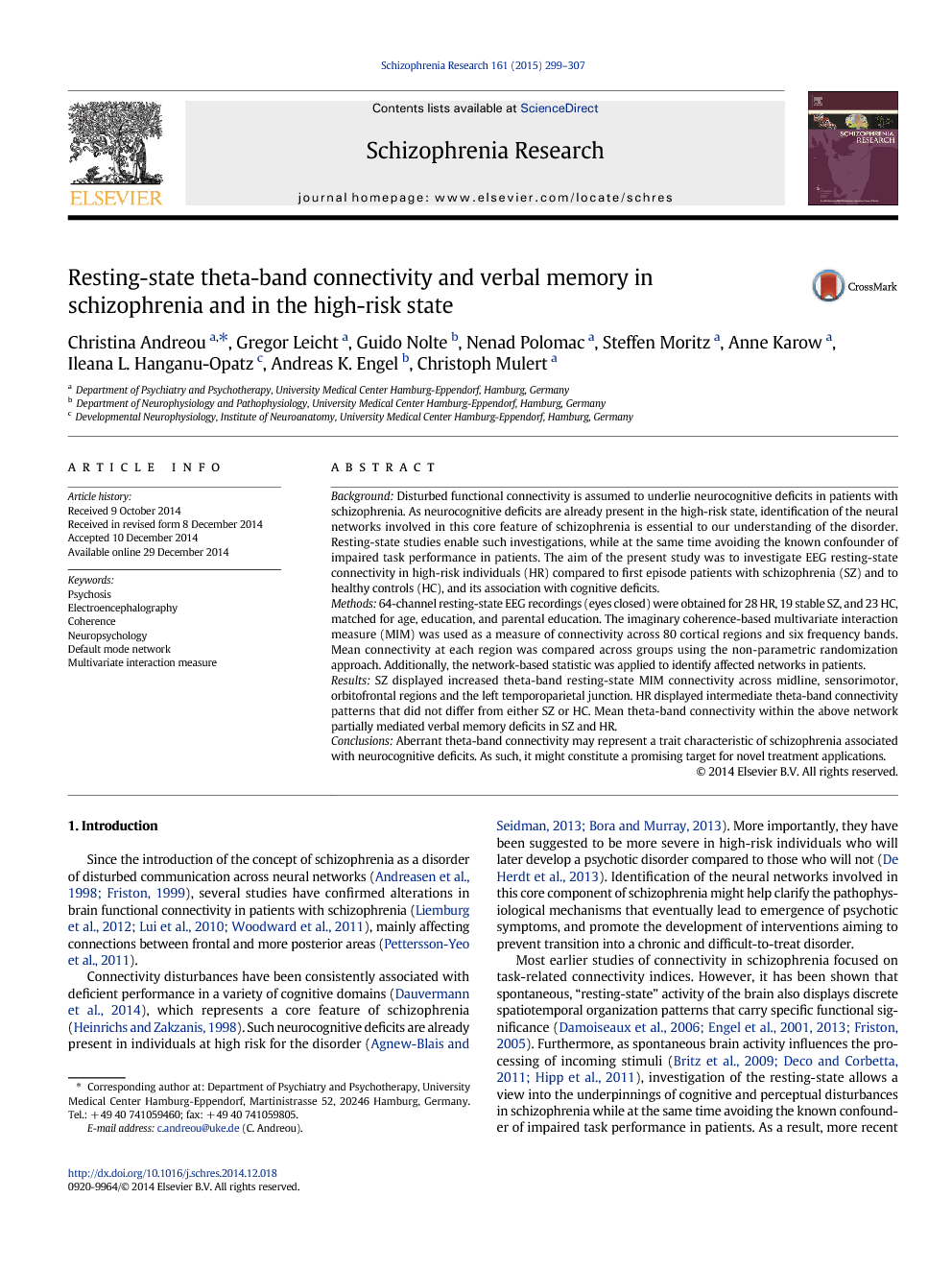 Disturbed functional connectivity is assumed to underlie neurocognitive deficits in patients with schizophrenia. As neurocognitive deficits are already present in the high-risk state, identification of the neural networks involved in this core feature of schizophrenia is essential to our understanding of the disorder. Resting-state studies enable such investigations, while at the same time avoiding the known confounder of impaired task performance in patients. The aim of the present study was to investigate EEG resting-state connectivity in high-risk individuals (HR) compared to first episode patients with schizophrenia (SZ) and to healthy controls (HC), and its association with cognitive deficits. Methods 64-channel resting-state EEG recordings (eyes closed) were obtained for 28 HR, 19 stable SZ, and 23 HC, matched for age, education, and parental education. The imaginary coherence-based multivariate interaction measure (MIM) was used as a measure of connectivity across 80 cortical regions and six frequency bands. Mean connectivity at each region was compared across groups using the non-parametric randomization approach. Additionally, the network-based statistic was applied to identify affected networks in patients. Results SZ displayed increased theta-band resting-state MIM connectivity across midline, sensorimotor, orbitofrontal regions and the left temporoparietal junction. HR displayed intermediate theta-band connectivity patterns that did not differ from either SZ or HC. Mean theta-band connectivity within the above network partially mediated verbal memory deficits in SZ and HR. Conclusions Aberrant theta-band connectivity may represent a trait characteristic of schizophrenia associated with neurocognitive deficits. As such, it might constitute a promising target for novel treatment applications.

Since the introduction of the concept of schizophrenia as a disorder of disturbed communication across neural networks (Andreasen et al., 1998 and Friston, 1999), several studies have confirmed alterations in brain functional connectivity in patients with schizophrenia (Liemburg et al., 2012, Lui et al., 2010 and Woodward et al., 2011), mainly affecting connections between frontal and more posterior areas (Pettersson-Yeo et al., 2011). Connectivity disturbances have been consistently associated with deficient performance in a variety of cognitive domains (Dauvermann et al., 2014), which represents a core feature of schizophrenia (Heinrichs and Zakzanis, 1998). Such neurocognitive deficits are already present in individuals at high risk for the disorder (Agnew-Blais and Seidman, 2013 and Bora and Murray, 2014). More importantly, they have been suggested to be more severe in high-risk individuals who will later develop a psychotic disorder compared to those who will not (De Herdt et al., 2013). Identification of the neural networks involved in this core component of schizophrenia might help clarify the pathophysiological mechanisms that eventually lead to emergence of psychotic symptoms, and promote the development of interventions aiming to prevent transition into a chronic and difficult-to-treat disorder. Most earlier studies of connectivity in schizophrenia focused on task-related connectivity indices. However, it has been shown that spontaneous, “resting-state” activity of the brain also displays discrete spatiotemporal organization patterns that carry specific functional significance (Damoiseaux et al., 2006, Engel et al., 2001, Engel et al., 2013 and Friston, 2005). Furthermore, as spontaneous brain activity influences the processing of incoming stimuli (Britz et al., 2009, Deco and Corbetta, 2011 and Hipp et al., 2011), investigation of the resting-state allows a view into the underpinnings of cognitive and perceptual disturbances in schizophrenia while at the same time avoiding the known confounder of impaired task performance in patients. As a result, more recent studies on connectivity in schizophrenia and in the high-risk state have increasingly focused on the interactions within and between resting-state brain networks. Overall, the findings of these studies indicate complex dysconnectivity patterns in patients and high-risk individuals, where interactions of a brain area with others might be reduced or increased depending on the network studied (Allen et al., 2010, Guo et al., 2014, Liemburg et al., 2012, Lord et al., 2011, Manoliu et al., 2014 and Shim et al., 2010). All of the aforementioned studies of resting-state connectivity have employed functional magnetic resonance imaging (fMRI). A shortcoming of fMRI-based measures is that, due to their low time resolution, they cannot capture the fast dynamics of neuronal interactions, which occur on a millisecond time-scale (Uhlhaas, 2013). These dynamics involve neuronal oscillations across a broad frequency range, which appear to correspond in a frequency-specific manner to different spatial network configurations (Hillebrand et al., 2012, Hipp et al., 2012 and Marzetti et al., 2013) and different aspects of stimulus processing (Leicht et al., 2013 and Marco-Pallares et al., 2008). MEG and EEG provide the opportunity to study the spectral structure of neuronal activity with excellent temporal resolution and thus to characterize brain network properties in considerably greater detail compared to fMRI. Indeed, emerging evidence suggests that certain EEG connectivity measures, notably those based on phase correlations among signals, might reveal coupling patterns that are not captured by fMRI (Engel et al., 2013). Several studies have reported various EEG/MEG scalp-level connectivity abnormalities in schizophrenia, with results indicating reduced phase synchronization in the beta and gamma frequency range (Kam et al., 2013, Kikuchi et al., 2011 and Uhlhaas and Singer, 2010), but increased connectivity in lower frequency bands (Kam et al., 2013), in patients compared to healthy controls. However, scalp-level analyses are limited in their usefulness for drawing inferences regarding the underlying sources of electrical activity in the brain, due to known methodological problems associated with reference electrode placement and volume conduction. So far, few studies have assessed EEG/MEG connectivity at the source level in schizophrenia. In the gamma-band range, reduced task-related (Mulert et al., 2004), but intact resting-state connectivity has been reported (Rutter et al., 2013). In the lower frequencies, one study (Hinkley et al., 2011) reported a complex pattern that included region-specific increases and decreases of alpha-band connectivity in patients, whereas another study (Lehmann et al., 2014) observed decreased connectivity in the alpha-band, and increased connectivity in the delta/theta band, in patients. Clearly, more work is needed until these results can be integrated into a coherent account of connectivity disturbances in schizophrenia. Critically, so far there is very little information on the networks affected at different frequency ranges, and whether abnormalities are present before illness onset. The aim of the present study was to evaluate EEG resting-state source-level connectivity across a wide range of frequencies in high-risk individuals compared to first-episode patients with schizophrenia and healthy controls. A second aim was to investigate to what extent resting-state connectivity disturbances contribute to the cognitive deficits that characterize schizophrenia and the high-risk state. An important consideration when investigating EEG/MEG connectivity is that measures of brain interaction may be distorted by signal mixing due to volume conduction and, for EEG, to the use of a common reference (Hipp et al., 2012, Nolte et al., 2004 and Stam et al., 2007). Therefore, for the present study we used a multivariate interaction measure that maximizes both invariance with respect to volume spread and the detection of true neuronal interactions (Ewald et al., 2012).

The three groups did not differ in age, education or parental education. Because of differences in gender ratio (there were more female participants in the HR than in the SZ group, see Table 1), gender was initially included in all analyses reported below. However, as this variable did not have any significant main effects or interactions with group in any of the analyses, it was dropped and results are reported without its inclusion. The number of artifact-free epochs did not significantly differ between groups [HC: 212.6 ± 52.3; SZ: 212.7 ± 52.3; HR: 223.0 ± 60.1, F(2,67) = 0.286 p = .75]. The main effect of group on scalp oscillatory power was not significant [F(2,67) = 0.690, p = 0.54]. The group × frequency band interaction also missed significance in the overall ANOVA [F(10,149.001) = 1.608, p = 0.17] (Fig. S1); however, there was a trend for patients with schizophrenia to display increased theta scalp oscillatory power compared to healthy controls (Bonferroni-corrected p = 0.10).