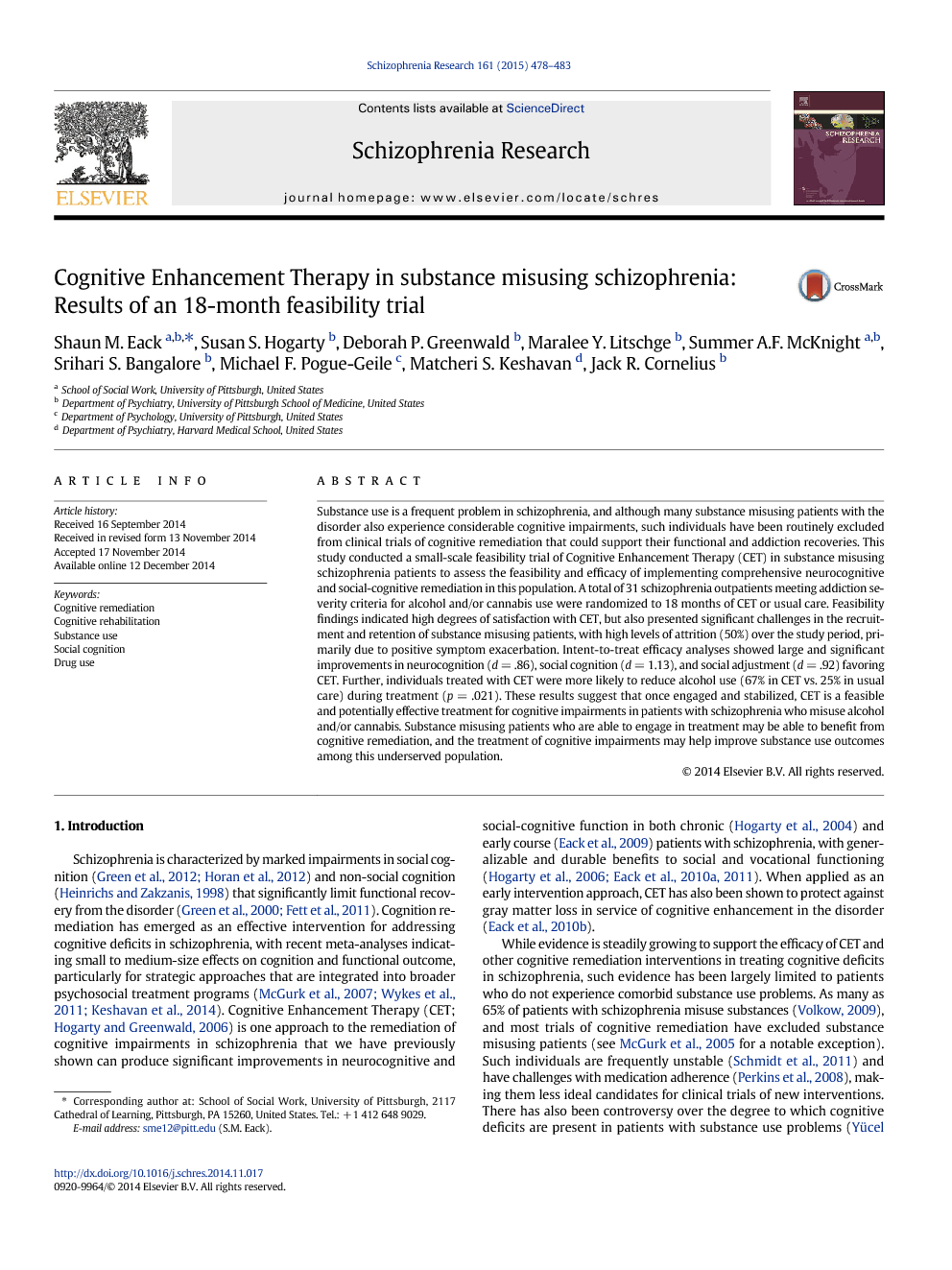 Substance use is a frequent problem in schizophrenia, and although many substance misusing patients with the disorder also experience considerable cognitive impairments, such individuals have been routinely excluded from clinical trials of cognitive remediation that could support their functional and addiction recoveries. This study conducted a small-scale feasibility trial of Cognitive Enhancement Therapy (CET) in substance misusing schizophrenia patients to assess the feasibility and efficacy of implementing comprehensive neurocognitive and social-cognitive remediation in this population. A total of 31 schizophrenia outpatients meeting addiction severity criteria for alcohol and/or cannabis use were randomized to 18 months of CET or usual care. Feasibility findings indicated high degrees of satisfaction with CET, but also presented significant challenges in the recruitment and retention of substance misusing patients, with high levels of attrition (50%) over the study period, primarily due to positive symptom exacerbation. Intent-to-treat efficacy analyses showed large and significant improvements in neurocognition (d = .86), social cognition (d = 1.13), and social adjustment (d = .92) favoring CET. Further, individuals treated with CET were more likely to reduce alcohol use (67% in CET vs. 25% in usual care) during treatment (p = .021). These results suggest that once engaged and stabilized, CET is a feasible and potentially effective treatment for cognitive impairments in patients with schizophrenia who misuse alcohol and/or cannabis. Substance misusing patients who are able to engage in treatment may be able to benefit from cognitive remediation, and the treatment of cognitive impairments may help improve substance use outcomes among this underserved population.

Schizophrenia is characterized by marked impairments in social cognition (Green et al., 2012 and Horan et al., 2012) and non-social cognition (Heinrichs and Zakzanis, 1998) that significantly limit functional recovery from the disorder (Green et al., 2000 and Fett et al., 2011). Cognition remediation has emerged as an effective intervention for addressing cognitive deficits in schizophrenia, with recent meta-analyses indicating small to medium-size effects on cognition and functional outcome, particularly for strategic approaches that are integrated into broader psychosocial treatment programs (McGurk et al., 2007, Wykes et al., 2011 and Keshavan et al., 2014). Cognitive Enhancement Therapy (CET; Hogarty and Greenwald, 2006) is one approach to the remediation of cognitive impairments in schizophrenia that we have previously shown can produce significant improvements in neurocognitive and social-cognitive function in both chronic (Hogarty et al., 2004) and early course (Eack et al., 2009) patients with schizophrenia, with generalizable and durable benefits to social and vocational functioning (Hogarty et al., 2006, Eack et al., 2010a and Eack et al., 2011). When applied as an early intervention approach, CET has also been shown to protect against gray matter loss in service of cognitive enhancement in the disorder (Eack et al., 2010b). While evidence is steadily growing to support the efficacy of CET and other cognitive remediation interventions in treating cognitive deficits in schizophrenia, such evidence has been largely limited to patients who do not experience comorbid substance use problems. As many as 65% of patients with schizophrenia misuse substances (Volkow, 2009), and most trials of cognitive remediation have excluded substance misusing patients (see McGurk et al., 2005 for a notable exception). Such individuals are frequently unstable (Schmidt et al., 2011) and have challenges with medication adherence (Perkins et al., 2008), making them less ideal candidates for clinical trials of new interventions. There has also been controversy over the degree to which cognitive deficits are present in patients with substance use problems (Yücel et al., 2012), although larger studies using carefully assessed samples indicate impairments similar to those individuals not misusing substances (Wobrock et al., 2013 and Bahorik et al., 2014). Given the general lack of efficacy of antipsychotic treatment on cognitive impairment in schizophrenia (Keefe et al., 2007), some patients may turn to substances to cope with residual cognitive deficits and associated social dysfunction (Blanchard et al., 2000 and Gregg et al., 2007). At the same time, executive and problem-solving impairments may limit the decision-making abilities needed to prevent or recover from substance misuse problems in the disorder (Chambers et al., 2001). If substance misusing schizophrenia patients can be successfully engaged in cognitive remediation interventions that are sensitive to addiction problems, this may help support the recovery of these individuals. Unfortunately, little is known about cognitive remediation in this population. This study sought to examine the feasibility of applying an adapted version of CET to patients with schizophrenia and comorbid alcohol and/or cannabis misuse problems, the two most commonly misused substances in the disorder (Volkow, 2009), and evaluate its initial efficacy compared to usual care in a small-scale randomized-controlled trial.

This study was designed by Drs. Eack, Cornelius, Pogue-Geile, and Bangalore. Dr. Eack wrote the initial draft of the manuscript, Drs. Cornelius, Pogue-Geile, Newhill, Bangalore, Keshavan, and Greenwald, along with Mrs. Hogarty, Ms. McKnight, and Ms. Litschge provided critical revisions and feedback on the manuscript. Ms. McKnight led cognitive data collection supervised by Dr. Greenwald. Dr. Eack oversaw all data collection and analysis aspects of the study. All authors contributed to and have approved the final manuscript.