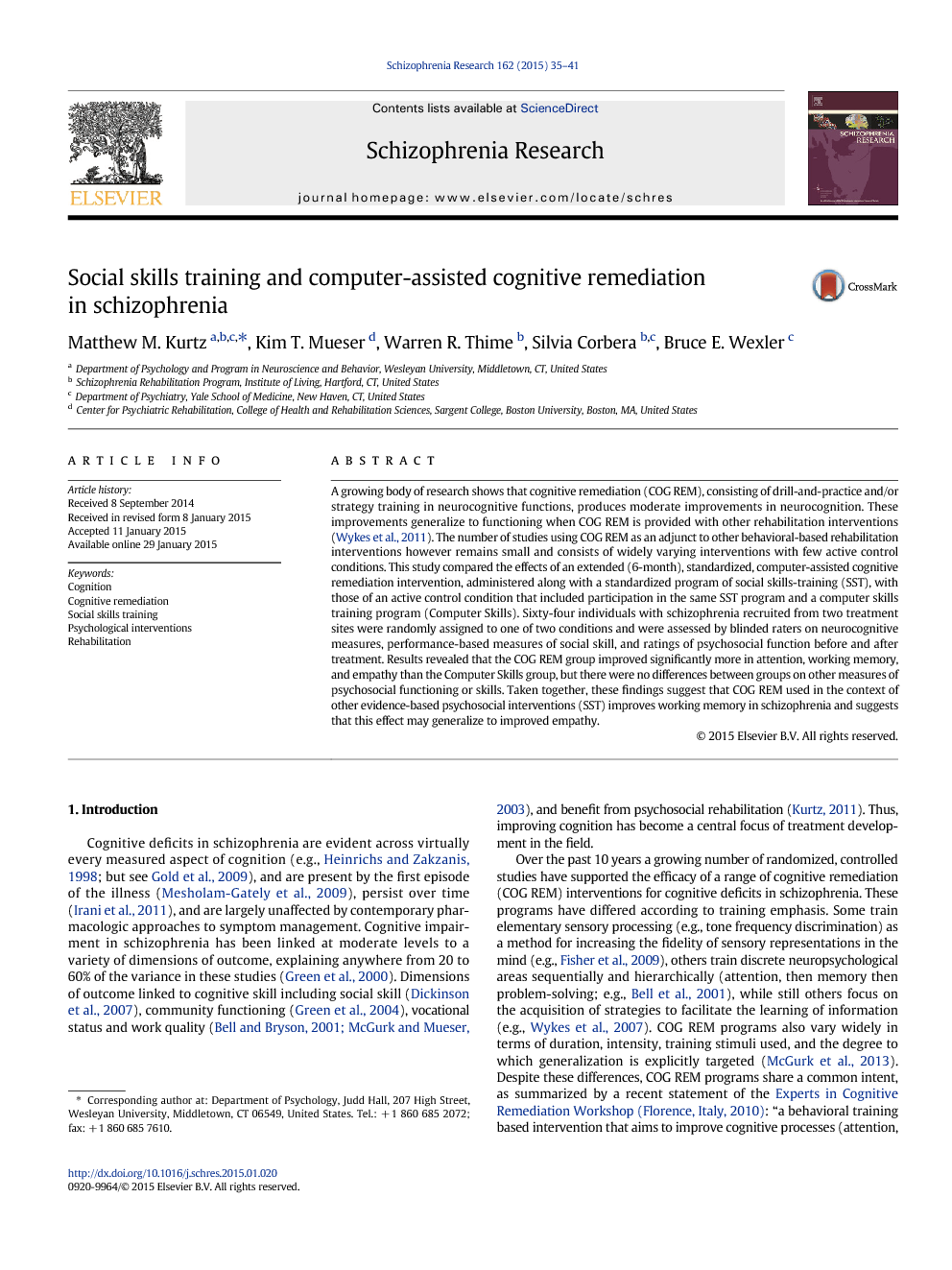 A growing body of research shows that cognitive remediation (COG REM), consisting of drill-and-practice and/or strategy training in neurocognitive functions, produces moderate improvements in neurocognition. These improvements generalize to functioning when COG REM is provided with other rehabilitation interventions (Wykes et al., 2011). The number of studies using COG REM as an adjunct to other behavioral-based rehabilitation interventions however remains small and consists of widely varying interventions with few active control conditions. This study compared the effects of an extended (6-month), standardized, computer-assisted cognitive remediation intervention, administered along with a standardized program of social skills-training (SST), with those of an active control condition that included participation in the same SST program and a computer skills training program (Computer Skills). Sixty-four individuals with schizophrenia recruited from two treatment sites were randomly assigned to one of two conditions and were assessed by blinded raters on neurocognitive measures, performance-based measures of social skill, and ratings of psychosocial function before and after treatment. Results revealed that the COG REM group improved significantly more in attention, working memory, and empathy than the Computer Skills group, but there were no differences between groups on other measures of psychosocial functioning or skills. Taken together, these findings suggest that COG REM used in the context of other evidence-based psychosocial interventions (SST) improves working memory in schizophrenia and suggests that this effect may generalize to improved empathy.

Cognitive deficits in schizophrenia are evident across virtually every measured aspect of cognition (e.g., Heinrichs and Zakzanis, 1998; but see Gold et al., 2009), and are present by the first episode of the illness (Mesholam-Gately et al., 2009), persist over time (Irani et al., 2011), and are largely unaffected by contemporary pharmacologic approaches to symptom management. Cognitive impairment in schizophrenia has been linked at moderate levels to a variety of dimensions of outcome, explaining anywhere from 20 to 60% of the variance in these studies (Green et al., 2000). Dimensions of outcome linked to cognitive skill including social skill (Dickinson et al., 2007), community functioning (Green et al., 2004), vocational status and work quality (Bell and Bryson, 2001 and McGurk and Mueser, 2003), and benefit from psychosocial rehabilitation (Kurtz, 2011). Thus, improving cognition has become a central focus of treatment development in the field. Over the past 10 years a growing number of randomized, controlled studies have supported the efficacy of a range of cognitive remediation (COG REM) interventions for cognitive deficits in schizophrenia. These programs have differed according to training emphasis. Some train elementary sensory processing (e.g., tone frequency discrimination) as a method for increasing the fidelity of sensory representations in the mind (e.g., Fisher et al., 2009), others train discrete neuropsychological areas sequentially and hierarchically (attention, then memory then problem-solving; e.g., Bell et al., 2001), while still others focus on the acquisition of strategies to facilitate the learning of information (e.g., Wykes et al., 2007). COG REM programs also vary widely in terms of duration, intensity, training stimuli used, and the degree to which generalization is explicitly targeted (McGurk et al., 2013). Despite these differences, COG REM programs share a common intent, as summarized by a recent statement of the Experts in Cognitive Remediation Workshop (Florence, Italy, 2010): “a behavioral training based intervention that aims to improve cognitive processes (attention, memory, executive function, social cognition or metacognition) with the goals of durability and generalization.” A comprehensive meta-analysis of 40 controlled studies and 2104 participants revealed that COG REM programs produced mild to moderate and durable improvements across summary or global cognition measures (d = .45) as well as in a range of specific cognitive domains (e.g., attention/vigilance, speed of processing), and functioning (Wykes et al., 2011). There was also clear evidence that the impact of these treatments on functioning was boosted by participation in other rehabilitation interventions as compared to stand-alone COG REM interventions (d = .59 vs. d = .28). Thus, given the efficacy of COG REM studies based on this meta-analysis, and the importance of providing other rehabilitation interventions alongside COG REM in order to improve functional outcomes, understanding how COG REM interacts with psychosocial interventions is a crucial next step in this area of research. The Wykes et al. (2011) meta-analysis identified ten studies that provided COG REM in addition to other rehabilitation services. These interventions ranged widely from vocational rehabilitation (e.g., Bell et al., 2001, McGurk et al., 2005, McGurk et al., 2007 and Lindenmayer et al., 2008), to social cognitive training groups (Hogarty et al., 2004), with only two studies combining COG REM with social skills training (SST) (Spaulding et al., 1999 and Silverstein et al., 2009). Neither of these studies used an active control condition for the COG REM program. SST, which includes modeling, behavioral rehearsal through role-plays, and positive and corrective feedback aimed at teaching more effective interpersonal skills, is an evidence-based intervention that has been recommended as a key treatment for schizophrenia by the Patient Outcomes Research Team (PORT) guidelines in the US (Dixon et al., 2010). A meta-analysis of 22 controlled studies of SST demonstrated large effect-size improvements for SST on tests of content mastery of skills taught directly in treatment sessions (d = 1.20), moderate size effects on role-play measures of social and daily living skills (d = .52), other-rated measures of psychosocial function (d = .52) and negative symptoms (d = .40), and small size effects for other symptoms (d = .15) and relapses (d = .23; Kurtz and Mueser, 2008). However, not all individuals with schizophrenia benefit equally from SST. One major impediment to the acquisition of social skills is neurocognitive deficits. A recent review found that in seven out of eight studies impaired neurocognitive functioning was a rate-limiting factor for the acquisition of skills taught in SST (Kurtz, 2011). Several studies have also reported that impairments in neurocognition adversely influence treatment process variables such as treatment attendance, attention, and other indices of group engagement (Kern et al., 1992, McKee et al., 1997 and Granholm et al., 2008). These findings support the hypothesis that improving cognitive skills may facilitate benefit for more people from SST. We report the results of a randomized controlled trial evaluating the effects of computer-assisted COG REM targeting specific domains of cognitive functioning compared to an active control condition of instruction in computer skills (Computer Skills), with participants in both programs also receiving standardized social skills training (SST). This is the first study, to our knowledge, to assess the specificity of effects of COG REM for facilitating response to SST by including a comparison group that controls for non-specific treatment factors related to learning skills on a computer with an active control condition. Previous work from our laboratory revealed that our approach to COG REM produced improvements in attention and working memory that were greater than those produced by the Computer Skills program employed in the current study (see Kurtz et al., 2007). Our primary hypotheses were: (1) individuals in the SST + COG REM condition would improve more in attention and working memory than those in SST + Computer Skills, consistent with our previous work (Kurtz et al., 2007); and (2) COG REM treatment effects would augment the effects of SST on performance-based measures of social skills, as well as ratings of psychosocial function.