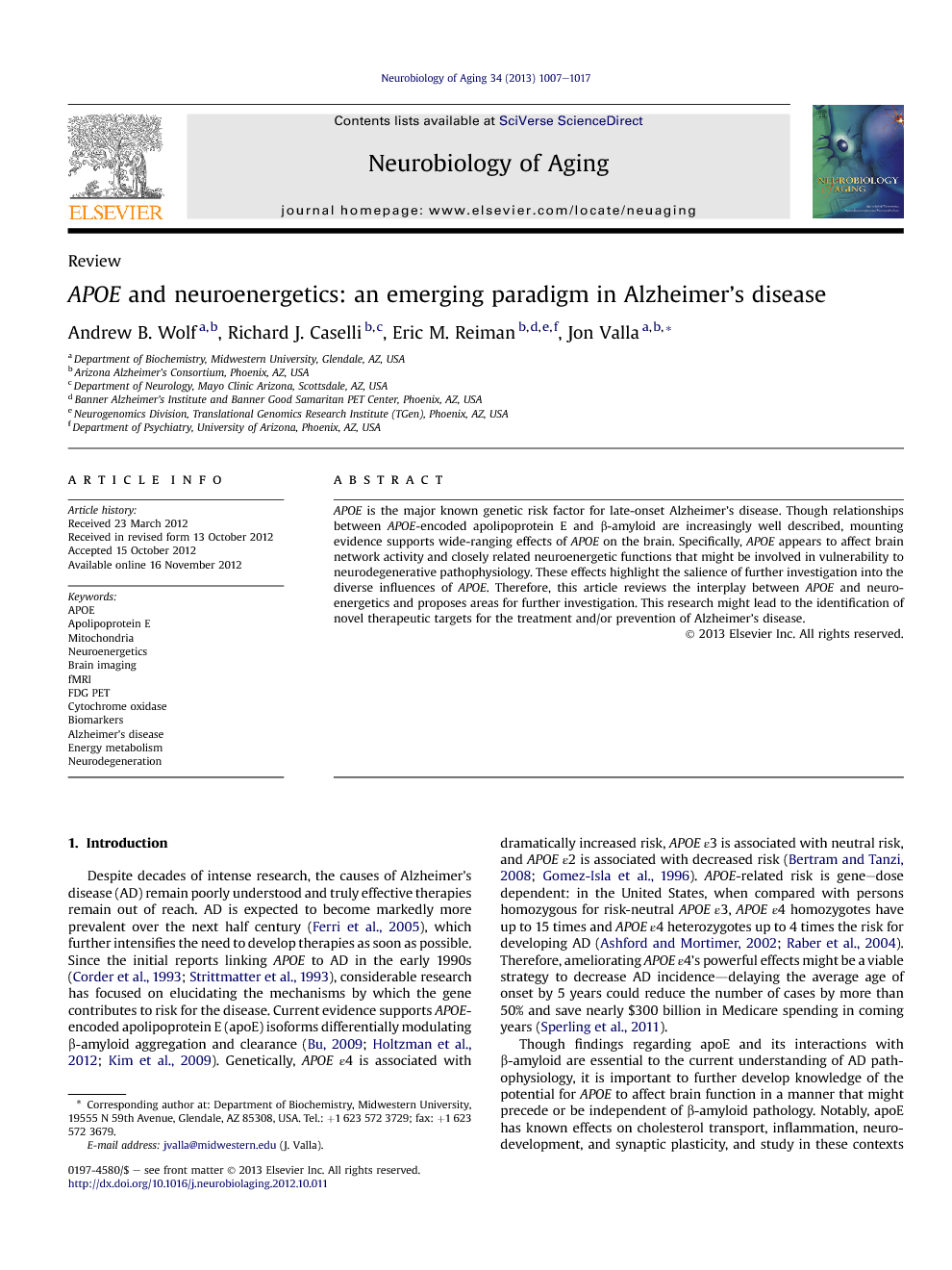 APOE is the major known genetic risk factor for late-onset Alzheimer's disease. Though relationships between APOE-encoded apolipoprotein E and β-amyloid are increasingly well described, mounting evidence supports wide-ranging effects of APOE on the brain. Specifically, APOE appears to affect brain network activity and closely related neuroenergetic functions that might be involved in vulnerability to neurodegenerative pathophysiology. These effects highlight the salience of further investigation into the diverse influences of APOE. Therefore, this article reviews the interplay between APOE and neuroenergetics and proposes areas for further investigation. This research might lead to the identification of novel therapeutic targets for the treatment and/or prevention of Alzheimer's disease.

Despite decades of intense research, the causes of Alzheimer's disease (AD) remain poorly understood and truly effective therapies remain out of reach. AD is expected to become markedly more prevalent over the next half century (Ferri et al., 2005), which further intensifies the need to develop therapies as soon as possible. Since the initial reports linking APOE to AD in the early 1990s ( Corder et al., 1993; Strittmatter et al., 1993), considerable research has focused on elucidating the mechanisms by which the gene contributes to risk for the disease. Current evidence supports APOE-encoded apolipoprotein E (apoE) isoforms differentially modulating β-amyloid aggregation and clearance ( Bu, 2009; Holtzman et al., 2012; Kim et al., 2009). Genetically, APOE ε4 is associated with dramatically increased risk, APOE ε3 is associated with neutral risk, and APOE ε2 is associated with decreased risk ( Bertram and Tanzi, 2008; Gomez-Isla et al., 1996). APOE-related risk is gene–dose dependent: in the United States, when compared with persons homozygous for risk-neutral APOE ε3, APOE ε4 homozygotes have up to 15 times and APOE ε4 heterozygotes up to 4 times the risk for developing AD ( Ashford and Mortimer, 2002; Raber et al., 2004). Therefore, ameliorating APOE ε4’s powerful effects might be a viable strategy to decrease AD incidence—delaying the average age of onset by 5 years could reduce the number of cases by more than 50% and save nearly $300 billion in Medicare spending in coming years ( Sperling et al., 2011). Though findings regarding apoE and its interactions with β-amyloid are essential to the current understanding of AD pathophysiology, it is important to further develop knowledge of the potential for APOE to affect brain function in a manner that might precede or be independent of β-amyloid pathology. Notably, apoE has known effects on cholesterol transport, inflammation, neurodevelopment, and synaptic plasticity, and study in these contexts clearly represents vital avenues of research. Mitochondrial energy metabolism and cellular bioenergetics in the brain (i.e., neuroenergetics) have also begun to be linked to the genetic risk conferred by APOE. Therefore, the intent of this article is to review the brain imaging background and potential cellular and molecular mechanisms for this emerging avenue of approach, with the hope that this rapidly evolving knowledge might stimulate innovative research approaches and the identification of tractable therapeutic targets for treatment and/or prevention of disease.

The strong association between APOE and AD has been known for nearly 2 decades, during which time significant advances have been made in understanding how APOE might contribute to disease risk. Though considerably more research is needed to establish the mechanistic effects of APOE on disease processes, mounting evidence linking APOE to alterations in neuroenergetics has illuminated exciting new areas for research. Because of the apparently early nature of these functional changes (i.e., often apparent in young adults), modulation of related cellular and molecular processes might provide viable targets for therapies aiming to prevent and/or treat AD, and potentially a number of other neurological disorders with possible links to APOE ( Verghese et al., 2011). Though no apoE-directed therapies (e.g., small molecule structure correctors) have yet been used in humans, bioenergetically-relevant therapies have undergone clinical trials. Most prominent have been efforts using intranasal insulin ( Craft et al., 2012; Reger et al., 2006, 2008a, 2008b), ketogenic medium chain triglycerides ( Henderson et al., 2009), and peroxisome proliferator-activated receptor-γ agonists ( Geldmacher et al., 2011; Gold et al., 2010; Risner et al., 2006; Sato et al., 2011; Watson et al., 2005). It remains to be clarified whether clinically affected APOE ε4 carriers and noncarriers might respond differently to amyloid-targeting therapies. A recent Phase II trial of the amyloid antibody therapy bapineuzumab found less benefit in carriers than in noncarriers with AD dementia ( Salloway et al., 2009), but the subsequent Phase III studies failed to demonstrate a clear benefit in AD dementia patients whether they were carriers or noncarriers (not yet published). It has also been suggested that these treatments might be associated with a greater risk of vasogenic edema and cerebral microhemorrhage in clinically affected carriers than noncarriers (Salloway et al., 2009), perhaps related to blood-brain barrier breakdown in APOE ε4 carriers ( Bell et al., 2012). If a differential response to these and other treatments are confirmed in APOE ε4 carriers and noncarriers, it could be attributable to the apoE4 protein or, perhaps more likely, underlying disease severity (because each copy of the ε4 allele in a person's APOE genotype is associated with a younger average age at onset, it is possible that the treated AD dementia patients who carry the APOE ε4 allele have greater disease severity than the treated noncarriers of the same age). An alternative, or perhaps synergistic, interpretation of the APOE ε4-associated deficits in AD, considering the early functional ( Reiman et al., 2004; Valla et al., 2010) and morphologic changes ( Alexopoulos et al., 2011; Shaw et al., 2007) reported in APOE ε4 carriers, is that these alterations do not reflect progressive disease-related changes in the brain but rather APOE-related neurodevelopmental alterations. As such, APOE ε4 might convey a developmental limitation that provides a foothold for the regional vulnerability that contributes to an earlier age of clinical onset decades later. Such a model would fit well with the concept of cognitive reserve in that APOE ε4 carriers might not demonstrate equivalent synaptic number or dendritic complexity, as in apoE-expressing mice ( Dumanis et al., 2009; Ji et al., 2003), and thus far reported to manifest as reduced entorhinal cortical thickness in young human subjects ( Shaw et al., 2007). Additionally, further understanding of the role of TOMM40 polymorphisms might provide insight. Hopefully, the extension of current knowledge can lead to continued improvement in elucidating the causes of disease and correspondingly the development of critically needed therapies.