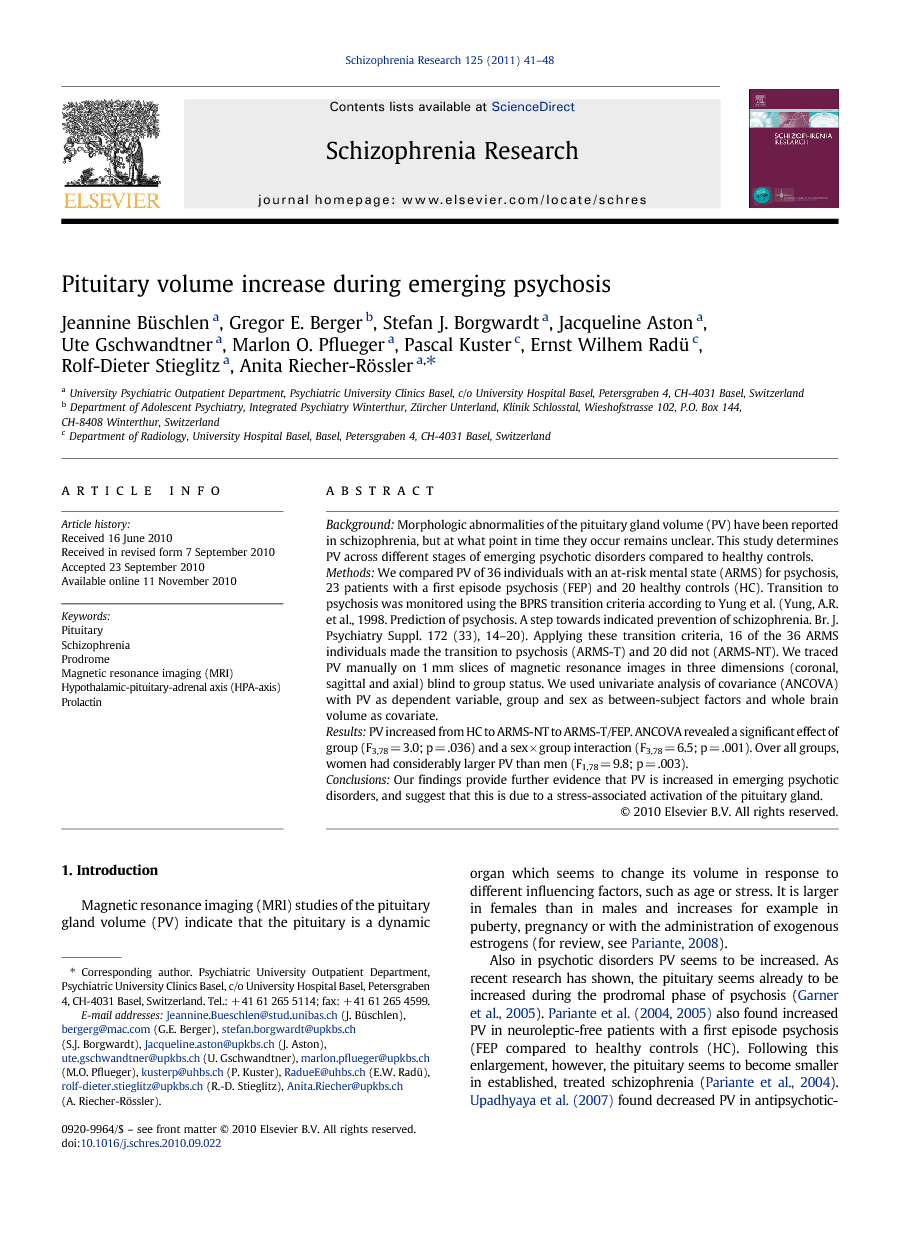 Background Morphologic abnormalities of the pituitary gland volume (PV) have been reported in schizophrenia, but at what point in time they occur remains unclear. This study determines PV across different stages of emerging psychotic disorders compared to healthy controls. Methods We compared PV of 36 individuals with an at-risk mental state (ARMS) for psychosis, 23 patients with a first episode psychosis (FEP) and 20 healthy controls (HC). Transition to psychosis was monitored using the BPRS transition criteria according to Yung et al. (Yung, A.R. et al., 1998. Prediction of psychosis. A step towards indicated prevention of schizophrenia. Br. J. Psychiatry Suppl. 172 (33), 14–20). Applying these transition criteria, 16 of the 36 ARMS individuals made the transition to psychosis (ARMS-T) and 20 did not (ARMS-NT). We traced PV manually on 1 mm slices of magnetic resonance images in three dimensions (coronal, sagittal and axial) blind to group status. We used univariate analysis of covariance (ANCOVA) with PV as dependent variable, group and sex as between-subject factors and whole brain volume as covariate. Results PV increased from HC to ARMS-NT to ARMS-T/FEP. ANCOVA revealed a significant effect of group (F3,78 = 3.0; p = .036) and a sex × group interaction (F3,78 = 6.5; p = .001). Over all groups, women had considerably larger PV than men (F1,78 = 9.8; p = .003). Conclusions Our findings provide further evidence that PV is increased in emerging psychotic disorders, and suggest that this is due to a stress-associated activation of the pituitary gland.

Magnetic resonance imaging (MRI) studies of the pituitary gland volume (PV) indicate that the pituitary is a dynamic organ which seems to change its volume in response to different influencing factors, such as age or stress. It is larger in females than in males and increases for example in puberty, pregnancy or with the administration of exogenous estrogens (for review, see Pariante, 2008). Also in psychotic disorders PV seems to be increased. As recent research has shown, the pituitary seems already to be increased during the prodromal phase of psychosis (Garner et al., 2005). Pariante et al., 2004 and Pariante et al., 2005 also found increased PV in neuroleptic-free patients with a first episode psychosis (FEP compared to healthy controls (HC). Following this enlargement, however, the pituitary seems to become smaller in established, treated schizophrenia (Pariante et al., 2004). Upadhyaya et al. (2007) found decreased PV in antipsychotic-naïve schizophrenia patients after an average duration of psychosis of two years. They and also Tournikioti et al. (2007) found an inverse relationship between duration of illness and PV. The pituitary gland produces different hormones which have been described to be abnormal in schizophrenic psychoses. Thus, it secretes adrenocorticotropic hormone (ACTH), which regulates the hypothalamic-pituitary-adrenal (HPA) axis, and HPA abnormalities have been described in psychoses (for review, see Pariante (2008)). Furthermore, it secretes the follicle stimulating hormone (FSH) and luteinizing hormone (LH) that regulate the hypothalamic-pituitary-gonadal (HPG) axis, which has been found to be suppressed in patients with schizophrenia (Riecher-Rössler et al., 1994 and Riecher-Rössler et al., 1998). It also produces prolactin which has been shown to be increased in many patients with schizophrenic psychoses, even in neuroleptic-free FEP patients (Kahn et al., 2008) and in at-risk mental state (ARMS) individuals (Rechsteiner et al., 2007 and Aston et al., 2010). Thus, it could well be that schizophrenic psychoses are associated with an abnormal volume of the pituitary as a consequence of a dysfunction in these hormonal systems. We therefore examined PV changes in emerging psychosis and assessed the timing of the changes in an MRI study. We compared PV between HC, FEP patients, and ARMS individuals. We further compared PV between ARMS who made a transition to psychosis (ARMS-T) and ARMS individuals who did not (ARMS-NT). Based on previous neuroimaging studies of subjects with ARMS (see previously mentioned data; for review see Smieskova et al., 2010), we expected PV to increase with the emergence of psychosis (HC < ARMS-NT < ARMS-T < FEP). To our knowledge this is the first study comparing these four groups.

In conclusion, our findings seem to indicate that volumetric alterations of the pituitary gland emerge during the prodromal and peri-onset phase of psychotic disorders and may reflect a hyperactivation of hormonal functions of the pituitary gland, particularly in women. Our findings especially encourage further investigation of the role of the HPA/HPG-axis as well as prolactin in emerging psychotic disorders as well as prospective longitudinal neuroimaging studies from ARMS onwards.