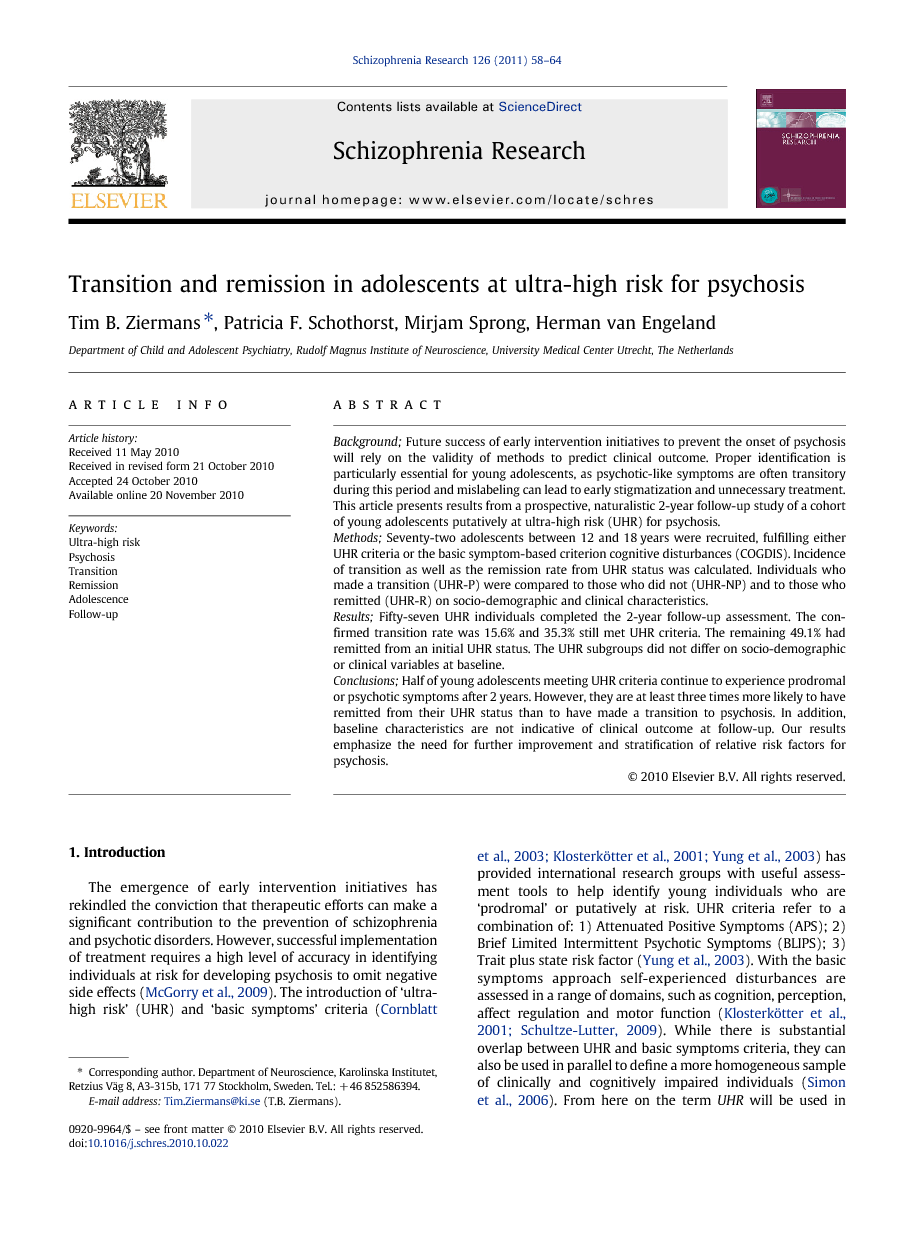 Background Future success of early intervention initiatives to prevent the onset of psychosis will rely on the validity of methods to predict clinical outcome. Proper identification is particularly essential for young adolescents, as psychotic-like symptoms are often transitory during this period and mislabeling can lead to early stigmatization and unnecessary treatment. This article presents results from a prospective, naturalistic 2-year follow-up study of a cohort of young adolescents putatively at ultra-high risk (UHR) for psychosis. Methods Seventy-two adolescents between 12 and 18 years were recruited, fulfilling either UHR criteria or the basic symptom-based criterion cognitive disturbances (COGDIS). Incidence of transition as well as the remission rate from UHR status was calculated. Individuals who made a transition (UHR-P) were compared to those who did not (UHR-NP) and to those who remitted (UHR-R) on socio-demographic and clinical characteristics. Results Fifty-seven UHR individuals completed the 2-year follow-up assessment. The confirmed transition rate was 15.6% and 35.3% still met UHR criteria. The remaining 49.1% had remitted from an initial UHR status. The UHR subgroups did not differ on socio-demographic or clinical variables at baseline. Conclusions Half of young adolescents meeting UHR criteria continue to experience prodromal or psychotic symptoms after 2 years. However, they are at least three times more likely to have remitted from their UHR status than to have made a transition to psychosis. In addition, baseline characteristics are not indicative of clinical outcome at follow-up. Our results emphasize the need for further improvement and stratification of relative risk factors for psychosis.

The emergence of early intervention initiatives has rekindled the conviction that therapeutic efforts can make a significant contribution to the prevention of schizophrenia and psychotic disorders. However, successful implementation of treatment requires a high level of accuracy in identifying individuals at risk for developing psychosis to omit negative side effects (McGorry et al., 2009). The introduction of ‘ultra-high risk’ (UHR) and ‘basic symptoms’ criteria (Cornblatt et al., 2003, Klosterkötter et al., 2001 and Yung et al., 2003) has provided international research groups with useful assessment tools to help identify young individuals who are ‘prodromal’ or putatively at risk. UHR criteria refer to a combination of: 1) Attenuated Positive Symptoms (APS); 2) Brief Limited Intermittent Psychotic Symptoms (BLIPS); 3) Trait plus state risk factor (Yung et al., 2003). With the basic symptoms approach self-experienced disturbances are assessed in a range of domains, such as cognition, perception, affect regulation and motor function (Klosterkötter et al., 2001 and Schultze-Lutter, 2009). While there is substantial overlap between UHR and basic symptoms criteria, they can also be used in parallel to define a more homogeneous sample of clinically and cognitively impaired individuals (Simon et al., 2006). From here on the term UHR will be used in reference to studies applying UHR and/or basic symptoms criteria. UHR criteria have been relatively successful in identifying individuals at incipient risk of a psychotic transition. While the overall estimate of the 1-year transition rate is 36.7% (Ruhrmann et al., 2003), individual study sites have reported transition rates as low as 9% (Carr et al., 2000) and as high as 70% (Klosterkötter et al., 2001), with follow-up intervals ranging from 1 to 9.6 years (Cannon et al., 2008). Additionally, recent reports of declining transition rates (15–19%) have been attributed to earlier referral, effective treatment strategies and/or inclusion of a larger proportion of ‘false positives’ (Haroun et al., 2006, Ruhrmann et al., 2010 and Yung et al., 2008). Two recent studies on clinical remission in UHR individuals (Simon and Umbricht, 2010 and Velthorst et al., 2010) showed that a 50–75% of UHR individuals between 12 and 40 years of age remit from their initial UHR status within 1 to 3 years post-inclusion. The authors concluded that symptoms may be transitory for a majority of UHR individuals which increases the chance of social stigma by mislabeling. This may particularly hold for individuals in the young adolescent phase, when prodromal and psychotic-like experiences are most likely to occur for the first time (Häfner, 1995 and Häfner and Maurer, 2006). Prevalence of prodromal symptoms in typically developing adolescents can be relatively high (30%) (Meng et al., 2009) and show high levels of discontinuation (van Os et al., 2009, Escher et al., 2002 and Simon et al., 2009). Because peak age of onset for psychotic disorders is estimated around the late teens/early twenties (Kessler et al., 2007), and early onset psychosis may represent more severe variants of the disorder (Amminger et al., 2006 and Hollis, 2000), it is of critical importance to test the predictive validity of UHR criteria in adolescent cohorts (Borgmann-Winter et al., 2006). The present report is an exploratory investigation of the clinical outcome of an adolescent UHR cohort from the Dutch Prediction of Psychosis Study (DUPS), a naturalistic longitudinal study (Sprong et al., 2008). Rates for transition and remission are discussed and baseline characteristics are compared for individuals with different clinical outcomes. It was hypothesized that a considerable amount of UHR adolescents would no longer meet UHR criteria at the 2-year follow-up assessment. Additionally, it was expected that clinical status at follow-up would be independent of any differences in socio-demographic and clinical characteristics at baseline.