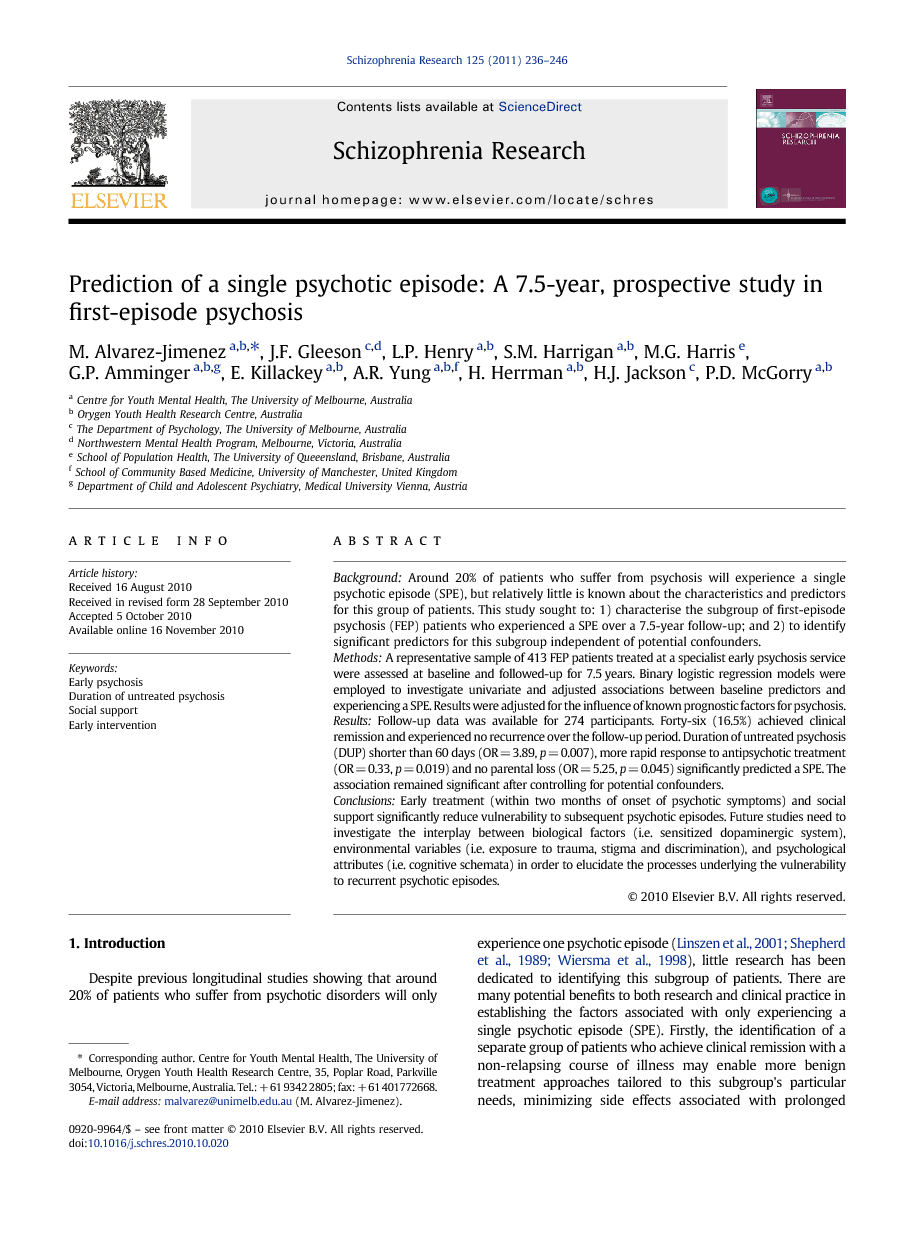 Background Around 20% of patients who suffer from psychosis will experience a single psychotic episode (SPE), but relatively little is known about the characteristics and predictors for this group of patients. This study sought to: 1) characterise the subgroup of first-episode psychosis (FEP) patients who experienced a SPE over a 7.5-year follow-up; and 2) to identify significant predictors for this subgroup independent of potential confounders. Methods A representative sample of 413 FEP patients treated at a specialist early psychosis service were assessed at baseline and followed-up for 7.5 years. Binary logistic regression models were employed to investigate univariate and adjusted associations between baseline predictors and experiencing a SPE. Results were adjusted for the influence of known prognostic factors for psychosis. Results Follow-up data was available for 274 participants. Forty-six (16.5%) achieved clinical remission and experienced no recurrence over the follow-up period. Duration of untreated psychosis (DUP) shorter than 60 days (OR = 3.89, p = 0.007), more rapid response to antipsychotic treatment (OR = 0.33, p = 0.019) and no parental loss (OR = 5.25, p = 0.045) significantly predicted a SPE. The association remained significant after controlling for potential confounders. Conclusions Early treatment (within two months of onset of psychotic symptoms) and social support significantly reduce vulnerability to subsequent psychotic episodes. Future studies need to investigate the interplay between biological factors (i.e. sensitized dopaminergic system), environmental variables (i.e. exposure to trauma, stigma and discrimination), and psychological attributes (i.e. cognitive schemata) in order to elucidate the processes underlying the vulnerability to recurrent psychotic episodes.

Despite previous longitudinal studies showing that around 20% of patients who suffer from psychotic disorders will only experience one psychotic episode (Linszen et al., 2001, Shepherd et al., 1989 and Wiersma et al., 1998), little research has been dedicated to identifying this subgroup of patients. There are many potential benefits to both research and clinical practice in establishing the factors associated with only experiencing a single psychotic episode (SPE). Firstly, the identification of a separate group of patients who achieve clinical remission with a non-relapsing course of illness may enable more benign treatment approaches tailored to this subgroup's particular needs, minimizing side effects associated with prolonged exposure to antipsychotic medication (Alvarez-Jimenez et al., 2008, Alvarez-Jimenez et al., 2009a, Alvarez-Jimenez et al., 2009b, an der Heiden and Hafner, 2000, Bola and Mosher, 2002 and Carpenter and Heinrichs, 1981). Secondly, establishing treatment and environmental factors that have an effect on the long-term course of the illness would shed light on modifiable prognostic characteristics. This would, in turn, inform public health policies and the development of novel therapies targeting these factors (van Os and Kapur, 2009). A study that aims to discriminate factors associated with experiencing a SPE from potential confounders needs to meet strict methodological criteria. Firstly, a prospective first-episode psychosis (FEP) study is necessary in which participants are recruited and assessed at first treatment contact, free from the confounding effects of previous treatment interventions or secondary morbidity (Ram et al., 1992). Secondly, such a study should include recruitment of an incident, multi-diagnostic FEP cohort, as opposed to convenience samples of limited diagnostic range which are likely to create selection biases that impede generalizability of the findings to ‘real world’ settings (Henry et al., 2007). Thirdly, the study should be properly powered to investigate the influence of relevant predictors independent of potential confounders. Finally, the duration of follow-up should extend beyond the critical period (i.e. the first 5 years after the onset of psychosis) after which the level of disability sustained, or recovery achieved, is thought to endure into the long-term (Birchwood et al., 1998 and Crumlish et al., 2009). Only a few longitudinal FEP studies have conducted prospective assessments beyond 5 years; however they have exclusively focused on patients with schizophrenia (an der Heiden and Hafner, 2000, Breier et al., 1991, Mason et al., 1995, Munk-Jorgensen and Mortensen, 1989 and Wiersma et al., 1998), recruited convenience or small samples of newly admitted inpatients (Bottlender et al., 2003, Carpenter and Strauss, 1991 and Linszen et al., 2001), or they have examined predictors of recovery without isolating the subset of patients who only experience one psychotic episode (Crumlish et al., 2009 and Robinson et al., 2004) or controlling for potential confounders (Robinson et al., 2004). To date, no single study has reliably characterized the group of patients who only experience one psychotic episode or identified prognostic factors for this subgroup independent of potential confounders. In the present study we recruited a large, epidemiologically representative cohort of FEP patients presenting at a specialized FEP service followed them up over a 7.5-year period. We sought to: 1) characterise the subgroup of FEP patients who experienced a SPE; 2) identify independent predictors of SPE after controlling for potential confounders; and 3) evaluate an hypothesised model of the relationships between relevant predictive factors and experiencing a SPE.