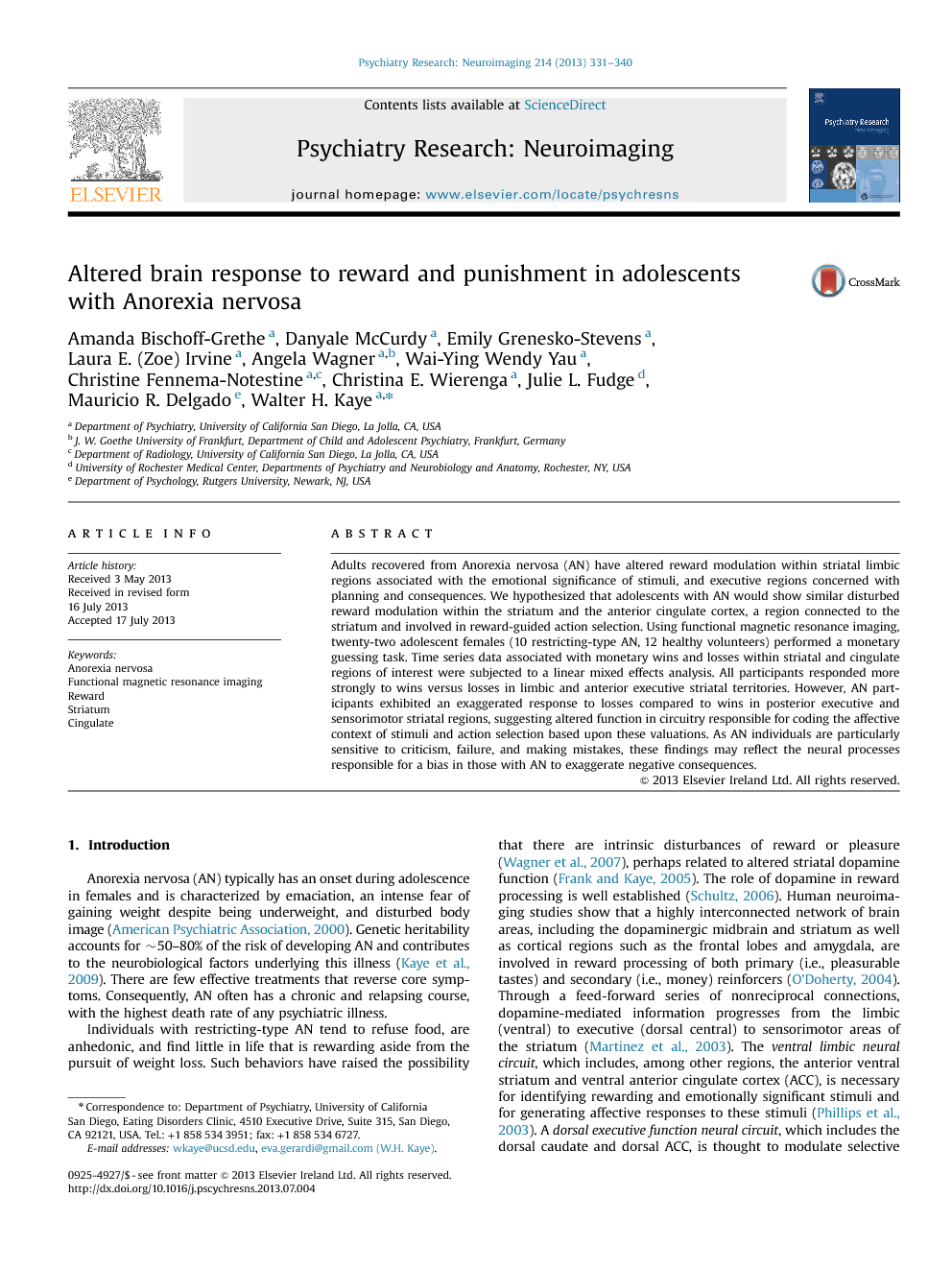 Adults recovered from Anorexia nervosa (AN) have altered reward modulation within striatal limbic regions associated with the emotional significance of stimuli, and executive regions concerned with planning and consequences. We hypothesized that adolescents with AN would show similar disturbed reward modulation within the striatum and the anterior cingulate cortex, a region connected to the striatum and involved in reward-guided action selection. Using functional magnetic resonance imaging, twenty-two adolescent females (10 restricting-type AN, 12 healthy volunteers) performed a monetary guessing task. Time series data associated with monetary wins and losses within striatal and cingulate regions of interest were subjected to a linear mixed effects analysis. All participants responded more strongly to wins versus losses in limbic and anterior executive striatal territories. However, AN participants exhibited an exaggerated response to losses compared to wins in posterior executive and sensorimotor striatal regions, suggesting altered function in circuitry responsible for coding the affective context of stimuli and action selection based upon these valuations. As AN individuals are particularly sensitive to criticism, failure, and making mistakes, these findings may reflect the neural processes responsible for a bias in those with AN to exaggerate negative consequences.

Anorexia nervosa (AN) typically has an onset during adolescence in females and is characterized by emaciation, an intense fear of gaining weight despite being underweight, and disturbed body image (American Psychiatric Association, 2000). Genetic heritability accounts for ~50–80% of the risk of developing AN and contributes to the neurobiological factors underlying this illness (Kaye et al., 2009). There are few effective treatments that reverse core symptoms. Consequently, AN often has a chronic and relapsing course, with the highest death rate of any psychiatric illness. Individuals with restricting-type AN tend to refuse food, are anhedonic, and find little in life that is rewarding aside from the pursuit of weight loss. Such behaviors have raised the possibility that there are intrinsic disturbances of reward or pleasure (Wagner et al., 2007), perhaps related to altered striatal dopamine function (Frank and Kaye, 2005). The role of dopamine in reward processing is well established (Schultz, 2006). Human neuroimaging studies show that a highly interconnected network of brain areas, including the dopaminergic midbrain and striatum as well as cortical regions such as the frontal lobes and amygdala, are involved in reward processing of both primary (i.e., pleasurable tastes) and secondary (i.e., money) reinforcers (O’Doherty, 2004). Through a feed-forward series of nonreciprocal connections, dopamine-mediated information progresses from the limbic (ventral) to executive (dorsal central) to sensorimotor areas of the striatum (Martinez et al., 2003). The ventral limbic neural circuit, which includes, among other regions, the anterior ventral striatum and ventral anterior cingulate cortex (ACC), is necessary for identifying rewarding and emotionally significant stimuli and for generating affective responses to these stimuli ( Phillips et al., 2003). A dorsal executive function neural circuit, which includes the dorsal caudate and dorsal ACC, is thought to modulate selective attention, planning, and effortful regulation of affective states. The sensorimotor circuit includes the posterior putamen and motor cingulate; this circuit is involved with movement and stimulus-response habits ( Yin and Knowlton, 2006). Together, these circuits code stimulus-reward value, maintain representations of predicted future reward and future behavioral choice, and transform decisions into motor output, thereby integrating and evaluating reward prediction to guide decisions. Striatal dysfunction may contribute to many behaviors seen in AN, including altered reward and affect, decision-making, executive control, and decreased food ingestion ( Kaye et al., 2009). Prior studies by our group have shown that adults recovered from AN (Wagner et al., 2007) exhibit a failure to differentiate feedback valence in ventral striatal regions and an exaggerated response to both reward and punishment in dorsal executive regions in a simple monetary choice feedback task (Delgado et al., 2000) relative to healthy comparison women. Findings in recovered adult AN may be confounded by years of malnutrition or treatment; alternatively, they may be traits of the disorder. The current study investigated AN when ill during adolescence. A replication of altered striatal response to reward and punishment in ill adolescent AN using the same monetary choice task previously employed in recovered adult AN (Wagner et al., 2007) would provide support for the notion that altered limbic and executive striatal processes may be trait related. Recent studies have shown that adults with AN have structural (Friederich et al., 2012) and functional (Zastrow et al., 2009) alterations within the cingulate, a region that is strongly interconnected with the striatum (Haber and Knutson, 2010) and may be subdivided based upon its response to feedback valence (Liu et al., 2011). Notably, Delgado et al. (2005) reported rostral ACC response in healthy volunteers to a probabilistic cue period as well as to feedback in a variant of the task presented herein. As voxelwise analyses of the monetary choice task have also reported anterior cingulate activation (Delgado et al., 2000, May et al., 2004 and Wagner et al., 2007), we have included this area as a region of interest.

This is the first study, to our knowledge, to show altered response to monetary reward processing in adolescents ill with AN compared to healthy adolescents. The results suggest that, while limbic striatal regions tend to respond to wins in a similar fashion as seen in healthy adolescents, there is an exaggerated response to losses in the posterior striatal areas. These results support the notion that individuals with AN may be sensitive to punishment, and that this may be an underlying trait of the disorder. Additional studies are needed to further examine whether this sensitivity to punishment has implications for patients' with AN action-outcome learning, and whether this is a stable trait post-recovery.