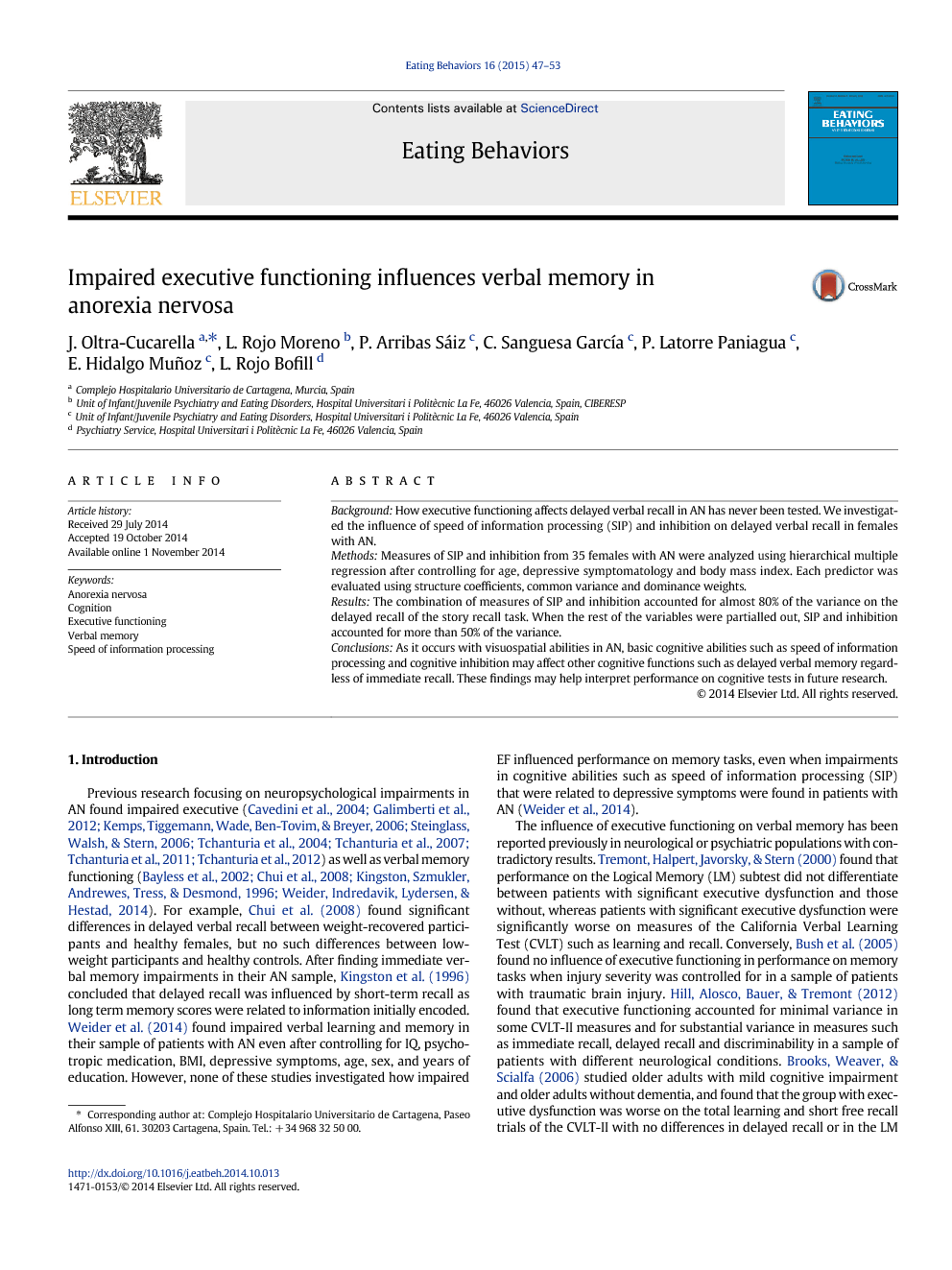 Background How executive functioning affects delayed verbal recall in AN has never been tested. We investigated the influence of speed of information processing (SIP) and inhibition on delayed verbal recall in females with AN. Methods Measures of SIP and inhibition from 35 females with AN were analyzed using hierarchical multiple regression after controlling for age, depressive symptomatology and body mass index. Each predictor was evaluated using structure coefficients, common variance and dominance weights. Results The combination of measures of SIP and inhibition accounted for almost 80% of the variance on the delayed recall of the story recall task. When the rest of the variables were partialled out, SIP and inhibition accounted for more than 50% of the variance. Conclusions As it occurs with visuospatial abilities in AN, basic cognitive abilities such as speed of information processing and cognitive inhibition may affect other cognitive functions such as delayed verbal memory regardless of immediate recall. These findings may help interpret performance on cognitive tests in future research.

Previous research focusing on neuropsychological impairments in AN found impaired executive (Cavedini et al., 2004, Galimberti et al., 2012, Kemps et al., 2006, Steinglass et al., 2006, Tchanturia et al., 2004, Tchanturia et al., 2007, Tchanturia et al., 2011 and Tchanturia et al., 2012) as well as verbal memory functioning (Bayless et al., 2002, Chui et al., 2008, Kingston et al., 1996 and Weider et al., 2014). For example, Chui et al. (2008) found significant differences in delayed verbal recall between weight-recovered participants and healthy females, but no such differences between low-weight participants and healthy controls. After finding immediate verbal memory impairments in their AN sample, Kingston et al. (1996) concluded that delayed recall was influenced by short-term recall as long term memory scores were related to information initially encoded. Weider et al. (2014) found impaired verbal learning and memory in their sample of patients with AN even after controlling for IQ, psychotropic medication, BMI, depressive symptoms, age, sex, and years of education. However, none of these studies investigated how impaired EF influenced performance on memory tasks, even when impairments in cognitive abilities such as speed of information processing (SIP) that were related to depressive symptoms were found in patients with AN (Weider et al., 2014). The influence of executive functioning on verbal memory has been reported previously in neurological or psychiatric populations with contradictory results. Tremont, Halpert, Javorsky, & Stern (2000) found that performance on the Logical Memory (LM) subtest did not differentiate between patients with significant executive dysfunction and those without, whereas patients with significant executive dysfunction were significantly worse on measures of the California Verbal Learning Test (CVLT) such as learning and recall. Conversely, Bush et al. (2005) found no influence of executive functioning in performance on memory tasks when injury severity was controlled for in a sample of patients with traumatic brain injury. Hill, Alosco, Bauer, & Tremont (2012) found that executive functioning accounted for minimal variance in some CVLT-II measures and for substantial variance in measures such as immediate recall, delayed recall and discriminability in a sample of patients with different neurological conditions. Brooks, Weaver, & Scialfa (2006) studied older adults with mild cognitive impairment and older adults without dementia, and found that the group with executive dysfunction was worse on the total learning and short free recall trials of the CVLT-II with no differences in delayed recall or in the LM task. However, to our knowledge no work to date has studied the effects of EF on verbal learning and memory in AN, though it is an area that warrants further research. Oltra-Cucarella et al. (2014) found significant differences in both immediate and delayed recall between patients with AN and a healthy control group unrelated to the variations on the Body Mass Index (BMI). Contrary to the findings reported by others (Kingston et al., 1996), delayed recall impairments were not due to short-term recall impairments as they were found in different tasks with no significant correlations with one another. While differences in short term recall were found in the TAVEC test (the Spanish adaptation of the CVLT (Benedet & Alejandre, 1998)), differences in delayed recall were found in the Logical Memory subtest (Wechsler, 1997). However, no short-term differences were found in the LM test. Impaired SIP and EF such as inhibition were also found in the AN sample. One plausible explanation for the differences in delayed but not in immediate verbal memory using the LM test is the effect of EF on verbal recall. Duff, Schoenberg, Scott, & Adams (2005) found that verbal memory and EF shared 55% of the variance in a sample of participants with suspected neurological or psychiatric conditions. Leeson et al., (2010) found that SIP significantly correlated with verbal memory in a sample of first-episode psychosis patients, and that it was a significant predictor of cognitive impairment at one year follow-up. Fossati, Amar, Raoux, Ergis, & Allaire (1999), assessing a sample of unipolar and bipolar depressed patients, found that both executive functioning and age independently affected memory performance both in young and old participants, with no interaction between those variables. Two factors suggest that lower LM delayed recall scores reflected executive functioning and not memory deficits per se in the study by Oltra-Cucarella et al. (2014). First, both the delayed free and cued recall and the recognition tasks were within normal ranges in the TAVEC test, so it could be concluded that verbal learning and memory were unimpaired. Second, both SIP and inhibition were impaired in the AN sample. It was hypothesized that, on the one hand, slow information processing could hinder delayed retrieval as target material was not rapidly available when recall was requested. On the other hand, disinhibited behavior could have caused that AN participants finished delayed recall before all the stored information had been successfully retrieved. Thus, a combination of slow processing speed and impulsivity could causes a behavior which mimics delayed verbal memory impairments when, in fact, no such deficits are present. This work is aimed at providing objective data of the influence of EF on verbal memory in AN, because previous research has found both executive and verbal memory impairments in AN but none studied their mutual relations. Our hypothesis was that if LM delayed recall is partly accounted for by SIP and inhibition, then performance on tasks measuring SIP and inhibition would predict performance on the LM test. Moreover, we expected that SIP and inhibition accounted for a larger part of the variance of delayed recall compared to encoding (immediate recall).