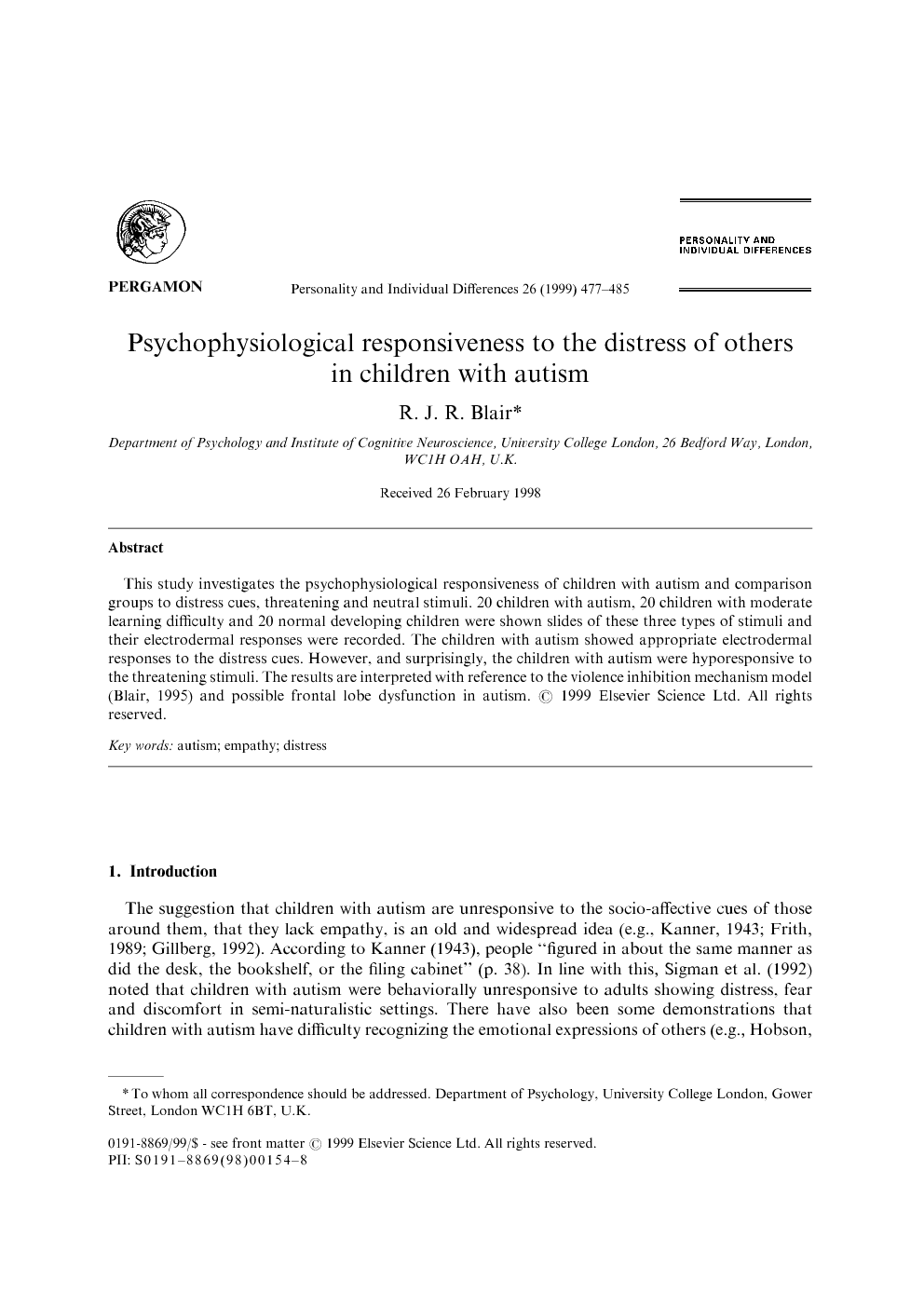 The suggestion that children with autism are unresponsive to the socio-affective cues of thosearound them, that they lack empathy, is an old and widespread idea (e.g., Kanner, 1943; Frith, 1989; Gillberg, 1992). According to Kanner, 1943, people figured inabout the same manner as did the desk, the bookshelf, or the filing cabinet (p. 38). In line with this,Sigman et al. (1992)noted that children with autism were behaviorally unresponsive to adultsshowing distress, fear and discomfort in semi-naturalistic settings. There have also been somedemonstrations that children with autism have difficulty recognizing the emotional expressions ofothers (e.g., Hobson, 1986; Tantam et al., 1989; Bormann-Kischkel et al., 1995). In addition, children with autism have been found to show difficulties in detecting intermodalcorrespondence of facial and vocal/ linguistic affect (e.g., Hobson et al., 1988; Loveland et al., 1995). However, there are contrasting reports which indicate that children with autism are notentirely un-responsive to the socio-affective cues of those around them. According to Wing and Gould (1979), the social impairment of the autistic child need not manifest itself in the avoidanceof social contact as Kanner, 1943described. They noted that some children with autism weremerely passive or even actively sociable in a peculiar fashion. Phillips et al. (1995)found thatchildren with autism did not treat people as objects when problem solving. Yirmiya et al. (1992)found that autistic children performed surprisingly well on the Feshbach and Powellaudiovisual test for empathy (Feshbach, 1982) although they were impaired relative tonormally developing controls. Also, children with autism have been found to be unimpaired in facialaffect recognition when the control group was matched on verbal mental age (e.g., Ozonoff et al., 1990; Prior et al., 1990). In addition, several studies have found the emotion processingimpairment to be pronounced only when the emotion is a complex cognitive emotion such as surpriseor embarrassment (e.g., Capps et al., 1992; Baron-Cohen et al., 1993; Bormann-Kischkel et al., 1995). Finally, while Davies et al. (1994)found that high abilitychildren with autism did show difficulties in facial affect matching tasks relative to controls, they alsoshowed difficulties on non-facial stimuli matching tasks. Davies et al. (1994)suggested thatthis indicates that there may be a general perceptual deficit in children with autism which is notspecific to faces or emotions. While there has been considerable work investigating the ability of children with autism torecognise and interpret facial expressions, there have been no direct tests of the emotionalresponsiveness of the child with autism to emotion expressions. This study specifically investigatedthe psychophysiological responsiveness of children with autism to the facial expression of sadness byexamining their skin conductance responses to this expression. Skin conductance responses have beenfound to give a reliable measure of emotional arousal (Greenwald et al., 1989). In addition,skin conductance has been used to specifically index empathic responsiveness to the distress of others(e.g., Fabes et al., 1994). There is reason to believe that children with autism may emotionally respond to distress ofothers; autistic children are unimpaired on a test of the moral/conventional distinction (Blair, 1996). Moral transgressions are defined as acts which result in victims (e.g., an individual hurtinganother). Conventional transgressions are acts which do not commonly result in victims but do resultin social disorder (e.g., a boy dressing in a skirt); Turiel, 1983. It is hypothesized that theaffective response to the distress of victims is the basis of the moral/conventional distinction (Blair, 1995). This hypothesis is supported by the finding that individuals who do not show emotionalresponses to the distress cues of others, psychopaths (House and Milligan, 1976; Aniskiewicz, 1979; Blair et al., 1997), have been found to fail to make themoral/conventional distinction (e.g., Blair, 1995, Blair, 1997; Blair et al., 1997). The main objective of the present study was to determine the responsiveness of children withautism to distress cues. This issue was examined by comparing the responsiveness of children withautism and comparison groups to distress cues, threatening stimuli and neutral stimuli. The procedurefollowed that used previously with adults with psychopathy (Blair et al., 1997) and childrenwith psychopathic tendencies (Blair, submitted). On the basis of the earlier finding thatchildren with autism are able to make the moral/conventional distinction, it was predicted that thechildren with autism should show psychophysiological responsiveness to the distress of others. Thepresent study tests this prediction.