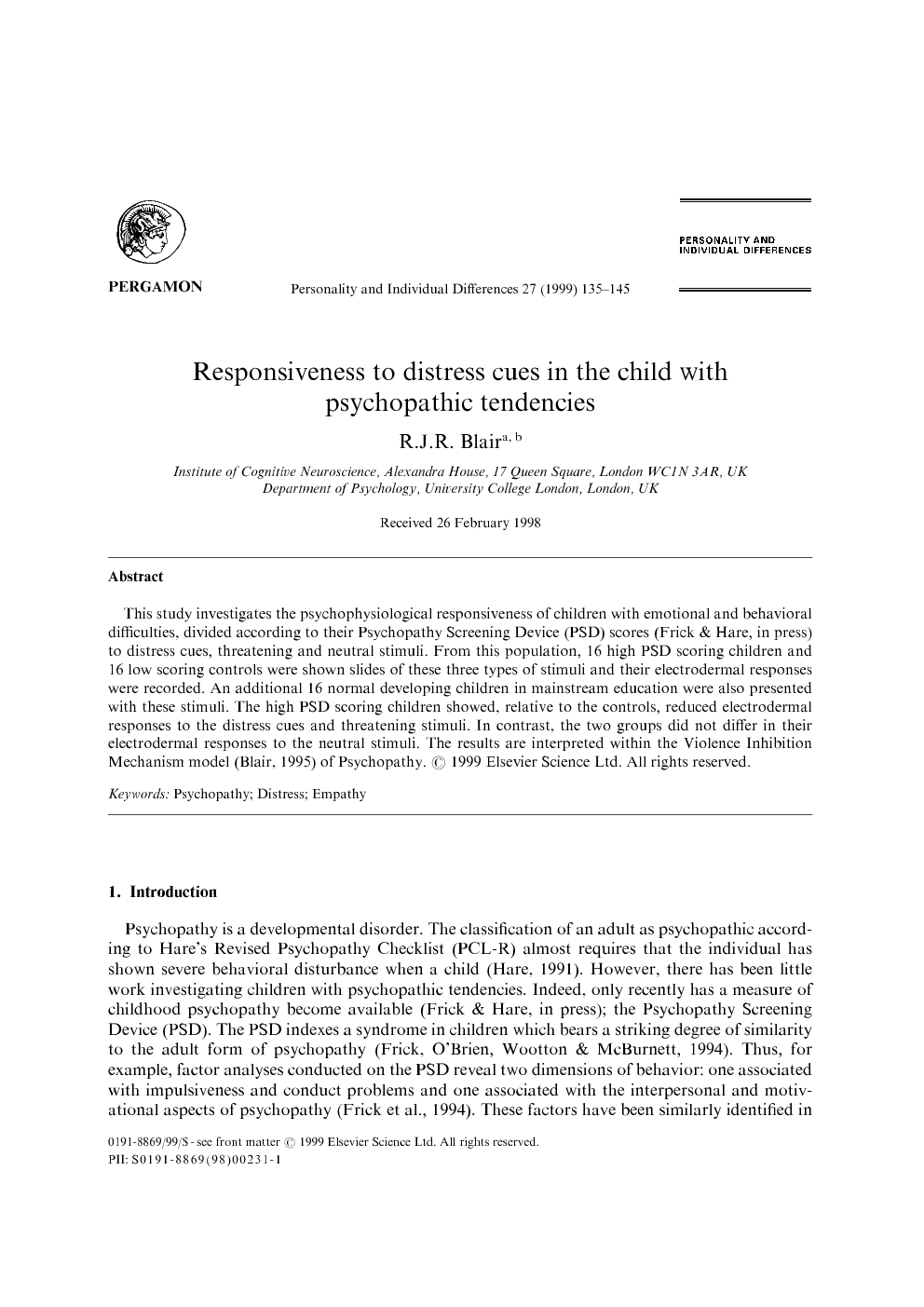 This study investigates the psychophysiological responsiveness of children with emotional and behavioral difficulties, divided according to their Psychopathy Screening Device (PSD) scores (Frick and Hare, in press) to distress cues, threatening and neutral stimuli. From this population, 16 high PSD scoring children and 16 low scoring controls were shown slides of these three types of stimuli and their electrodermal responses were recorded. An additional 16 normal developing children in mainstream education were also presented with these stimuli. The high PSD scoring children showed, relative to the controls, reduced electrodermal responses to the distress cues and threatening stimuli. In contrast, the two groups did not differ in their electrodermal responses to the neutral stimuli. The results are interpreted within the Violence Inhibition Mechanism model (Blair, 1995) of Psychopathy.

Psychopathy is a developmental disorder. The classification of an adult as psychopathic according to Hares Revised Psychopathy Checklist (PCL-R) almost requires that the individual has shown severe behavioral disturbance when a child (Hare, 1991). However, there has been little work investigating children with psychopathic tendencies. Indeed, only recently has a measure of childhood psychopathy become available (Frick and Hare, in press); the Psychopathy Screening Device (PSD). The PSD indexes a syndrome in children which bears a striking degree of similarity to the adult form of psychopathy (Frick et al., 1994). Thus, for example, factor analyses conducted on the PSD reveal two dimensions of behavior: one associated with impulsiveness and conduct problems and one associated with the interpersonal and motivational aspects of psychopathy (Frick et al., 1994). These factors have been similarly identified in the behavior of adult psychopaths using the adult Psychopathy Checklist (e.g. Harpur, Hare and Hakstian, 1989). One of the main positions regarding the impairment shared by adult psychopaths is that there is a lack of emotional responsiveness to threatening stimuli (e.g. Lykken, 1957; Hare, 1982; Ogloff and Wong, 1990;Patrick et al., 1993; Patrick et al., 1994). For example, psychopaths have been shown to be deficient in the acquisition of anxiety responses to threatening stimuli (e.g. Lykken, 1957). They have also been found, when anticipating aversive shock, to show smaller electrodermal responses which occur later in the warning interval in comparison to non-psychopaths (e.g. Hare, 1982; Ogloff and Wong, 1990). They have also been found to show reduced autonomic reactivity relative to non-psychopathic controls during the imagery of unpleasant and fearful experiences (Patrick et al., 1994). Individuals with psychopathy have been found to show comparable skin conductance responses to threatening visual stimuli (e.g. picture of a snake) to controls (Patrick et al., 1993).However, their startle reflex responses to the same stimuli are significantly less than those of controls (Patrick et al., 1993). On the basis of these results there have been several suggestions that the psychopathic phenotype is a consequence of a deficit in the neurophysiological systems modulating fear behavior (e.g. Hare, 1978; Gray, 1987; Fowles, 1993; Patrick et al., 1993; Patrick., 1994; Mealey, 1995). An alternative conceptualization assumes that the primary deficit in individuals with psychopathy is a dysfunction within the neuro-cognitive system which mediates the response to distress cues; the Violence Inhibition Mechanism model (Blair, 1995; Blair et al., 1995). In normal developing individuals, the activation of this system by the display of distress cues (sad expressions) is thought to result in autonomic arousal and the interruption⧸inhibition of on-going behavior (Blair, 1995; Blair, Jones, Clark, and Smith, 1997).It should be noted that the Violence Inhibition Mechanism is thought to be activated whenever distress cues are displayed; it is a basic emotion system. It is not reliant on contextual information about on-going violence for activation. In line with this position, the display of distress cues has been found to result in the termination of not only aggression (e.g. Perry and Perry, 1974) but also non-violent disputes over property ownership (e.g. Camras, 1977) and sexual activity (e.g. Chaplin, Rice, and Harris, 1995). The Violence Inhibition Mechanism model suggests that a deficit within, or a failure to develop, this mechanism might, under certain environmental conditions, result in the development of psychopathic behavior; the individual without this mechanism would not inhibit his behavior subsequent to a victim displaying distress cues. This predicts that the psychopath should not show, or should show reduced, arousal responses to distress cues. Four studies have examined the autonomic responsiveness of psychopaths to distress cues (Sutker, 1970;House and Milligan, 1976; Aniskiewicz, 1979; Blair et al., 1997). Three of these studies involved a similar design; subjects had to observe confederates who they thought were being given electric shocks. Skin conductance responses to the sight of the apparently shocked confederates were recorded. Of these three studies, two reported less responsiveness in the psychopath relative to controls (House and Milligan, 1976; Aniskiewicz, 1979) while one did not (Sutker, 1970). More recently, Blair et al., 1997 examined skin conductance responses of psychopaths and matched controls to distress cues, threatening and neutral stimuli. While the psychopaths showed comparable autonomic responses to the controls to the threatening and neutral stimuli, they showed significantly reduced responses to the distress cue stimuli. Only one previous study has investigated the validity of the Violence Inhibition Mechanism for the explanation of children with psychopathic tendencies (Blair, 1997). This study investigated the performance of children with psychopathic tendencies and a control group on the moral⧸ conventional distinction and emotion attribution tasks. This study found, in line with work with adults with Psychopathy, that children with psychopathic tendencies performed more poorly on the moral⧸conventional distinction test and were less likely to attribute the emotions of guilt or remorse. While no studies have specifically looked at the emotional responsiveness of children with psychopathic tendencies, there have been several findings of interest concerning children with conduct disorders. Low resting baseline electrodermal and heartrate responding have been consistently associated with externalizing and criminal behavior (Raine et al., 1990; Fowles, 1993; Lahey et al., 1993) as well as high risk of aggression in boys (Eisenberg et al., 1996). Keltner, Moffitt, and Stouthamer-Loeber (1995) found that externalizing children displayed less embarrassment in a social context than normally developing children. In addition, using a behavioral measure, Eisenberg et al., 1996 found that children with greater behavior problems were less likely to avert their gaze from a film depicting the distress of others.