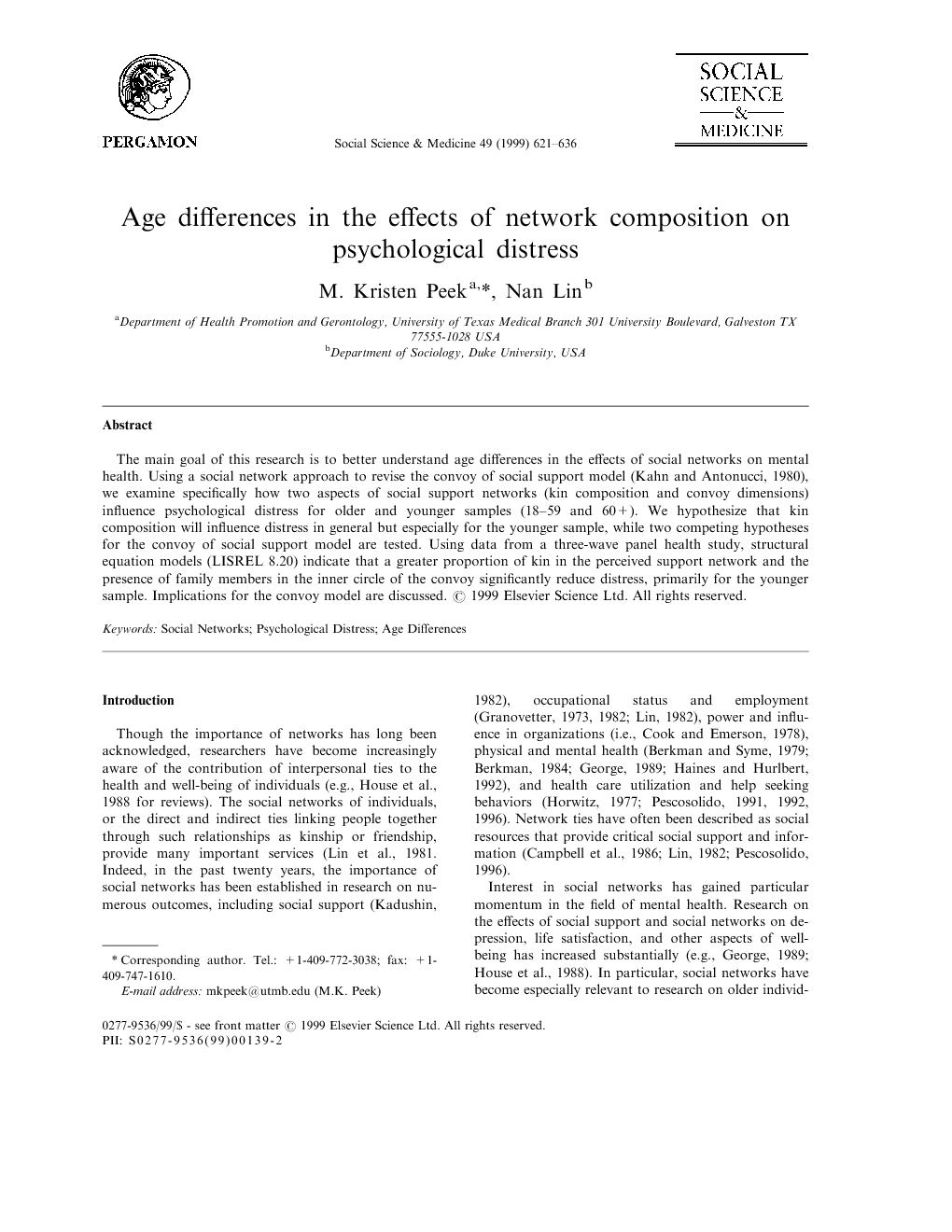 The main goal of this research is to better understand age differences in the effects of social networks on mental health. Using a social network approach to revise the convoy of social support model (Kahn and Antonucci, 1980), we examine specifically how two aspects of social support networks (kin composition and convoy dimensions) influence psychological distress for older and younger samples (18–59 and 60+). We hypothesize that kin composition will influence distress in general but especially for the younger sample, while two competing hypotheses for the convoy of social support model are tested. Using data from a three-wave panel health study, structural equation models (LISREL 8.20) indicate that a greater proportion of kin in the perceived support network and the presence of family members in the inner circle of the convoy significantly reduce distress, primarily for the younger sample. Implications for the convoy model are discussed.

Though the importance of networks has long been acknowledged, researchers have become increasingly aware of the contribution of interpersonal ties to the health and well-being of individuals (e.g., House et al., 1988 for reviews). The social networks of individuals, or the direct and indirect ties linking people together through such relationships as kinship or friendship, provide many important services (Lin et al., 1981. Indeed, in the past twenty years, the importance of social networks has been established in research on numerous outcomes, including social support (Kadushin, 1982), occupational status and employment (Granovetter, 1973, 1982; Lin, 1982), power and influence in organizations (i.e., Cook and Emerson, 1978), physical and mental health (Berkman and Syme, 1979; Berkman, 1984; George, 1989; Haines and Hurlbert, 1992), and health care utilization and help seeking behaviors (Horwitz, 1977; Pescosolido, 1991, 1992, 1996). Network ties have often been described as social resources that provide critical social support and information (Campbell et al., 1986; Lin, 1982; Pescosolido, 1996). Interest in social networks has gained particular momentum in the field of mental health. Research on the effects of social support and social networks on depression, life satisfaction, and other aspects of well-being has increased substantially (e.g., George, 1989; House et al., 1988). In particular, social networks have become especially relevant to research on older individuals. The importance of informal networks in, for example, the provision of care to the aging population has been well-documented (Stoller and Pugliesi, 1991). However, the specific ways in which social networks influence the mental health of older individuals and possible explanations for these effects deserves more attention than received thus far in the research literature. The term ‘social network’ tends to be used interchangeably with ‘social support’ (House et al., 1988) with little attempt to truly differentiate these two diverse concepts. In general, the distinction between social networks and social support is that networks are the structures through which social support, the functional behavior, is provided (Antonucci, 1985). Social support can be conceived as being embedded within the social network and as being one function of the social network (Lin and Ensel, 1989). One important research issue is how to capture both the social network and social support, or the structure and the function, simultaneously. This research focuses on one way in which both network and support features are addressed. We apply the convoy of social support model (Kahn and Antonucci, 1980) to a social network perspective to examine age differences in the effects of network composition on psychological distress.