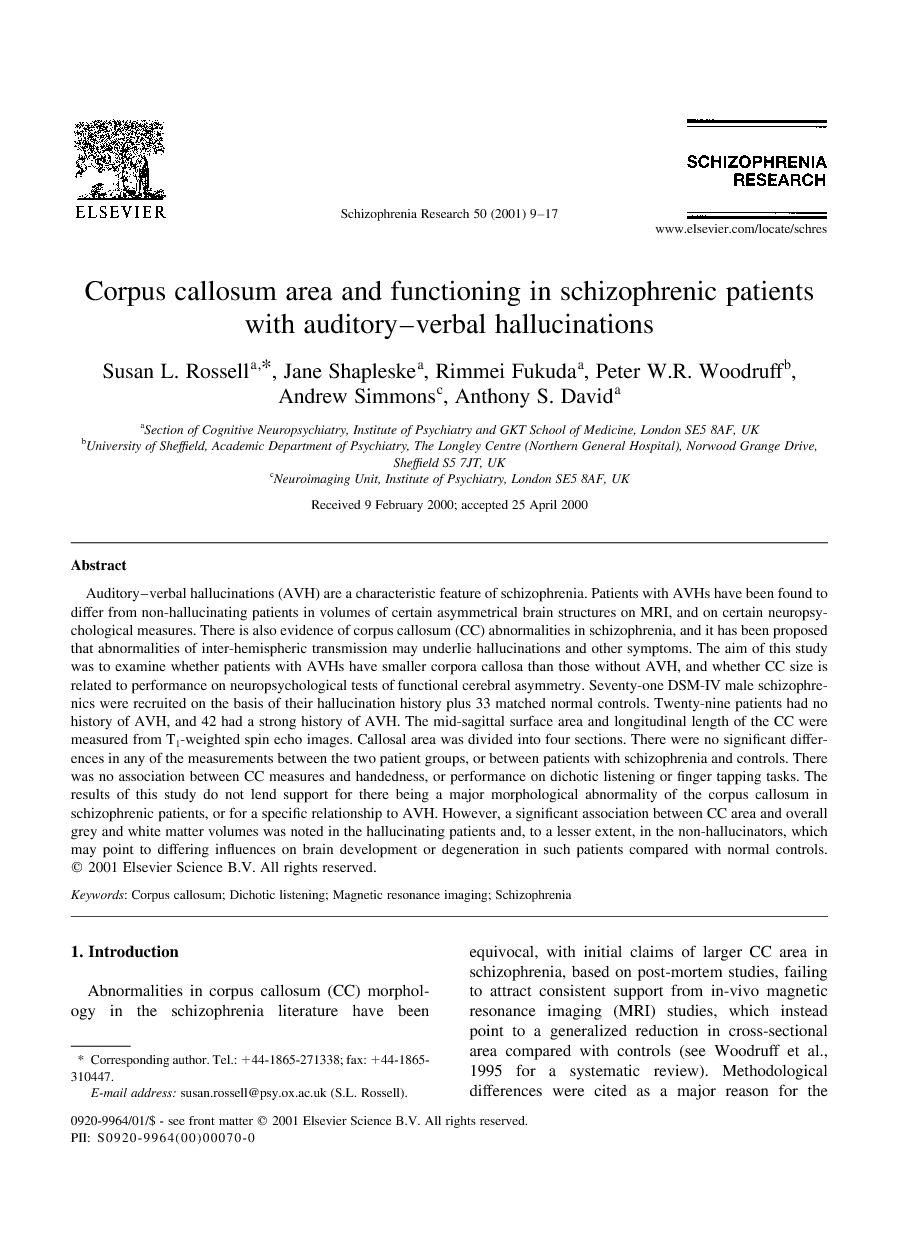 Auditory–verbal hallucinations (AVH) are a characteristic feature of schizophrenia. Patients with AVHs have been found to differ from non-hallucinating patients in volumes of certain asymmetrical brain structures on MRI, and on certain neuropsychological measures. There is also evidence of corpus callosum (CC) abnormalities in schizophrenia, and it has been proposed that abnormalities of inter-hemispheric transmission may underlie hallucinations and other symptoms. The aim of this study was to examine whether patients with AVHs have smaller corpora callosa than those without AVH, and whether CC size is related to performance on neuropsychological tests of functional cerebral asymmetry. Seventy-one DSM-IV male schizophrenics were recruited on the basis of their hallucination history plus 33 matched normal controls. Twenty-nine patients had no history of AVH, and 42 had a strong history of AVH. The mid-sagittal surface area and longitudinal length of the CC were measured from T1-weighted spin echo images. Callosal area was divided into four sections. There were no significant differences in any of the measurements between the two patient groups, or between patients with schizophrenia and controls. There was no association between CC measures and handedness, or performance on dichotic listening or finger tapping tasks. The results of this study do not lend support for there being a major morphological abnormality of the corpus callosum in schizophrenic patients, or for a specific relationship to AVH. However, a significant association between CC area and overall grey and white matter volumes was noted in the hallucinating patients and, to a lesser extent, in the non-hallucinators, which may point to differing influences on brain development or degeneration in such patients compared with normal controls.

Abnormalities in corpus callosum (CC) morphology in the schizophrenia literature have been equivocal, with initial claims of larger CC area in schizophrenia, based on post-mortem studies, failing to attract consistent support from in-vivo magnetic resonance imaging (MRI) studies, which instead point to a generalized reduction in cross-sectional area compared with controls (see Woodruff et al., 1995 for a systematic review). Methodological differences were cited as a major reason for the inconsistencies in the literature. One frequently identified problem within schizophrenia research in general is that the diagnosis covers a heterogeneous range of signs and symptoms and that this might obscure an association between a given biological parameter and a specific deficit, dimension, or in even symptom of the disorder. In relation to CC research, Gunther et al. (1991) found that Type 2 patients (i.e., those with predominately negative symptoms) had smaller CCs than Type 1 patients (those with predominately positive symptoms). This has recently been replicated by Tibbo et al. (1998), who reported that the decrement in CC size was related to the severity of negative symptoms. Taking a symptom lead approach, Woodruff et al. (1993) found a correlation between delusions and regional thinning of the CC. Furthermore, reduction in the cross-sectional area of the isthmus of the CC, the region that connects left and right superior temporal gyri was demonstrated, a finding consistent with the hypothesis that structural abnormalities of the CC and superior temporal lobes share a common pathogenesis. Certain cortical regions, particularly the superior temporal gyrus, have been implicated in the genesis of AVHs. Such evidence comes from both structural (Barta et al., 1990 and Levitan et al., 1999) and functional (David et al., 1996, Dierks et al., 1999, Woodruff et al., 1995 and Woodruff et al., 1997a) MRI research. Hence, it is reasonable to propose that a reduced CC size may be linked, theoretically, to AVHs. Indeed, Nasrallah et al (1986) postulated that abnormal inter-hemispheric connectivity, mediated by the CC, may underlie several Schneiderian first rank symptoms, a view elaborated by David (1994), who proposed a specific relationship between CC size and auditory hallucinations. Neuropsychological studies utilizing the technique of dichotic listening have been applied to hallucinating and non-hallucinating patients. The right ear/left hemisphere advantage on language sensitive dichotic listening tasks, seen in most normal right handers, appears to be attenuated in patients who are hallucination-prone (Bruder et al., 1995, Green et al., 1994 and Levitan et al., 1999) and correlates with symptom severity. This has been taken as evidence for left hemisphere dysfunction but could be interpreted as showing abnormal cerebral symmetry in schizophrenia perhaps as a consequence of increased trans-callosal information transfer (see David, 1993), particularly since there is a direct relationship between cross-sectional area and inter-hemispheric facilitation (Woodruff et al., 1997b). Alternatively, lack of callosal transfer, as in commissurotomy patients, results in an accentuation of the normal right ear advantage on dichotic listening tests (see Zaidel et al., 1995). This study was designed to assess corpus callosum morphology in a large group of male schizophrenic patients who had either a strong positive or negative history of auditory hallucinations. We predicted that the reduced CC area found in schizophrenic patients as a group would be less evident in non-hallucinators. Furthermore, we sought to explore the relationship between CC area and a functional measure of inter-hemispheric transfer and laterality, namely dichotic listening and, for the first time, uni-manual motor skill (i.e., a non-linguistic, non-auditory, lateralized function) in hallucinators and non-hallucinators. Finally, few of the studies reviewed by Woodruff et al. (1995) could comment on whether the reduction on CC area was disproportionate to generalized cerebral atrophy (see Van-Horn and McManus, 1992 and Woodruff et al., 1995). Hence, we set out to examine the relationship between CC area measures and whole-brain grey, white and CSF volumes in schizophrenia patients and controls.