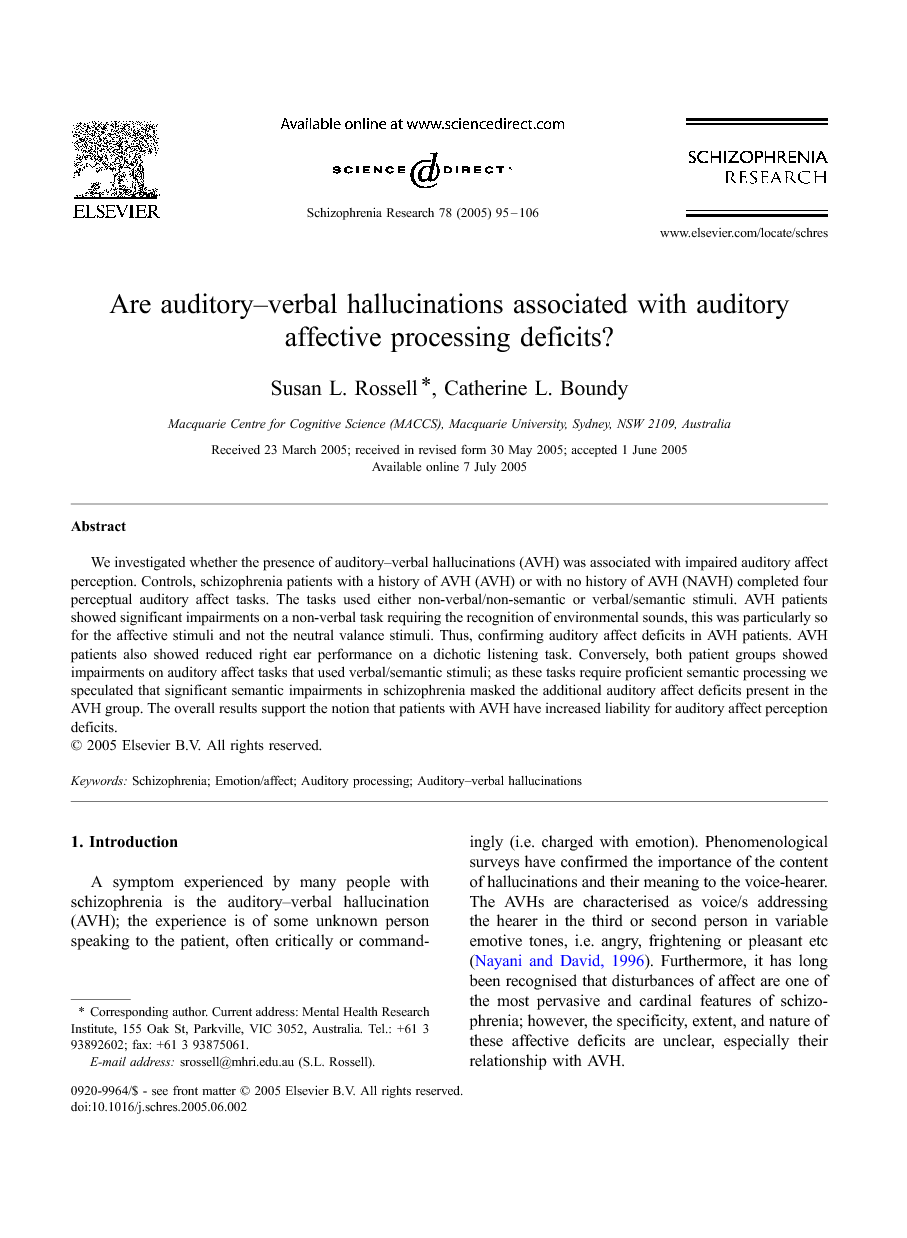 We investigated whether the presence of auditory–verbal hallucinations (AVH) was associated with impaired auditory affect perception. Controls, schizophrenia patients with a history of AVH (AVH) or with no history of AVH (NAVH) completed four perceptual auditory affect tasks. The tasks used either non-verbal/non-semantic or verbal/semantic stimuli. AVH patients showed significant impairments on a non-verbal task requiring the recognition of environmental sounds, this was particularly so for the affective stimuli and not the neutral valance stimuli. Thus, confirming auditory affect deficits in AVH patients. AVH patients also showed reduced right ear performance on a dichotic listening task. Conversely, both patient groups showed impairments on auditory affect tasks that used verbal/semantic stimuli; as these tasks require proficient semantic processing we speculated that significant semantic impairments in schizophrenia masked the additional auditory affect deficits present in the AVH group. The overall results support the notion that patients with AVH have increased liability for auditory affect perception deficits.

A symptom experienced by many people with schizophrenia is the auditory–verbal hallucination (AVH); the experience is of some unknown person speaking to the patient, often critically or commandingly (i.e. charged with emotion). Phenomenological surveys have confirmed the importance of the content of hallucinations and their meaning to the voice-hearer. The AVHs are characterised as voice/s addressing the hearer in the third or second person in variable emotive tones, i.e. angry, frightening or pleasant etc (Nayani and David, 1996). Furthermore, it has long been recognised that disturbances of affect are one of the most pervasive and cardinal features of schizophrenia; however, the specificity, extent, and nature of these affective deficits are unclear, especially their relationship with AVH. There have been relatively few studies examining auditory affect perception in schizophrenia. There is a small literature on verbal affective auditory perception using affective prosody tasks, and no known study using non-verbal auditory affective tasks. Affective prosody is defined as a linguistic/neuropsychological function that encompasses all nonverbal aspects of language that are necessary for recognising and conveying emotions in communication, and reflects the detection of different speech intonations. Edwards et al. (2002) recently published a review of seven affective prosody studies in schizophrenia, concluding that inpatients with chronic schizophrenia do less well than normal controls. There was some suggestion that more errors occur for sad stimuli, although, there is an argument that negative emotions are generally harder to recognise. To date, there has been no empirical evidence of a relationship between affective prosody recognition and the positive and negative symptoms of schizophrenia. Work on affective prosody in patients with schizophrenia has used sentences or words read in different emotions as stimuli (see Edwards et al., 2002). Only one study attempted to control for the meanings of the sentences and presented subjects with sentences devoid of semantic content (Bazhin et al., 1978), i.e. by presenting different speech intonations with no actual words. There is a myriad of research to have shown disordered associative or semantic processes are central to cognitive deficits in patients with schizophrenia (e.g. Elvevåg et al., 2002b, Rossell et al., 1999 and Rossell et al., 2000). It is, therefore, vital that semantic processes are kept to a minimum when studying affect perception. To date, there has been no study to investigate auditory affect perception in patients who experience auditory hallucinations. This dearth is perplexing considering first, AVH are auditory perceptions (probably of misattributed inner speech, Frith and Done, 1988), and are frequently emotive in content. Secondly, there are well-established links with central auditory processing difficulties and AVH (Hoffman et al., 1999, McKay et al., 2000 and Wexler et al., 1991), and last, eminent authors in the field, like Woodruff (2004), have questioned whether emotional aspects of speech are disturbed in individuals predisposed to AVH, and whether such disturbances increase a person's liability to experience AVH. The aim of this research was to complete the first known comprehensive study of auditory affect perception in both verbal/semantic and non-verbal/non-semantic modalities in schizophrenia, and thus to examine whether poor auditory affective processing might be associated with the presence of AVH. This study investigated auditory affective processing using five different tasks. Two of the tasks examined perception of affective prosody using sentences read in a range of affective tones, thus contained verbal/semantic information. The third task examined the perception of non-word sounds, i.e. da, presented in a range of affective tones, thus contained limited semantic information. The forth task examined the perception of sounds presented in a range of affective tones and were non-verbal/non-semantic. The last task examined production of verbal information including some affectively valenced categories. There is a large literature on verbal production deficits in schizophrenia; no study to date has suggested that patients with AVH have poor verbal production. Reduced verbal production is typically found in patients with negative as opposed to positive symptoms of schizophrenia (e.g. Allen and Frith, 1983). Two groups of patients were recruited for the study, those with a history of hallucinations and those with no history, and a group of normal controls. It was predicted that patients with schizophrenia with a history of auditory hallucinations would perform more poorly on the four perception tasks than patients with schizophrenia with no such history of auditory hallucinations. It was further predicted that both groups with schizophrenia compared with normal controls would perform poorly on the verbal production task and on a control facial affect perception task. Consequently, any differences reported between AVH and NAVH groups would be specific to the perception of auditory affective and not found in the language production or visual affect perception domains.