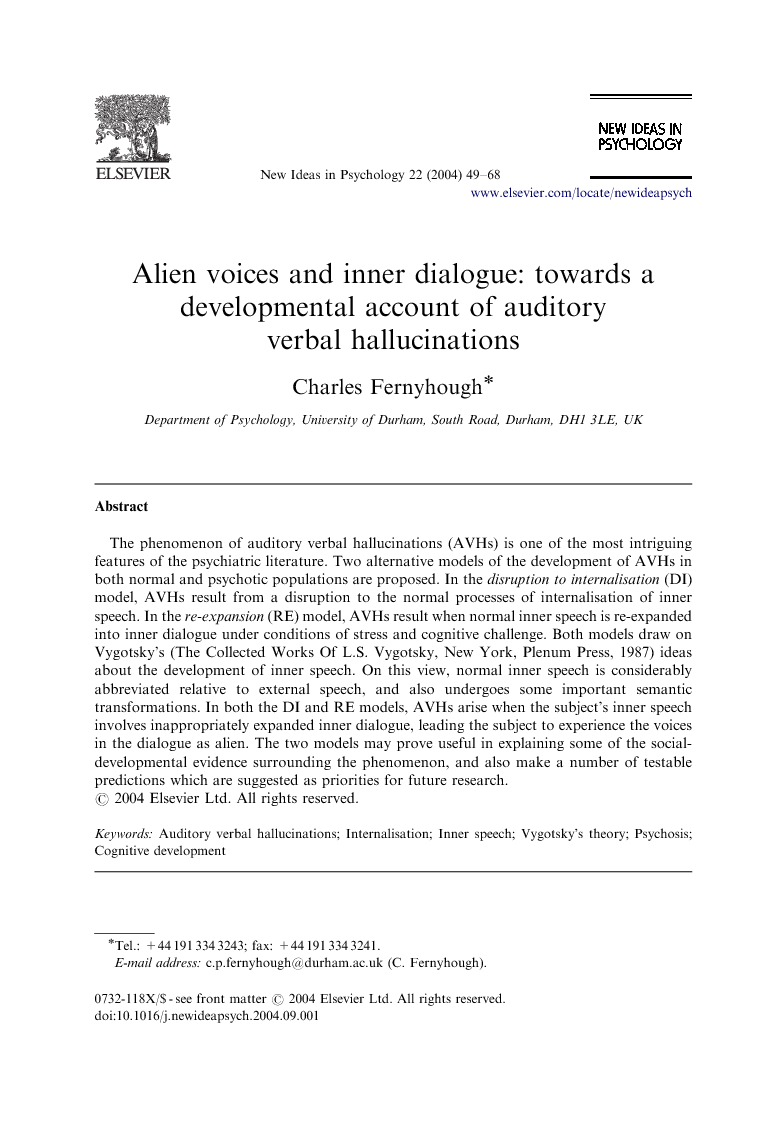 The phenomenon of auditory verbal hallucinations (AVHs) is one of the most intriguing features of the psychiatric literature. Two alternative models of the development of AVHs in both normal and psychotic populations are proposed. In the disruption to internalisation (DI) model, AVHs result from a disruption to the normal processes of internalisation of inner speech. In the re-expansion (RE) model, AVHs result when normal inner speech is re-expanded into inner dialogue under conditions of stress and cognitive challenge. Both models draw on Vygotsky's (The Collected Works Of L.S. Vygotsky, New York, Plenum Press, 1987) ideas about the development of inner speech. On this view, normal inner speech is considerably abbreviated relative to external speech, and also undergoes some important semantic transformations. In both the DI and RE models, AVHs arise when the subject's inner speech involves inappropriately expanded inner dialogue, leading the subject to experience the voices in the dialogue as alien. The two models may prove useful in explaining some of the social-developmental evidence surrounding the phenomenon, and also make a number of testable predictions which are suggested as priorities for future research.

The phenomenon of auditory verbal hallucinations (AVHs), where subjects report the perception of speech in the absence of any external stimulus, has proved to be one of the most consistently puzzling in the psychiatric literature. AVHs are seen as a primary positive symptom of schizophrenia, and were classified by Schneider (1959) as first-rank symptoms. More recently, a number of developments in psychiatry, psychology and neuroscience have contributed to a renewed interest in AVHs. Firstly, the move towards a non-Kraepelinian, symptom-based approach to the psychopathology of schizophrenia (e.g. Bentall (1990) and Bentall (2003); Frith, 1992) has led to a focus on AVHs as a phenomenon worthy of study in its own right, rather than as a feature of a larger explicandum, namely schizophrenia. Secondly, a growing consensus that hallucinations, verbal and otherwise, are not necessarily signs of pathology (Feelgood & Rantzen, 1994; Johns & van Os, 2001; Pearson et al., 2001; Reese, 1971; Tien, 1991) has contributed to a view of AVHs as potentially part of normal as well as abnormal experience. Thirdly, advances in brain-imaging techniques have meant that researchers have been able to study AVHs in vivo, at the very moment that the subject is experiencing them (e.g. Shergill, Brammer, Williams, Murray, & McGuire, 2000). Finally, a degree of success in the psychological modelling of AVHs (e.g. Bentall, 1990; Frith, 1992; Hoffman, 1986) has led to a new optimism that we might be within reach of a psychological-level account of these experiences. This resurgence of interest in the psychological modelling of AVHs comes at a time of growing interest in the linguistic and verbal qualities of normal as well as abnormal consciousness. Ever since James (1890) made his observations on the ongoing interplay of verbal images that characterises human thought, the ‘stream of consciousness’ has been considered a primarily verbal phenomenon. Not only does this view have a considerable amount of intuitive appeal, it has also proved useful for a growing number of psychologists and philosophers (e.g. Carruthers, 2002; Clark, 1998; Dennett, 1997; Kinsbourne, 2000) in explaining how the functional properties of natural language can augment the pre-existing cognitive capacities of the individual. Another factor in the resurgence of interest in inner speech is the growing popularity of Vygotsky's (e.g. 1934/1987) ideas on the phenomenon. On this view, verbal thought develops through the gradual internalisation of external forms of dialogue, with the result that mature inner speech is irreducibly dialogic in character (Fernyhough, 1996; Wertsch, 1991). My aim in this paper is to situate the study of AVHs within the wider context of the study of inner speech, with particular focus on the normal and abnormal development of inner speech. To date, there have been no developmental-psychological accounts of AVHs. This is partly because the phenomenon has traditionally been seen as part of a broader disorder, schizophrenia, which has proved notoriously resistant to developmental explanation. Consequently, AVHs have come to scholars’ attention as a full-blown, adult symptom requiring explanation in terms of organic deficits and resultant cognitive disturbance. The present view, in contrast, is that any satisfactory theory of AVHs must incorporate an account of how these experiences develop, and particularly their relation to normally developing inner speech. My starting point is the Vygotskian view that inner speech is irreducibly dialogic. I take a non-Kraepelinian, dimensional approach to psychosis in general, on which AVHs are viewed as part of normal as well as abnormal experience. Two alternative developmental models, essentially based on Vygotskian ideas about inner speech, are presented. Any developmental account must of course be answerable to developmental data, and, in evaluating the present models with respect to competing accounts of AVHs, I attempt to show how these models can make sense of a growing body of evidence from both normal and abnormal development.