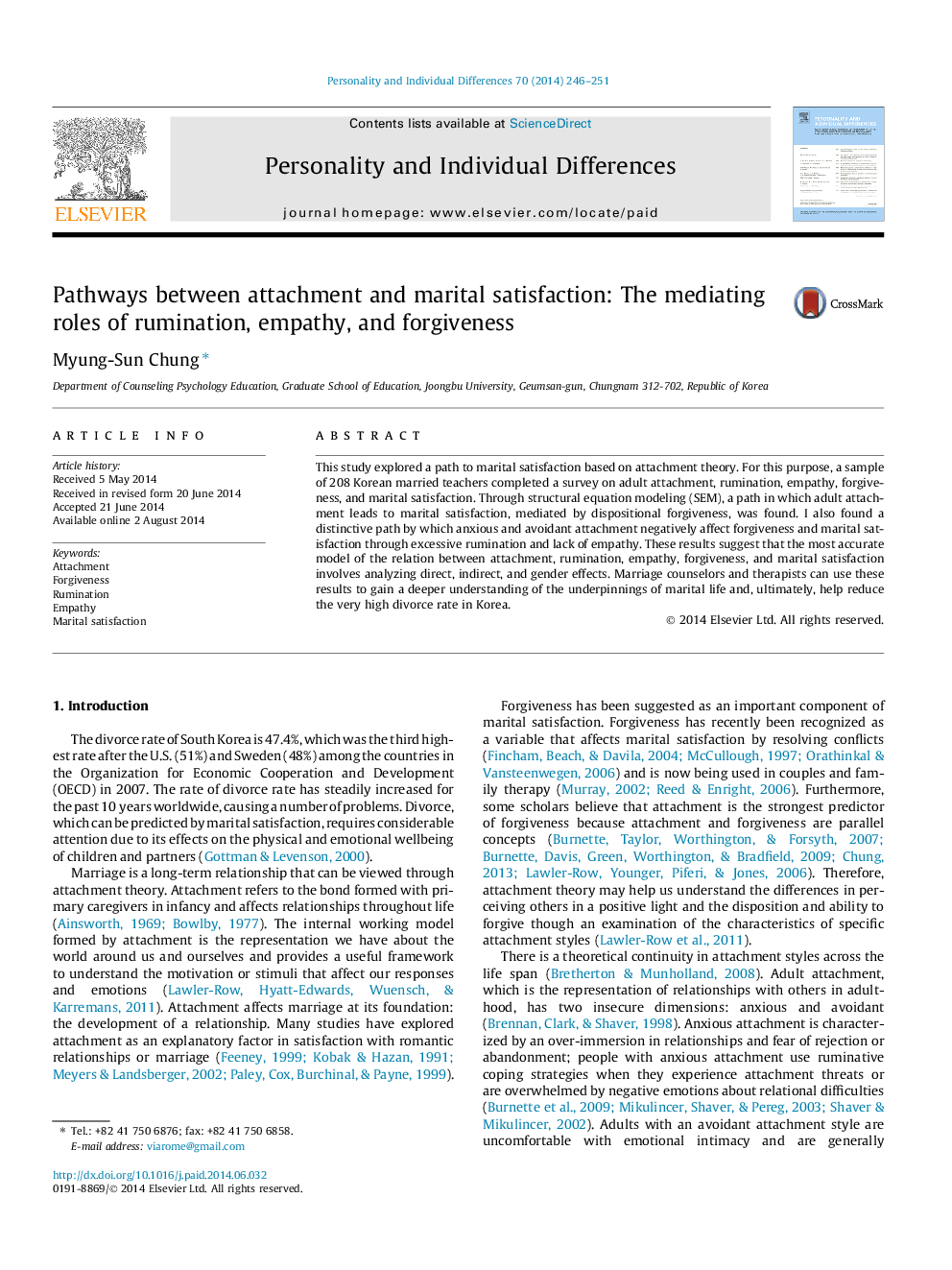 The divorce rate of South Korea is 47.4%, which was the third highest rate after the U.S. (51%) and Sweden (48%) among the countries in the Organization for Economic Cooperation and Development (OECD) in 2007. The rate of divorce rate has steadily increased for the past 10 years worldwide, causing a number of problems. Divorce, which can be predicted by marital satisfaction, requires considerable attention due to its effects on the physical and emotional wellbeing of children and partners (Gottman & Levenson, 2000). Marriage is a long-term relationship that can be viewed through attachment theory. Attachment refers to the bond formed with primary caregivers in infancy and affects relationships throughout life (Ainsworth, 1969 and Bowlby, 1977). The internal working model formed by attachment is the representation we have about the world around us and ourselves and provides a useful framework to understand the motivation or stimuli that affect our responses and emotions (Lawler-Row, Hyatt-Edwards, Wuensch, & Karremans, 2011). Attachment affects marriage at its foundation: the development of a relationship. Many studies have explored attachment as an explanatory factor in satisfaction with romantic relationships or marriage (Feeney, 1999, Kobak and Hazan, 1991, Meyers and Landsberger, 2002 and Paley et al., 1999). Forgiveness has been suggested as an important component of marital satisfaction. Forgiveness has recently been recognized as a variable that affects marital satisfaction by resolving conflicts (Fincham et al., 2004, McCullough, 1997 and Orathinkal and Vansteenwegen, 2006) and is now being used in couples and family therapy (Murray, 2002 and Reed and Enright, 2006). Furthermore, some scholars believe that attachment is the strongest predictor of forgiveness because attachment and forgiveness are parallel concepts (Burnette et al., 2007, Burnette et al., 2009, Chung, 2013 and Lawler-Row et al., 2006). Therefore, attachment theory may help us understand the differences in perceiving others in a positive light and the disposition and ability to forgive though an examination of the characteristics of specific attachment styles (Lawler-Row et al., 2011). There is a theoretical continuity in attachment styles across the life span (Bretherton & Munholland, 2008). Adult attachment, which is the representation of relationships with others in adulthood, has two insecure dimensions: anxious and avoidant (Brennan, Clark, & Shaver, 1998). Anxious attachment is characterized by an over-immersion in relationships and fear of rejection or abandonment; people with anxious attachment use ruminative coping strategies when they experience attachment threats or are overwhelmed by negative emotions about relational difficulties (Burnette et al., 2009, Mikulincer et al., 2003 and Shaver and Mikulincer, 2002). Adults with an avoidant attachment style are uncomfortable with emotional intimacy and are generally uncomfortable in a relationship or coping with emotions (Slade, 1999). They exhibit a lack of empathy from suppressing their own emotions and seeking to distance themselves from others to avoid the frustration caused by failures in acquiring support and help from others (Burnette et al., 2009 and Shaver and Mikulincer, 2002). From an evolutionary perspective, the fact that people still tend to respond with retaliation or revenge rather than forgiveness (Burnette et al., 2009 and McCullough, 2008), despite increasing evidence of the importance of forgiveness, can be seen as an inadequacy of emotion regulation reflected by attachment insecurities (anxiety and avoidance). Bradbury, Fincham, and Beach (2000) pointed out the importance of emotion regulation while reviewing the determinants of marital satisfaction. Emotion regulation in the context of relationships with others requires empathy—being able to infer others’ emotional states—which is closely associated with attachment formation in early childhood (Chung, 2012) and has received attention as the proximal determinant of forgiveness and marital satisfaction (Fincham et al., 2002, McCullough et al., 1998 and Paleari et al., 2005). In addition, rumination—the representative mechanism of negative emotion regulation—contributes to predicting forgiveness in close relationships (Burnette et al., 2007, McCullough et al., 1998 and Paleari et al., 2005). Both rumination and lack of empathy have been shown to cause a variety of relational problems and obstruct pro-social behavior and motivation (Chung, 2013, Hoffman, 1981 and McCullough et al., 1998); hence, direct and indirect associations of rumination and lack of empathy with forgiveness and marital satisfaction can be inferred. Therefore, this study explored the associations between attachment, rumination, empathy, forgiveness, and marital satisfaction based on attachment theory in a sample of married Korean adults. I postulated that the relationship between insecure attachment and reduced forgiveness would affect the satisfaction of married adults through excessive rumination and lack of empathy. In addition, I verified the model invariance across gender for the hypothesized model.