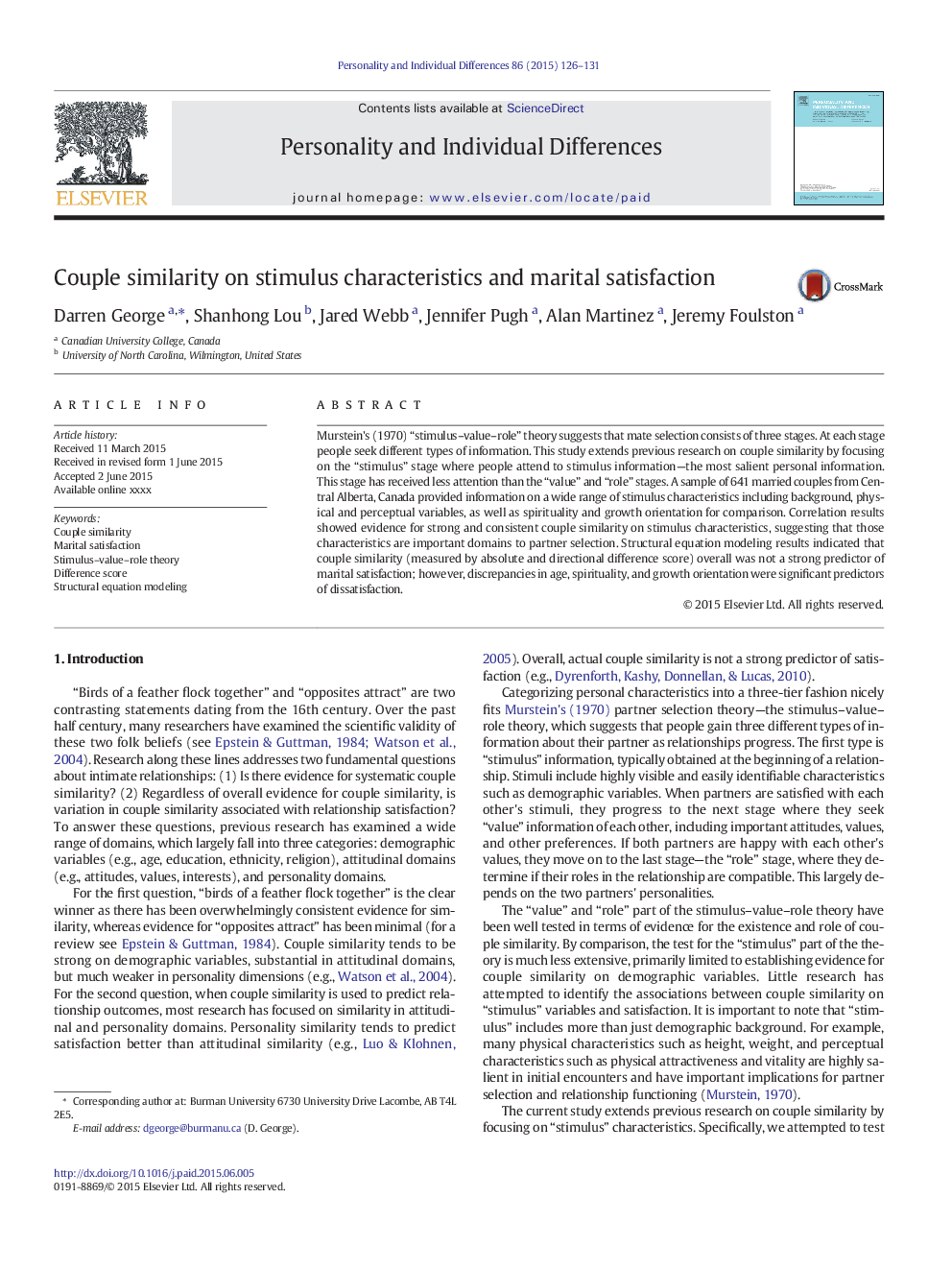 • A sample of 641 married couples from Central Alberta tested the influence of stimulus factors on marital satisfaction.• Stimulus characteristics of married couples are highly correlated and often predictive of marital success.• Discrepancies in age, spirituality, and growth orientation significantly predict dissatisfaction.• Structural equation modeling explores the varied influence of direction and non-directional differences between couples.Murstein's (1970) “stimulus–value–role” theory suggests that mate selection consists of three stages. At each stage people seek different types of information. This study extends previous research on couple similarity by focusing on the “stimulus” stage where people attend to stimulus information—the most salient personal information. This stage has received less attention than the “value” and “role” stages. A sample of 641 married couples from Central Alberta, Canada provided information on a wide range of stimulus characteristics including background, physical and perceptual variables, as well as spirituality and growth orientation for comparison. Correlation results showed evidence for strong and consistent couple similarity on stimulus characteristics, suggesting that those characteristics are important domains to partner selection. Structural equation modeling results indicated that couple similarity (measured by absolute and directional difference score) overall was not a strong predictor of marital satisfaction; however, discrepancies in age, spirituality, and growth orientation were significant predictors of dissatisfaction.

“Birds of a feather flock together” and “opposites attract” are two contrasting statements dating from the 16th century. Over the past half century, many researchers have examined the scientific validity of these two folk beliefs (see Epstein and Guttman, 1984 and Watson et al., 2004). Research along these lines addresses two fundamental questions about intimate relationships: (1) Is there evidence for systematic couple similarity? (2) Regardless of overall evidence for couple similarity, is variation in couple similarity associated with relationship satisfaction? To answer these questions, previous research has examined a wide range of domains, which largely fall into three categories: demographic variables (e.g., age, education, ethnicity, religion), attitudinal domains (e.g., attitudes, values, interests), and personality domains. For the first question, “birds of a feather flock together” is the clear winner as there has been overwhelmingly consistent evidence for similarity, whereas evidence for “opposites attract” has been minimal (for a review see Epstein & Guttman, 1984). Couple similarity tends to be strong on demographic variables, substantial in attitudinal domains, but much weaker in personality dimensions (e.g., Watson et al., 2004). For the second question, when couple similarity is used to predict relationship outcomes, most research has focused on similarity in attitudinal and personality domains. Personality similarity tends to predict satisfaction better than attitudinal similarity (e.g., Luo & Klohnen, 2005). Overall, actual couple similarity is not a strong predictor of satisfaction (e.g., Dyrenforth, Kashy, Donnellan, & Lucas, 2010). Categorizing personal characteristics into a three-tier fashion nicely fits Murstein's (1970) partner selection theory—the stimulus–value–role theory, which suggests that people gain three different types of information about their partner as relationships progress. The first type is “stimulus” information, typically obtained at the beginning of a relationship. Stimuli include highly visible and easily identifiable characteristics such as demographic variables. When partners are satisfied with each other's stimuli, they progress to the next stage where they seek “value” information of each other, including important attitudes, values, and other preferences. If both partners are happy with each other's values, they move on to the last stage—the “role” stage, where they determine if their roles in the relationship are compatible. This largely depends on the two partners' personalities. The “value” and “role” part of the stimulus–value–role theory have been well tested in terms of evidence for the existence and role of couple similarity. By comparison, the test for the “stimulus” part of the theory is much less extensive, primarily limited to establishing evidence for couple similarity on demographic variables. Little research has attempted to identify the associations between couple similarity on “stimulus” variables and satisfaction. It is important to note that “stimulus” includes more than just demographic background. For example, many physical characteristics such as height, weight, and perceptual characteristics such as physical attractiveness and vitality are highly salient in initial encounters and have important implications for partner selection and relationship functioning (Murstein, 1970). The current study extends previous research on couple similarity by focusing on “stimulus” characteristics. Specifically, we attempted to test (1) to what degree couples are similar on “stimulus” characteristics and (2) whether variation in couple similarity in “stimulus” predicts marital satisfaction. We examined a comprehensive list of “stimulus” variables and grouped them into three categories for simplicity: background characteristics (i.e., education, ethnicity, denomination), physical characteristics (i.e., age, age at marriage, height, weight, body mass index [BMI], physical exercise), and perceptual characteristics (i.e., physical attractiveness, health/vitality). We also included two personal attributes—spirituality (a “value” item) and growth orientation (a “role” item), which are disclosed early in the relationship and would provide a nice comparison to stimulus variables.