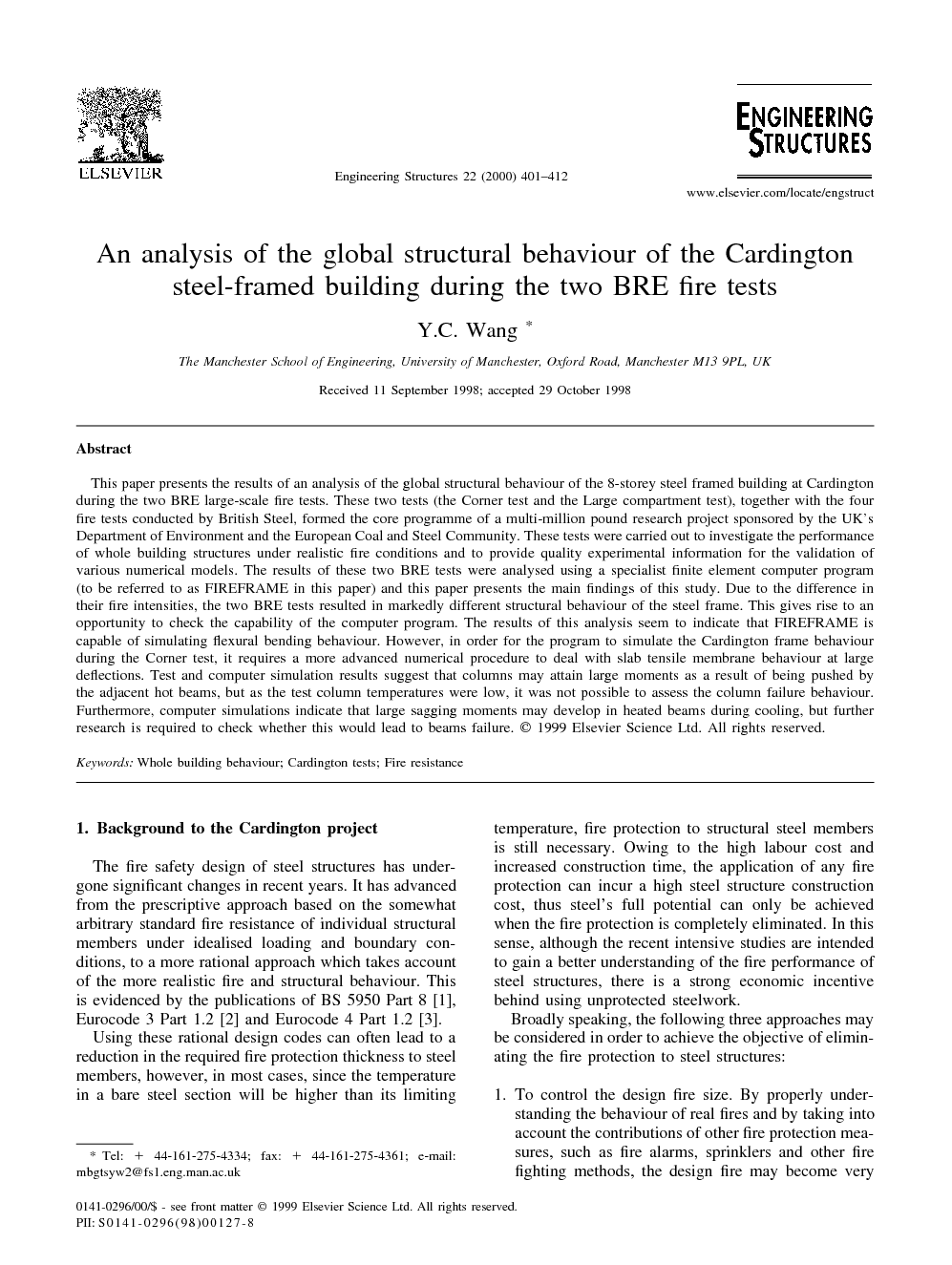 This paper presents the results of an analysis of the global structural behaviour of the 8-storey steel framed building at Cardington during the two BRE large-scale fire tests. These two tests (the Corner test and the Large compartment test), together with the four fire tests conducted by British Steel, formed the core programme of a multi-million pound research project sponsored by the UK's Department of Environment and the European Coal and Steel Community. These tests were carried out to investigate the performance of whole building structures under realistic fire conditions and to provide quality experimental information for the validation of various numerical models. The results of these two BRE tests were analysed using a specialist finite element computer program (to be referred to as FIREFRAME in this paper) and this paper presents the main findings of this study. Due to the difference in their fire intensities, the two BRE tests resulted in markedly different structural behaviour of the steel frame. This gives rise to an opportunity to check the capability of the computer program. The results of this analysis seem to indicate that FIREFRAME is capable of simulating flexural bending behaviour. However, in order for the program to simulate the Cardington frame behaviour during the Corner test, it requires a more advanced numerical procedure to deal with slab tensile membrane behaviour at large deflections. Test and computer simulation results suggest that columns may attain large moments as a result of being pushed by the adjacent hot beams, but as the test column temperatures were low, it was not possible to assess the column failure behaviour. Furthermore, computer simulations indicate that large sagging moments may develop in heated beams during cooling, but further research is required to check whether this would lead to beams failure.

The fire safety design of steel structures has undergone significant changes in recent years. It has advanced from the prescriptive approach based on the somewhat arbitrary standard fire resistance of individual structural members under idealised loading and boundary conditions, to a more rational approach which takes account of the more realistic fire and structural behaviour. This is evidenced by the publications of BS 5950 Part 8 [1], Eurocode 3 Part 1.2 [2]and Eurocode 4 Part 1.2 [3]. Using these rational design codes can often lead to a reduction in the required fire protection thickness to steel members, however, in most cases, since the temperature in a bare steel section will be higher than its limiting temperature, fire protection to structural steel members is still necessary. Owing to the high labour cost and increased construction time, the application of any fire protection can incur a high steel structure construction cost, thus steel's full potential can only be achieved when the fire protection is completely eliminated. In this sense, although the recent intensive studies are intended to gain a better understanding of the fire performance of steel structures, there is a strong economic incentive behind using unprotected steelwork. Broadly speaking, the following three approaches may be considered in order to achieve the objective of eliminating the fire protection to steel structures: 1. To control the design fire size. By properly understanding the behaviour of real fires and by taking into account the contributions of other fire protection measures, such as fire alarms, sprinklers and other fire fighting methods, the design fire may become very small and the resulting damage to the unprotected steel structural members minimal. This forms part of the so-called “Natural Fire Safety Concept” [4]. 2. To integrate the structural loadbearing and fire protection functions. In the traditional way of design, building and then fire protection of steel structures, fire protection is generally regarded as an extra finish whose function is purely to provide fire insulation to the steelwork. Recent development work on steel structural members has seen the integration of structural loadbearing and fire protection functions of concrete, in different forms of innovative steel-concrete composite construction. The paper by Bailey and Newman [5]summarises a number of practical approaches to achieve the required fire resistance using these innovative products. 3. To utilise the whole building structural behaviour. Up to now, the design of steel structures for fire safety is generally based on the assessment of individual structural members, i.e. each structural member should achieve the required fire resistance. However, it should be realised that for a building structure to remain stable under fire conditions, serving the principal need of containing a fire and preventing its spread, it is not absolutely necessary for every individual structural member to remain stable. Fire protection may be eliminated in some steel members if, in the absence of these members, an alternative load path can be provided with other undamaged structural members. To benefit from the better fire performance of a complete building structure, it is necessary to gain a sound understanding of the whole structural fire behaviour. This paper is related to the third approach. The good whole building behaviour under fire conditions has been recognised for some time. It was emphatically confirmed by a fire accident that occurred in an unprotected and partly completed 14-storey steel framed office block at the Broadgate development in London [6]. Although this fire accident could not provide much quantitative information about the whole building structural behaviour, it was influential in the decision to carry out full scale fire tests in complete steel framed building structures 7 and 8, and this led to the studies reported in this paper. In total, six compartment fire tests were completed, two by the Building Research Establishment and four by British Steel. The completion of these tests is now followed by extensive analysis of the test results by various organisations using different computer programs to study the various aspects of the whole building fire performance 9, 10, 11, 12 and 13. These analytical studies are being carried out with two principal objectives: firstly, to check and improve the capability of the different numerical models, and secondly, to use the validated numerical models to conduct parametric studies to provide data for the development of improved design guidance. This paper presents the results of the author's analysis of the global structural behaviour using the computer program FIREFRAME [9].

This paper presented an overview of the two BRE large scale fire tests in the 8-storey steel framed building at Cardington, and some results of an analysis of these tests using a finite element computer program developed by the author [9]. The Cardington tests provided a unique opportunity to study the behaviour of a complete building structure under realistic fire conditions. The test results are still being intensively analysed by a number of researchers, thus it is not possible to draw a comprehensive list of conclusions at this stage. This paper presents the results of the author's analysis and the following tentative conclusions may be drawn: 1. During the Corner test, the Cardington steel building structure exhibited a large deflection behaviour that could not be modelled by pure flexural bending. It is concluded that numerical procedures capable of dealing with membrane action in the floor slabs at large deflections should be included. 2. Large additional bending moments may generate in columns as a result of being pushed by the adjacent hot beam's thermal expansion. However, it is not clear whether this effect would still be present when the column approaches failure in fires. 3. Members regarded as non-loadbearing at the ambient temperature condition may contribute to the fire resistance of primary loadbearing members. This benefit may be taken advantage of in the fire safety design of the concerned primary loadbearing member. 4. Large sagging bending moments (exceeding the initial value) may develop when a hot beam cools down. However, it is not clear whether this may result in beam failure during cooling.