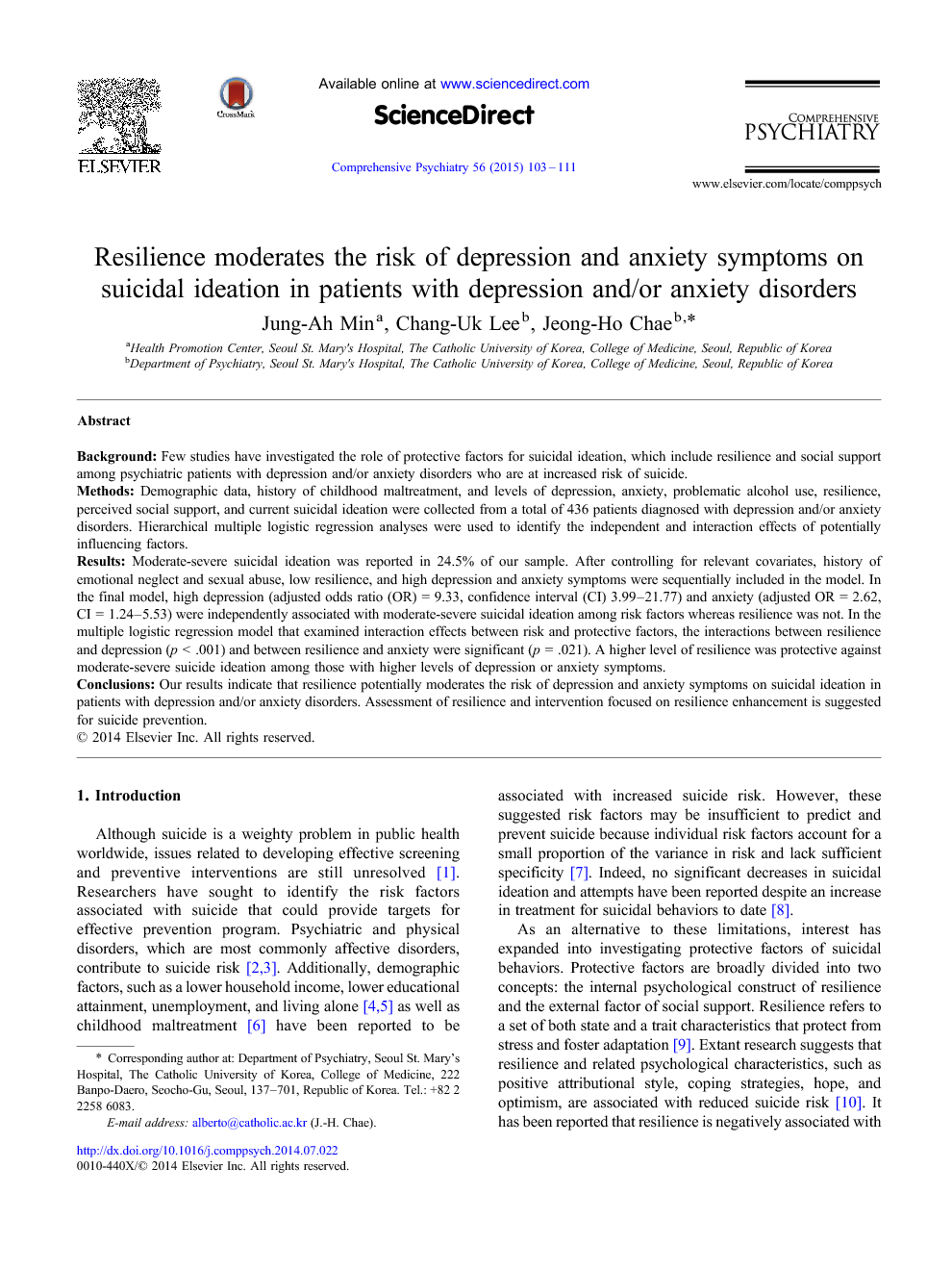 Although suicide is a weighty problem in public health worldwide, issues related to developing effective screening and preventive interventions are still unresolved [1]. Researchers have sought to identify the risk factors associated with suicide that could provide targets for effective prevention program. Psychiatric and physical disorders, which are most commonly affective disorders, contribute to suicide risk [2] and [3]. Additionally, demographic factors, such as a lower household income, lower educational attainment, unemployment, and living alone [4] and [5] as well as childhood maltreatment [6] have been reported to be associated with increased suicide risk. However, these suggested risk factors may be insufficient to predict and prevent suicide because individual risk factors account for a small proportion of the variance in risk and lack sufficient specificity [7]. Indeed, no significant decreases in suicidal ideation and attempts have been reported despite an increase in treatment for suicidal behaviors to date [8]. As an alternative to these limitations, interest has expanded into investigating protective factors of suicidal behaviors. Protective factors are broadly divided into two concepts: the internal psychological construct of resilience and the external factor of social support. Resilience refers to a set of both state and a trait characteristics that protect from stress and foster adaptation [9]. Extant research suggests that resilience and related psychological characteristics, such as positive attributional style, coping strategies, hope, and optimism, are associated with reduced suicide risk [10]. It has been reported that resilience is negatively associated with suicidal ideation [11], [12], [13], [14] and [15] and suicide attempts [13], [16] and [17]. This negative association remained after controlling for traumatic life events of combat exposure [18] and history of childhood trauma [19]. In addition, greater social support, perceived social support in particular, has been shown to be related to low levels of suicidal ideation [20], [21] and [22] and attempts [23]. Therefore, resilience and perceived social support may constitute potential protective factors of suicidal behaviors. However, there are some caveats from previous studies that examined protective factors for suicide that need to be duly considered. Since protective factors are regarded as more than just the absence of risk factors [9], independent effects of protective factors need to be examined after controlling for risk factors. Moreover, risk factors often cannot be eliminated by intervention, and the moderation effect of protective factors on suicide risk, which is an interaction effect, should be also investigated in addition to negative association [10]. Few previous studies have demonstrated the moderating roles of resilience [17] and social support [24] and [25] on suicide risk factors to date. In addition, preventive effects of protective factors might vary between different samples. Earlier studies investigating the roles of resilience and social support on suicidal behaviors have been performed mainly in non-clinical samples comprising students or community-dwelling individuals [10]. In studies among clinical populations, subjects have been limited to abstinent substance abusers [16] and [19], those with schizophrenia-spectrum disorders [26], and patients in primary care service [12] and [20]. Although depression and anxiety disorders have been proposed as the most common psychiatric disorders that are associated with suicidal behaviors [2], studies regarding the protective factors of suicide in patients with these disorders are few, except for studies with inpatients older than 50 years of age with a mood disorder [23] and in adolescents with depression [17]. Therefore, further studies are required in various populations. Based on this background, we attempted to examine the roles of resilience and social support in predicting moderate-severe suicidal ideation among outpatients with depression and/or anxiety disorders. As an outcome variable, suicidal ideation was chosen because it has been shown to be a key indicator of future suicide attempts in a continuum model of suicide and thus, suicide prevention has been focused on this stage [27]. To identify the independent and interaction effects of resilience and social support, multivariate logistic regression models were used after controlling for suggested risk factors for suicide including demographic and clinical variables, childhood maltreatment, and various psychiatric symptoms.