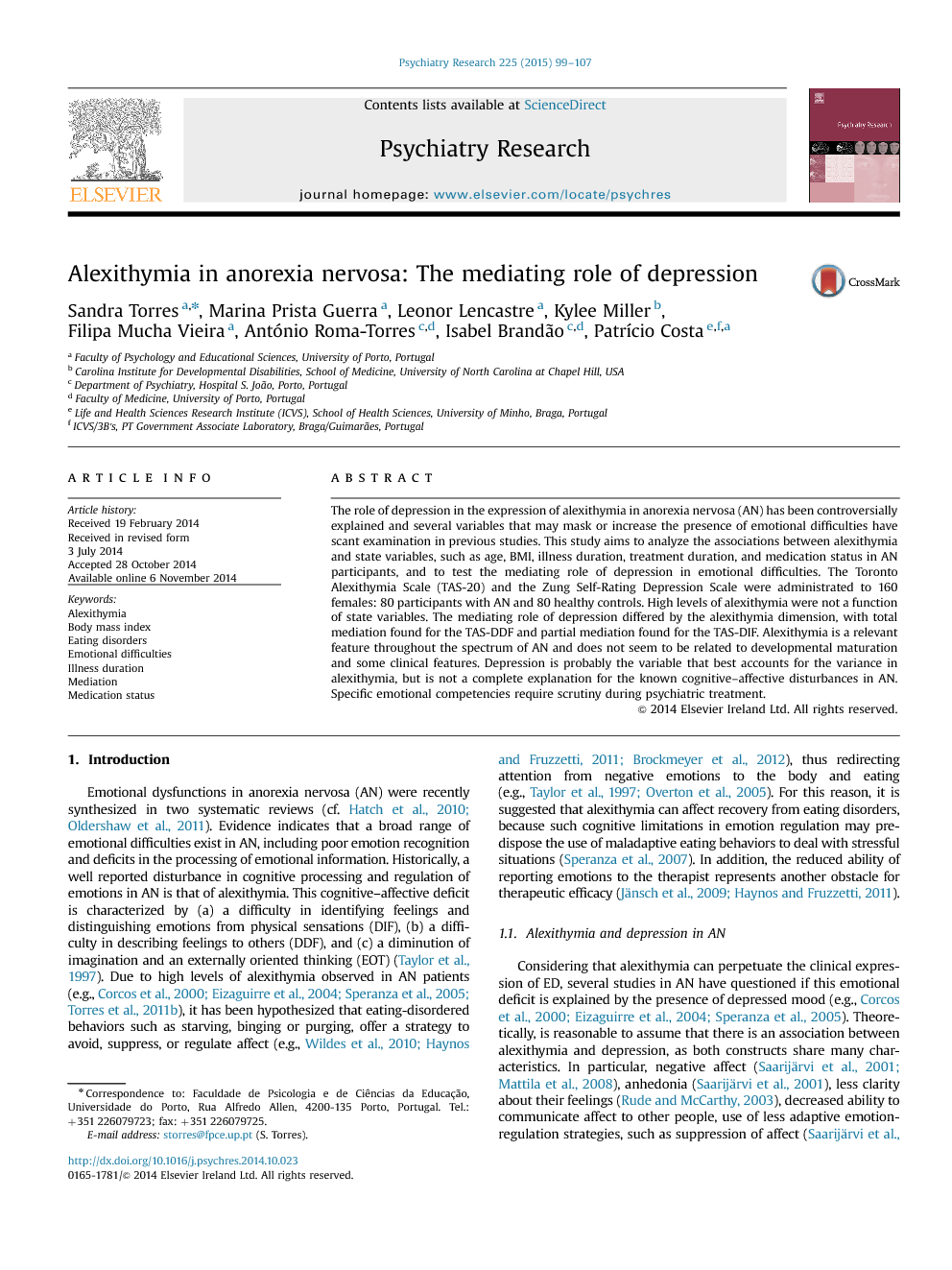 The role of depression in the expression of alexithymia in anorexia nervosa (AN) has been controversially explained and several variables that may mask or increase the presence of emotional difficulties have scant examination in previous studies. This study aims to analyze the associations between alexithymia and state variables, such as age, BMI, illness duration, treatment duration, and medication status in AN participants, and to test the mediating role of depression in emotional difficulties. The Toronto Alexithymia Scale (TAS-20) and the Zung Self-Rating Depression Scale were administrated to 160 females: 80 participants with AN and 80 healthy controls. High levels of alexithymia were not a function of state variables. The mediating role of depression differed by the alexithymia dimension, with total mediation found for the TAS-DDF and partial mediation found for the TAS-DIF. Alexithymia is a relevant feature throughout the spectrum of AN and does not seem to be related to developmental maturation and some clinical features. Depression is probably the variable that best accounts for the variance in alexithymia, but is not a complete explanation for the known cognitive–affective disturbances in AN. Specific emotional competencies require scrutiny during psychiatric treatment.

Emotional dysfunctions in anorexia nervosa (AN) were recently synthesized in two systematic reviews (cf. Hatch et al., 2010 and Oldershaw et al., 2011). Evidence indicates that a broad range of emotional difficulties exist in AN, including poor emotion recognition and deficits in the processing of emotional information. Historically, a well reported disturbance in cognitive processing and regulation of emotions in AN is that of alexithymia. This cognitive–affective deficit is characterized by (a) a difficulty in identifying feelings and distinguishing emotions from physical sensations (DIF), (b) a difficulty in describing feelings to others (DDF), and (c) a diminution of imagination and an externally oriented thinking (EOT) (Taylor et al., 1997). Due to high levels of alexithymia observed in AN patients (e.g., Corcos et al., 2000, Eizaguirre et al., 2004, Speranza et al., 2005 and Torres et al., 2011b), it has been hypothesized that eating-disordered behaviors such as starving, binging or purging, offer a strategy to avoid, suppress, or regulate affect (e.g., Wildes et al., 2010, Haynos and Fruzzetti, 2011 and Brockmeyer et al., 2012), thus redirecting attention from negative emotions to the body and eating (e.g., Taylor et al., 1997 and Overton et al., 2005). For this reason, it is suggested that alexithymia can affect recovery from eating disorders, because such cognitive limitations in emotion regulation may predispose the use of maladaptive eating behaviors to deal with stressful situations (Speranza et al., 2007). In addition, the reduced ability of reporting emotions to the therapist represents another obstacle for therapeutic efficacy (Jänsch et al., 2009 and Haynos and Fruzzetti, 2011).

Table 1 provides results from the total scores of self-report measures (TAS-20 and SDS), BMI, and age in the three diagnostic groups (AN-R, AN-B, and HC). Self-reported levels of alexithymia, F(2, 157)=30.66, p<0.001, η2=0.28, and depression, F(2, 157)=41.92, p<0.001, η2=0.35, differed significantly between the groups. Post-hoc analyses demonstrated that in both alexithymia and depression measures the AN-R and AN-B groups did not differ significantly from each other, but both had significantly higher scores than the HC group. As expected, the BMI was lower in the AN-R and AN-B groups, compared to the HC group. Age was the only variable that reached a statistically significant difference between the two AN groups, despite a small effect.