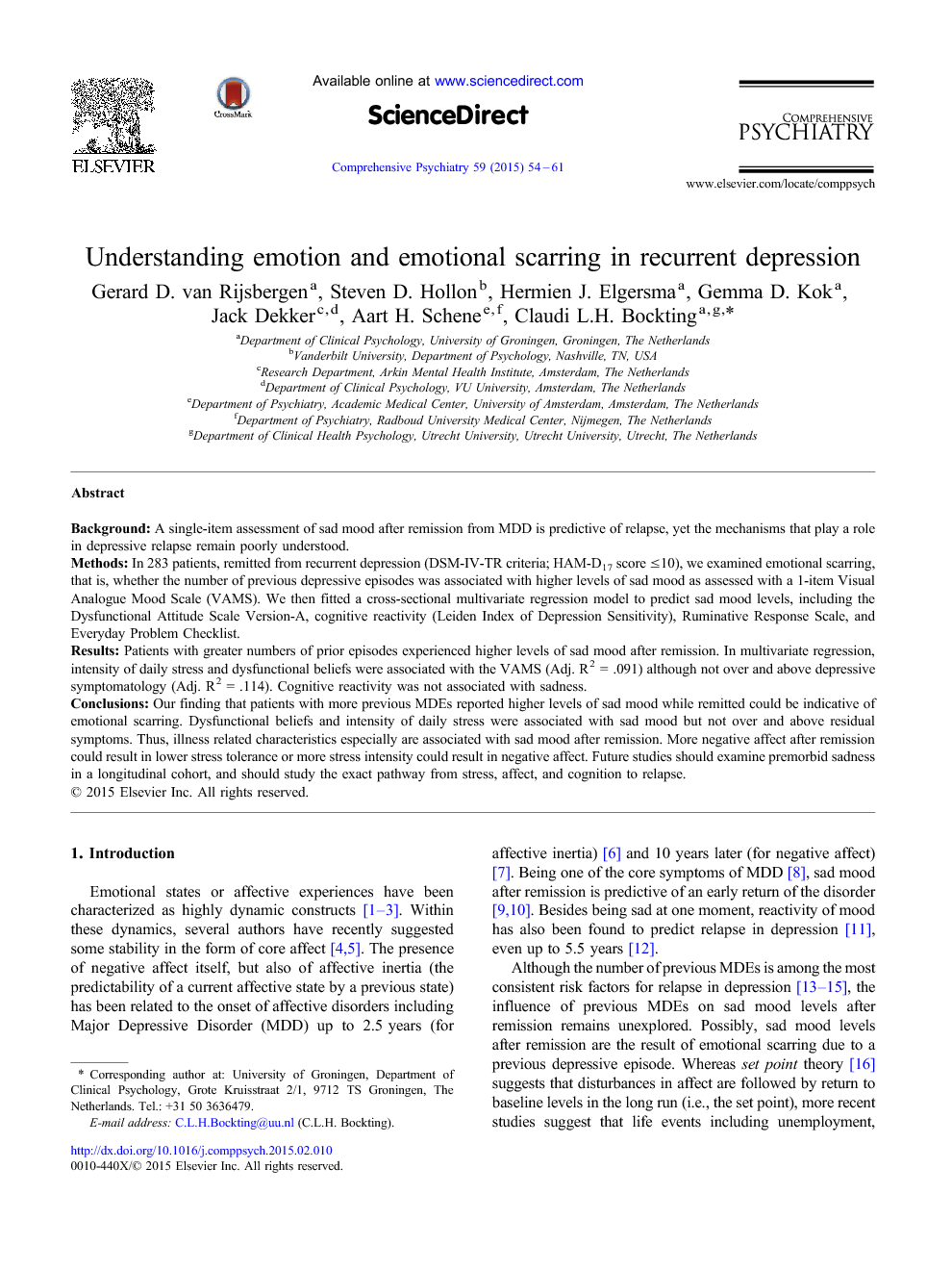 Background A single-item assessment of sad mood after remission from MDD is predictive of relapse, yet the mechanisms that play a role in depressive relapse remain poorly understood. Methods In 283 patients, remitted from recurrent depression (DSM-IV-TR criteria; HAM-D17 score ≤10), we examined emotional scarring, that is, whether the number of previous depressive episodes was associated with higher levels of sad mood as assessed with a 1-item Visual Analogue Mood Scale (VAMS). We then fitted a cross-sectional multivariate regression model to predict sad mood levels, including the Dysfunctional Attitude Scale Version-A, cognitive reactivity (Leiden Index of Depression Sensitivity), Ruminative Response Scale, and Everyday Problem Checklist. Results Patients with greater numbers of prior episodes experienced higher levels of sad mood after remission. In multivariate regression, intensity of daily stress and dysfunctional beliefs were associated with the VAMS (Adj. R2 = .091) although not over and above depressive symptomatology (Adj. R2 = .114). Cognitive reactivity was not associated with sadness. Conclusions Our finding that patients with more previous MDEs reported higher levels of sad mood while remitted could be indicative of emotional scarring. Dysfunctional beliefs and intensity of daily stress were associated with sad mood but not over and above residual symptoms. Thus, illness related characteristics especially are associated with sad mood after remission. More negative affect after remission could result in lower stress tolerance or more stress intensity could result in negative affect. Future studies should examine premorbid sadness in a longitudinal cohort, and should study the exact pathway from stress, affect, and cognition to relapse.

Emotional states or affective experiences have been characterized as highly dynamic constructs [1], [2] and [3]. Within these dynamics, several authors have recently suggested some stability in the form of core affect [4] and [5]. The presence of negative affect itself, but also of affective inertia (the predictability of a current affective state by a previous state) has been related to the onset of affective disorders including Major Depressive Disorder (MDD) up to 2.5 years (for affective inertia) [6] and 10 years later (for negative affect) [7]. Being one of the core symptoms of MDD [8], sad mood after remission is predictive of an early return of the disorder [9] and [10]. Besides being sad at one moment, reactivity of mood has also been found to predict relapse in depression [11], even up to 5.5 years [12]. Although the number of previous MDEs is among the most consistent risk factors for relapse in depression [13], [14] and [15], the influence of previous MDEs on sad mood levels after remission remains unexplored. Possibly, sad mood levels after remission are the result of emotional scarring due to a previous depressive episode. Whereas set point theory [16] suggests that disturbances in affect are followed by return to baseline levels in the long run (i.e., the set point), more recent studies suggest that life events including unemployment, divorce, and widowhood lead to a new equilibrium instead [17] and [18]. In one study, the affective set point was not yet reached up to eight years post-event [17]. These new set points potentially reflect an emotional scar as a result of prolonged exposure to stress or negative affect, similar to what occurs in MDD. Alternatively, patients with higher levels of sad mood before the onset of the first episode might have a poor prognosis for the course of depression. The current study will be among the first to examine the association between sad mood and the number of previous depressive episodes. Given the importance of monitoring sad mood after remission from MDD to detect relapse, we have recently focused on the assessment of sad mood using a single-item Visual Analogue Mood Scale (VAMS). In these studies we demonstrated that a VAMS was a predictor of time to relapse. Each centimeter increase in sad mood as indicated by the patient on the VAMS by placing a mark on a 10-centimeter line would result in increased risk of relapse by a factor 1.15 over a period of 5.5 years [9]. Moreover, the VAMS had excellent diagnostic accuracy in the classification of a current depressive episode, both in terms of discriminative power and diagnostic accuracy [19]. Despite these promising results, it remains to be established whether sadness is related to other well-known potentially modifiable vulnerability factors, which will be the focus of the current study. Relapse prevention interventions focus on potentially modifiable risk factors for relapse that are known to negatively influence the course of depression. These potentially modifiable risk factors include dysfunctional beliefs, cognitive reactivity, rumination and daily stress [14], [20], [21] and [22]. Recent cognitive theories suggest that dysfunctional beliefs are mood state dependent [23], [24] and [25], and their degree of activation by mild sadness caused by stressors signals vulnerability for depression (i.e., cognitive reactivity) [26]. However, the evidence for the mood state dependence of dysfunctional beliefs is highly mixed, since it was found that dysfunctional beliefs also predict relapse in depression without activation [12], [21] and [27]. Moreover, the experience of sadness or daily stress, without taking cognition into account, was found to predict relapse in depression directly [9], [10], [14] and [28]. Therefore, it remains unclear whether belief activation (or the presence of dormant beliefs) is crucial in the causal chain from stress or negative affect to relapse in depression. Given that negative affect and the intensity and frequency of daily stress are related [29], [30], [31] and [32], it could be that patients with higher sadness after remission experience more stressors or are more affected by daily stressors due to reduced stress tolerance. Alternatively, higher negative affect also could be the direct result of stressors (and all could be true). The aim of the current study is to increase our understanding of the role of cognition, stress, and emotion in the pathway to depressive relapse. We will 1) examine whether patients with a higher number of previous MDEs experience higher levels of sad mood after remission, as suggested by the emotional scarring hypothesis; 2) study potentially modifiable correlates of sadness assessed after remission, including dysfunctional beliefs, cognitive reactivity, rumination, and the intensity and frequency of daily stress, whilst also including illness related variables (i.e., residual depressive symptoms, age of onset, number of previous depressive episodes, and last episode severity); and finally 3) attempt to replicate previous findings on the predictive validity of the VAMS by assessing whether baseline sadness (VAMS) predicts depressive symptomatology three months later.