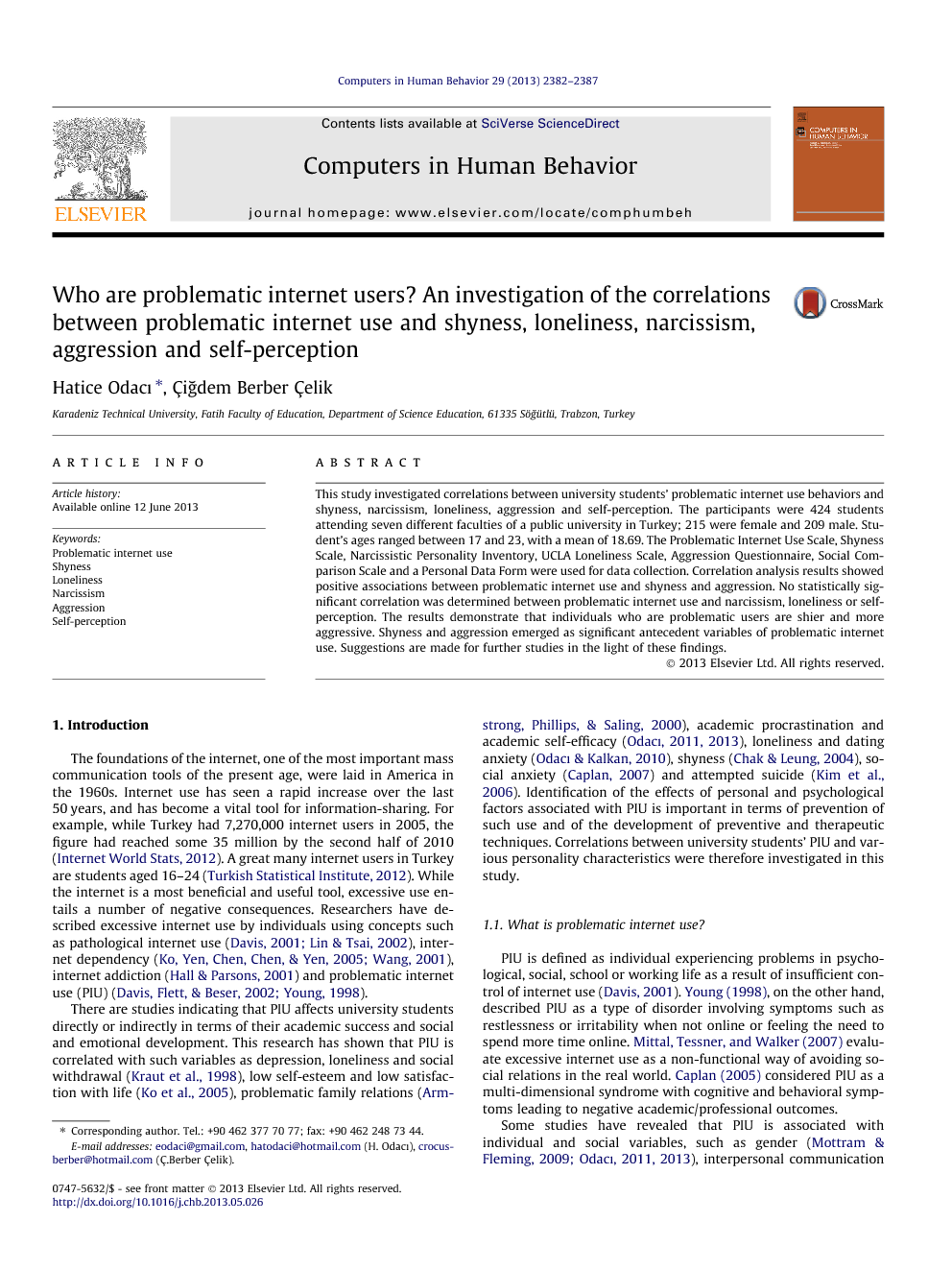 This study investigated correlations between university students’ problematic internet use behaviors and shyness, narcissism, loneliness, aggression and self-perception. The participants were 424 students attending seven different faculties of a public university in Turkey; 215 were female and 209 male. Student’s ages ranged between 17 and 23, with a mean of 18.69. The Problematic Internet Use Scale, Shyness Scale, Narcissistic Personality Inventory, UCLA Loneliness Scale, Aggression Questionnaire, Social Comparison Scale and a Personal Data Form were used for data collection. Correlation analysis results showed positive associations between problematic internet use and shyness and aggression. No statistically significant correlation was determined between problematic internet use and narcissism, loneliness or self-perception. The results demonstrate that individuals who are problematic users are shier and more aggressive. Shyness and aggression emerged as significant antecedent variables of problematic internet use. Suggestions are made for further studies in the light of these findings.

The foundations of the internet, one of the most important mass communication tools of the present age, were laid in America in the 1960s. Internet use has seen a rapid increase over the last 50 years, and has become a vital tool for information-sharing. For example, while Turkey had 7,270,000 internet users in 2005, the figure had reached some 35 million by the second half of 2010 (Internet World Stats, 2012). A great many internet users in Turkey are students aged 16–24 (Turkish Statistical Institute, 2012). While the internet is a most beneficial and useful tool, excessive use entails a number of negative consequences. Researchers have described excessive internet use by individuals using concepts such as pathological internet use (Davis, 2001 and Lin and Tsai, 2002), internet dependency (Ko et al., 2005 and Wang, 2001), internet addiction (Hall & Parsons, 2001) and problematic internet use (PIU) (Davis et al., 2002 and Young, 1998). There are studies indicating that PIU affects university students directly or indirectly in terms of their academic success and social and emotional development. This research has shown that PIU is correlated with such variables as depression, loneliness and social withdrawal (Kraut et al., 1998), low self-esteem and low satisfaction with life (Ko et al., 2005), problematic family relations (Armstrong, Phillips, & Saling, 2000), academic procrastination and academic self-efficacy (Odacı, 2011 and Odacı, 2013), loneliness and dating anxiety (Odacı & Kalkan, 2010), shyness (Chak & Leung, 2004), social anxiety (Caplan, 2007) and attempted suicide (Kim et al., 2006). Identification of the effects of personal and psychological factors associated with PIU is important in terms of prevention of such use and of the development of preventive and therapeutic techniques. Correlations between university students’ PIU and various personality characteristics were therefore investigated in this study.

The findings from this study will assist practitioners and researchers in identifying risk groups, taking preventive measures and adopting policies aimed at those risk groups. Problematic internet use being correlated with shyness and aggression makes it essential for it to be borne in mind in psycho-educational and interventional programs to be prepared for university students in the future. It will also be useful for shyness, self-perception and narcissistic personality traits to be considered in intervention programs. In that context, intervention programs based on such cognitive behavioral and control concepts as communication skills and impulse control training may be effective in preventing and overcoming PIU.