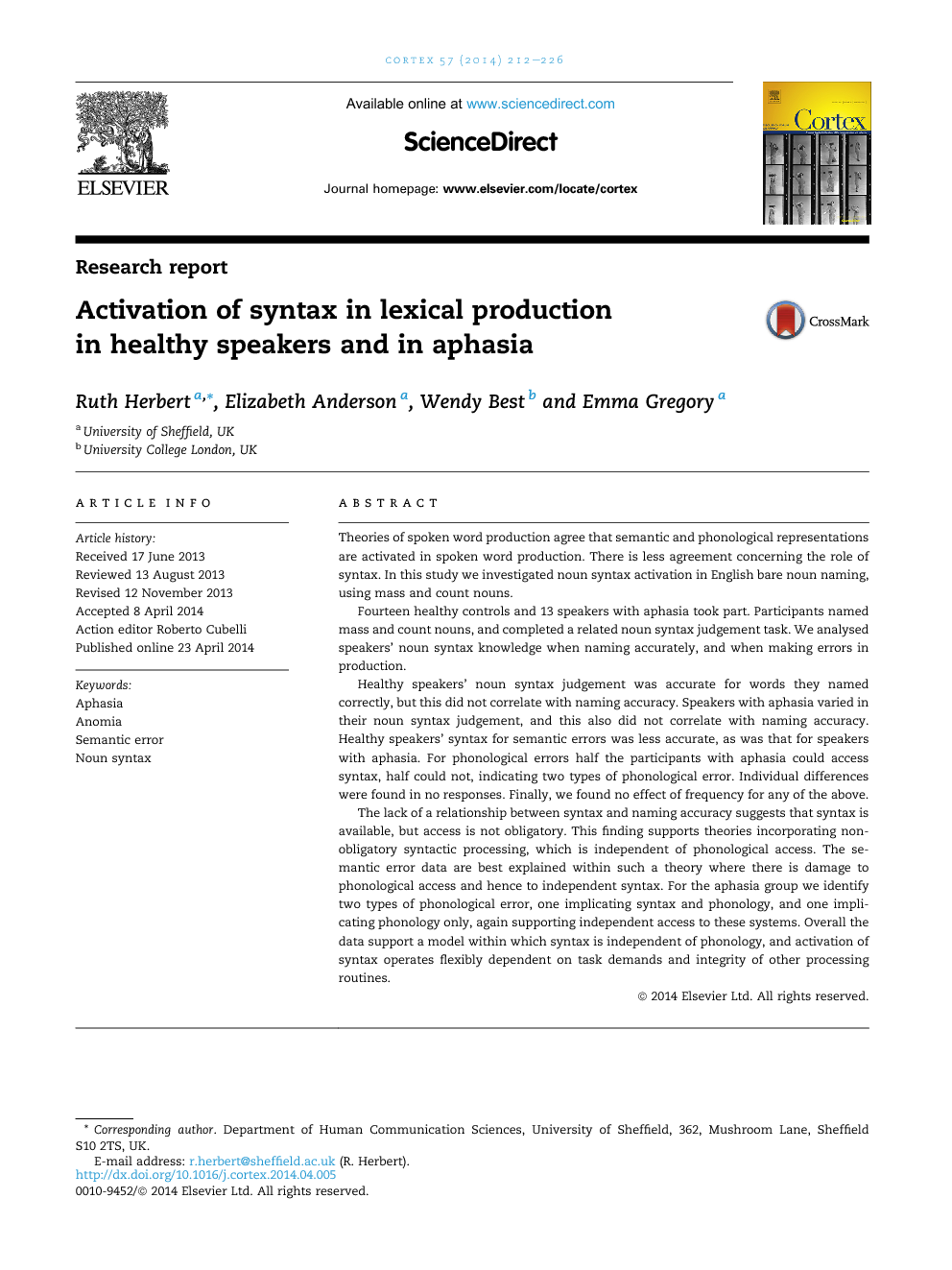 Theories of spoken word production agree that semantic and phonological representations are activated in spoken word production. There is less agreement concerning the role of syntax. In this study we investigated noun syntax activation in English bare noun naming, using mass and count nouns. Fourteen healthy controls and 13 speakers with aphasia took part. Participants named mass and count nouns, and completed a related noun syntax judgement task. We analysed speakers' noun syntax knowledge when naming accurately, and when making errors in production. Healthy speakers' noun syntax judgement was accurate for words they named correctly, but this did not correlate with naming accuracy. Speakers with aphasia varied in their noun syntax judgement, and this also did not correlate with naming accuracy. Healthy speakers' syntax for semantic errors was less accurate, as was that for speakers with aphasia. For phonological errors half the participants with aphasia could access syntax, half could not, indicating two types of phonological error. Individual differences were found in no responses. Finally, we found no effect of frequency for any of the above. The lack of a relationship between syntax and naming accuracy suggests that syntax is available, but access is not obligatory. This finding supports theories incorporating non-obligatory syntactic processing, which is independent of phonological access. The semantic error data are best explained within such a theory where there is damage to phonological access and hence to independent syntax. For the aphasia group we identify two types of phonological error, one implicating syntax and phonology, and one implicating phonology only, again supporting independent access to these systems. Overall the data support a model within which syntax is independent of phonology, and activation of syntax operates flexibly dependent on task demands and integrity of other processing routines.

1.1. Theories of spoken word production The degree to which speakers access syntactic information while producing spoken words remains a focus of debate in psycholinguistics, in particular whether syntax is co-activated when a word is produced in isolation. In spoken production an activated semantic representation maps onto the relevant phonological code. There seems little debate around this, and several lines of enquiry converge on this universal finding. A number of theories propose that spoken word production involves primarily just these two levels (Caramazza, 1997, Ellis and Young, 1996 and Patterson and Shewell, 1987), and the focus in most studies of anomia and rehabilitation lies squarely in these two domains (e.g., Howard et al., 1985 and Wisenburn and Mahoney, 2009). The finding of syntactic class constraints in error production (Dell et al., 1997, Fay and Cutler, 1977 and Garrett, 1975) led to the proposal that syntactic information is integrated into the lexicon. ERP investigations of the time-frame of lexical access have found evidence of syntactic activation prior to phonological access (e.g., van Turennout, Hagoort, & Brown, 1997), which Levelt, Roelofs, and Meyer (1999) incorporated into their WEAVER++ model as the lemma level, and which mediates between semantics and phonology. Word-specific lemma nodes give access to syntactic properties. In similar vein, but motivated by speech error data, Dell et al. (1997) proposed a ‘word’ level lying between semantics and phonology. Interactive activation between the levels explains grammatical class constraints in error production, as syntactic activation at the word level ensures that competitors sharing grammatical class receive greater activation. A number of authors have described the lemma stratum as a network of word-specific lemma nodes which connect to abstract word-independent combinatorial nodes, corresponding to the word's syntactic properties (e.g., Branigan and Pickering, 2004, Pickering and Branigan, 1998 and Rowland et al., 2012). For nouns this consists of grammatical class, grammatical gender, mass or count status, and pluralisation forms. According to the theory, nouns sharing syntactic properties such as grammatical gender will access the same gender node. This all assumes lexical representation of syntax, and that sentences are constructed from activated lexical representations. Hence such theories have been termed ‘lexicalist’ accounts (e.g., Vigliocco, Vinson, Druks, Barber, & Cappa, 2011). A strong argument against a purely lexicalist account of sentence production is presented in a recent review of the literature by Vigliocco et al. (2011). They concluded that this view of syntactic representation was not upheld by findings across a range of methodological approaches. They report the general finding of activation of syntax only when this is explicitly required, such as explicit marking of gender, number, or case on nouns. When words are produced in isolation there is no compelling evidence of syntactic activation. This view is instantiated in Caramazza's (1997) influential Independent Network (IN) model, which argues for the independence of syntax from semantic and word form information. 1.2. Evidence concerning the activation of syntax 1.2.1. Grammatical class and gender in healthy speakers – picture–word interference Effects have been investigated primarily with healthy speakers, using grammatical class or gender as the primes. Evidence for the activation of syntax in production has been found across a range of studies and languages, primarily when the task in question involved explicit engagement of morpho-syntactic information, for example in gender marking of adjectives or determiners. Effects have been found for grammatical class (e.g., Pechmann et al., 2004 and Pechmann and Zerbst, 2002) and for grammatical gender (e.g., Akhutina et al., 1999, La Heij et al., 1998, Schriefers, 1993, Schriefers and Teruel, 2000 and Vigliocco et al., 2002). Pechmann et al. (2004, p. 724) conclude that ‘activation of grammar depends on engagement of syntactic processes’. The counter-evidence, proposing activation of syntax in bare noun production comes from studies in French, Italian, Spanish, Russian and English. Melinger and Koenig (2007) primed grammatically ambiguous English words, such as ‘convict’, with either a noun or a verb, finding priming according to word class. Janssen, Melinger, Mahon, Finkbeiner, and Caramazza (2010) found an effect of grammatical category in their bare noun condition. Alario, Matos, and Segui (2004) found gender priming of bare nouns in French. Cubelli, Lotto, Paolieri, Girelli, and Job (2005) found gender interference for bare nouns in Italian, Akhutina et al. (2001) found gender priming effects in Russian, and Paolieri, Lotto, Leoncini, Cubelli, and Job (2011) found gender interference in naming bare nouns in Italian. Finally, in English, Gregory, Varley, and Herbert (2012) primed production of mass and count nouns with congruent determiners. So, across a range of languages, there is evidence of activation of syntactic information, even when this is not explicitly required for the production task, lending support to the claim that syntax is represented lexically. 1.2.2. Tip of the tongue (ToT) states in healthy speakers Vigliocco, Antonini, and Garrett (1997) found 84% accuracy in gender judgements in Italian speakers in ToT. In a similar study in English, Vigliocco, Vinson, Martin, and Garrett (1999) examined speakers' knowledge of mass and count syntax of nouns they could not name, finding above chance performance. Biedermann, Ruh, Nickels, and Coltheart (2008) found a dissociation between access to syntax and phonology in English and German speakers. Caramazza and Miozzo (1997) and Miozzo and Caramazza (1997) found similar results to Vigliocco et al. (1997). Crucially however the latter did not find a correlation between access to syntactic knowledge and access to phonological knowledge, concluding that the two forms of knowledge dissociated. Gollan and Silverberg (2001) found that healthy speakers were at chance on gender judgements when in ToT. As for gender priming, there are conflicting sets of evidence in this domain.

Table 4 shows overall naming accuracy, and, for those items which were named correctly, the proportion of them for which the syntax judgement was correct. Controls made few errors in naming, and each picture was named correctly by at least 12 of the 14. All participants responded at levels significantly above chance in their syntax judgement of correctly named words. These data suggest that controls were able to easily access related syntax when they named an item. None of the controls showed a difference between mass and count naming, or mass and count syntax judgement.