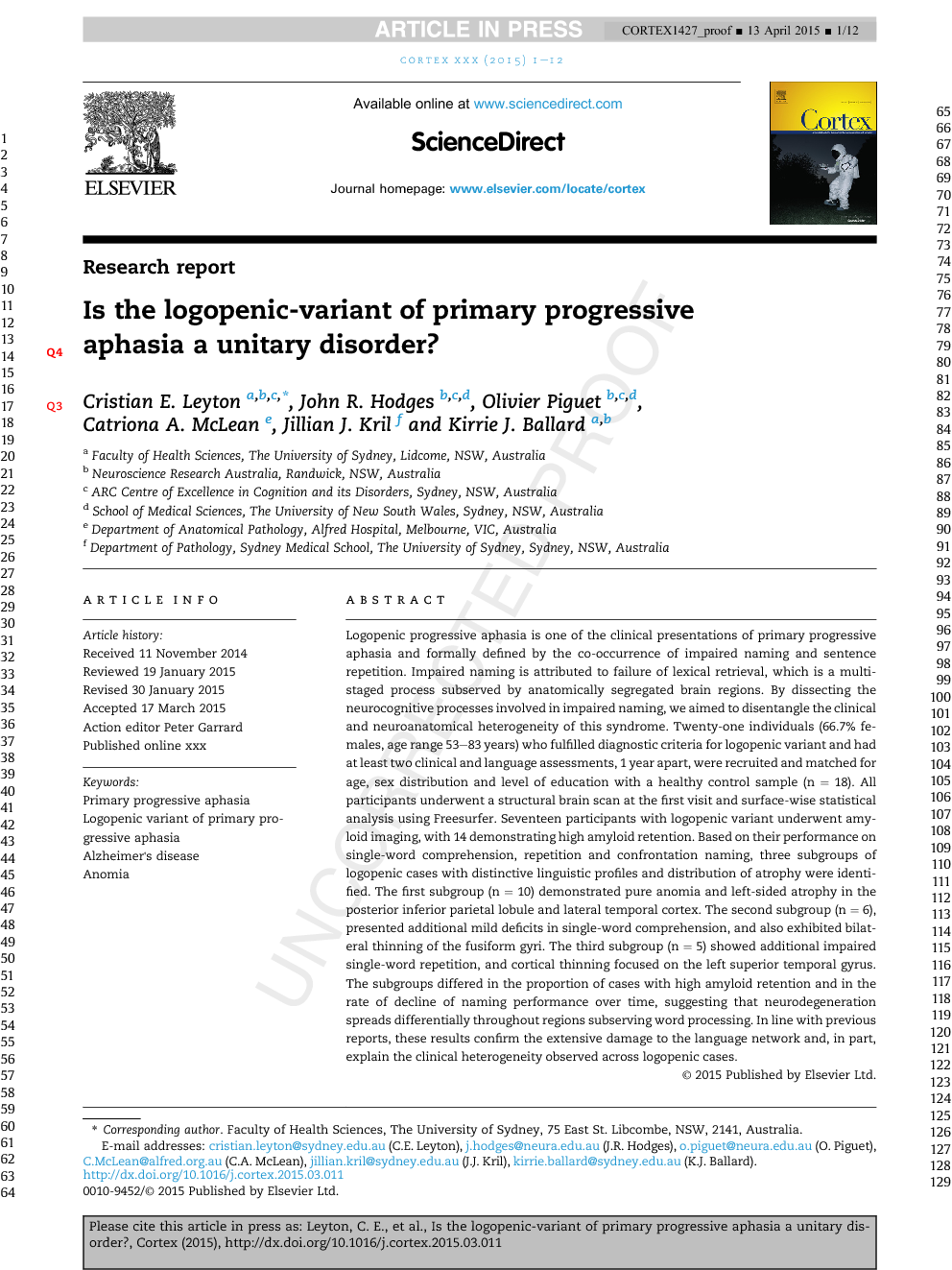 Logopenic progressive aphasia is one of the clinical presentations of primary progressive aphasia and formally defined by the co-occurrence of impaired naming and sentence repetition. Impaired naming is attributed to failure of lexical retrieval, which is a multi-staged process subserved by anatomically segregated brain regions. By dissecting the neurocognitive processes involved in impaired naming, we aimed to disentangle the clinical and neuroanatomical heterogeneity of this syndrome. Twenty-one individuals (66.7% females, age range 53–83 years) who fulfilled diagnostic criteria for logopenic variant and had at least two clinical and language assessments, 1 year apart, were recruited and matched for age, sex distribution and level of education with a healthy control sample (n = 18). All participants underwent a structural brain scan at the first visit and surface-wise statistical analysis using Freesurfer. Seventeen participants with logopenic variant underwent amyloid imaging, with 14 demonstrating high amyloid retention. Based on their performance on single-word comprehension, repetition and confrontation naming, three subgroups of logopenic cases with distinctive linguistic profiles and distribution of atrophy were identified. The first subgroup (n = 10) demonstrated pure anomia and left-sided atrophy in the posterior inferior parietal lobule and lateral temporal cortex. The second subgroup (n = 6), presented additional mild deficits in single-word comprehension, and also exhibited bilateral thinning of the fusiform gyri. The third subgroup (n = 5) showed additional impaired single-word repetition, and cortical thinning focused on the left superior temporal gyrus. The subgroups differed in the proportion of cases with high amyloid retention and in the rate of decline of naming performance over time, suggesting that neurodegeneration spreads differentially throughout regions subserving word processing. In line with previous reports, these results confirm the extensive damage to the language network and, in part, explain the clinical heterogeneity observed across logopenic cases.

The linguistic profile of the logopenic variant of primary progressive aphasia (lv-PPA) is defined by the co-occurrence of anomia, word-finding difficulties and impaired sentence repetition (Gorno-Tempini et al., 2011). These deficits result from the breakdown of several cognitive processes, including verbal short-term memory (Gorno-Tempini et al., 2008), lexical retrieval (Leyton, Piguet, Savage, Burrell, & Hodges, 2012) and phonological processing (Bonner and Grossman, 2012, Brambati et al., 2009, Goll et al., 2011 and Leyton and Hodges, 2013). Reflecting the involvement of these cognitive processes, the distribution of cortical atrophy in lv-PPA comprises an extensive swathe of the left hemisphere which underpins most of the components of the language network (Leyton et al., 2012, Mesulam et al., 2012 and Rohrer et al., 2010). Although atrophy of the left parietal-temporal junction represents the anatomical signature of lv-PPA, the extent of brain atrophy varies considerably from case to case, pointing to the presence of lv-PPA endophenotypes with slightly different clinical profiles, disease severity and decline over time (Leyton et al., 2014a and Machulda et al., 2013). Accordingly, although the vast majority of cases with lv-PPA have Alzheimer's disease (Chare et al., 2014, Harris et al., 2013, Mesulam et al., 2014 and Rohrer et al., 2012), this pathology demonstrates variable neuroanatomical extension which results in heterogeneous clinical presentations (Warren, Fletcher, & Golden, 2012). This clinical and anatomical heterogeneity opens the possibility that specific cognitive processes are predominantly damaged in some cases, but not in others. In this sense, the investigation of confrontation naming provides a suitable paradigm to explore the diversity of cognitive deficits in lv-PPA, as this task relies on the integration of separate, albeit interactive, steps requiring multiple cognitive processes anatomically segregated (Damasio et al., 2004 and DeLeon et al., 2007). Models of lexical production specify a number of discrete stages (Dell and O'Seaghdha, 1992 and Levelt, 2001), each of which can be separately damaged and result in impaired naming. In the first stage, the item to be named should be recognised, for which the integrity and access to semantic representations are crucial. Failure at this stage, as in the semantic variant of PPA, not only results in profound anomia, but also in failure on object recognition and word-comprehension tasks. In the intermediate stage, referred to as lexical retrieval, the semantic representation is linked to its arbitrary phonological word form. In other words, although the item can be recognised, the specific target word is not yet retrieved. At the final, or post-lexical, stage the phonological information is temporarily stored in the phonological buffer in order to execute the motor plan of the intended utterance. Consequently, failure at this level can result in marked difficulties with repetition, particularly for multisyllabic words and long sentences (Leyton, Savage, et al., 2014). Given that diagnostic criteria for lv-PPA explicitly exclude significant impairments in single-word comprehension, object knowledge or motor aspects of speech, it can be presumed that the main mechanism underlying anomia in lv-PPA is impaired retrieval of the phonological form. Nevertheless, given the broad extension of pathological changes in lv-PPA (Leyton et al., 2012, Rohrer et al., 2010 and Teichmann et al., 2013) over most of the left-sided language regions involved in semantic and lexical processing (Indefrey and Levelt, 2004 and Price et al., 2005), it is possible that other stages of naming processing are also compromised. On these grounds, the concurrent analysis of performance across a range of single-word tasks and structural neuroimaging measures can not only contribute to decipher the clinical and neuroanatomical heterogeneity of the logopenic syndrome, but also reveal sub-groups with distinctive neurobiological features and prognosis. Furthermore, information related to the preservation and involvement of various linguistic components can provide the rational basis for planning and implementing behavioural interventions (Best et al., 2013). The aim of this study was to ascertain the neurocognitive processes involved in impaired naming in lv-PPA by examining patterns of performance on single-word processing tasks and naming errors. Accordingly, we hypothesised that this set of tasks would allow the identification of coherent clinical subgroups with distinctive patterns of brain atrophy and neurobiological behaviour. As such, a second aim was to observe the clinical progression of lv-PPA over consecutive assessments and infer the proportion of cases with Alzheimer pathology in each group.

The analysis of single-word processing demonstrated an extensive involvement across several stages of word production in lv-PPA. This involvement varied across cases, suggesting that different neurobiological factors, some not yet fully understood, may play a role in the clinical diversity. Although in most cases the underlying pathology is presumably Alzheimer's disease, a few cases evolved with atypical features that prompted the consideration of an alternative diagnosis. Alternatively, the diverging neuroanatomical involvement may reflect the pathological spreading of same pathology detected at multiple stages. Further research is needed to replicate our findings and to better characterise the progression of this syndrome.