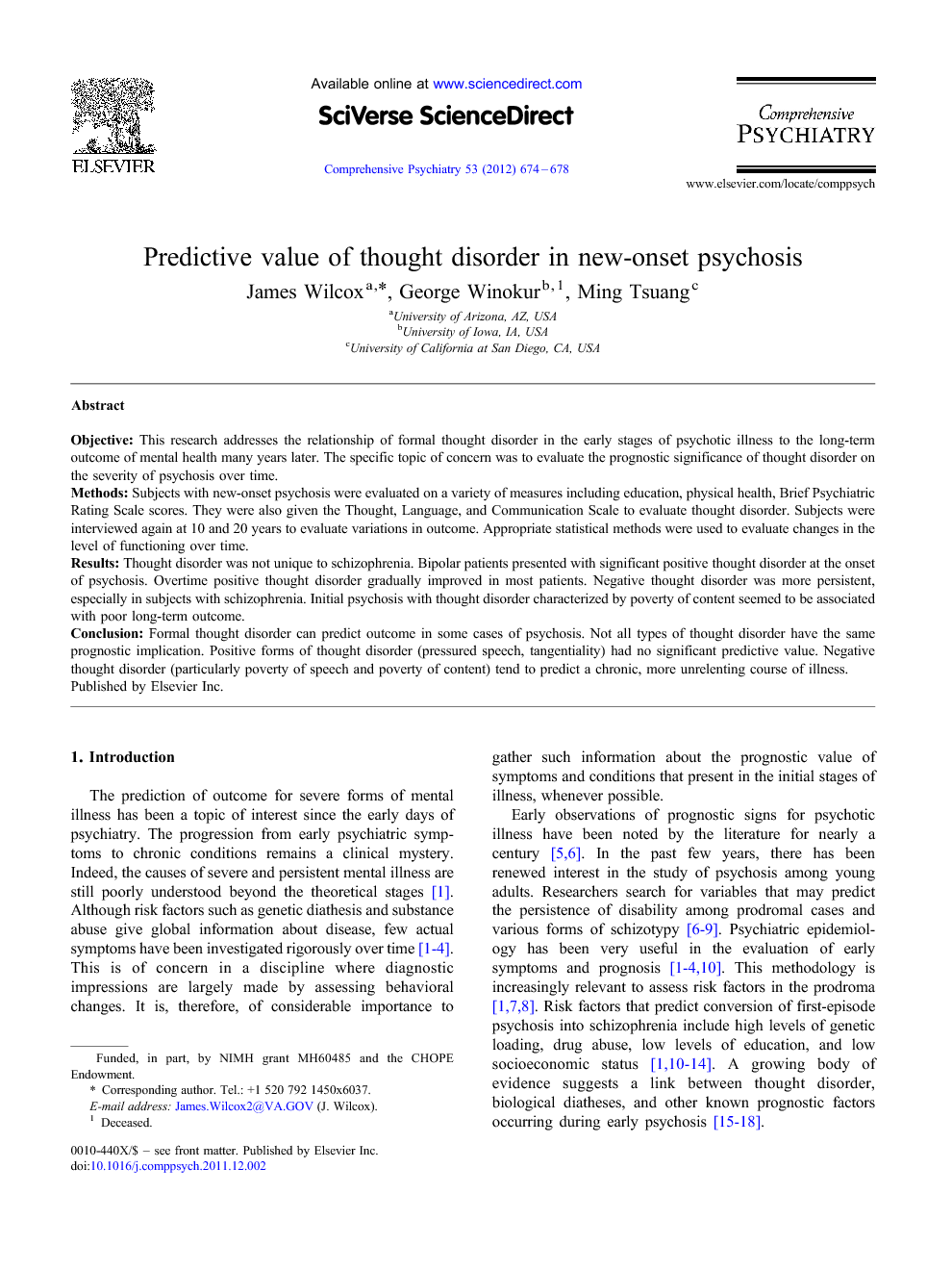 The prediction of outcome for severe forms of mental illness has been a topic of interest since the early days of psychiatry. The progression from early psychiatric symptoms to chronic conditions remains a clinical mystery. Indeed, the causes of severe and persistent mental illness are still poorly understood beyond the theoretical stages [1]. Although risk factors such as genetic diathesis and substance abuse give global information about disease, few actual symptoms have been investigated rigorously over time [1], [2], [3] and [4]. This is of concern in a discipline where diagnostic impressions are largely made by assessing behavioral changes. It is, therefore, of considerable importance to gather such information about the prognostic value of symptoms and conditions that present in the initial stages of illness, whenever possible. Early observations of prognostic signs for psychotic illness have been noted by the literature for nearly a century [5] and [6]. In the past few years, there has been renewed interest in the study of psychosis among young adults. Researchers search for variables that may predict the persistence of disability among prodromal cases and various forms of schizotypy [6], [7], [8] and [9]. Psychiatric epidemiology has been very useful in the evaluation of early symptoms and prognosis [1], [2], [3], [4] and [10]. This methodology is increasingly relevant to assess risk factors in the prodroma [1], [7] and [8]. Risk factors that predict conversion of first-episode psychosis into schizophrenia include high levels of genetic loading, drug abuse, low levels of education, and low socioeconomic status [1], [10], [11], [12], [13] and [14]. A growing body of evidence suggests a link between thought disorder, biological diatheses, and other known prognostic factors occurring during early psychosis [15], [16], [17] and [18]. Since the early work of Bleuler [19], Kraepelin [5] and [6], and Moukas et al [7], thought disorder has been considered a major symptom of psychosis. Andreasen and Grove [20] and [21] have found that formal thought disorder has predictive value in psychiatric diagnoses over several months. They have found that negative thought disorder seems to predict the short-term outcome of schizophrenia over several months. Patients with a poverty of speech and poverty of content were more likely to have a form of schizophrenia, whereas positive forms of thought disorder were more common among the affective psychoses [5], [6], [13], [14] and [21]. Several instruments to evaluate thought disorder presently exist [20], [21], [22] and [23]. These inventories appear valid and reliable and have been used in a variety of studies [20], [21], [22] and [23]. General syndrome inventory instruments have been suitable for replication and evaluation over time and have proven to be useful tools in the area of psychiatric epidemiology [12], [13], [14], [15], [20], [21], [22], [23] and [24]. Indeed, the field of epidemiology has been very useful in areas of validity and prognostic prediction [13], [14] and [15]. This study was designed to look for prognostic variables in early stages of psychosis and to follow subjects over time to assess the relative value of demographic and symptomatic data several years after the first onset of symptoms. We were mainly concerned with cases of new-onset psychosis (in the first 8 months) and to see how these patients progressed over the following years. We concentrated our efforts on subjects who were psychotic, regardless of their diagnosis.