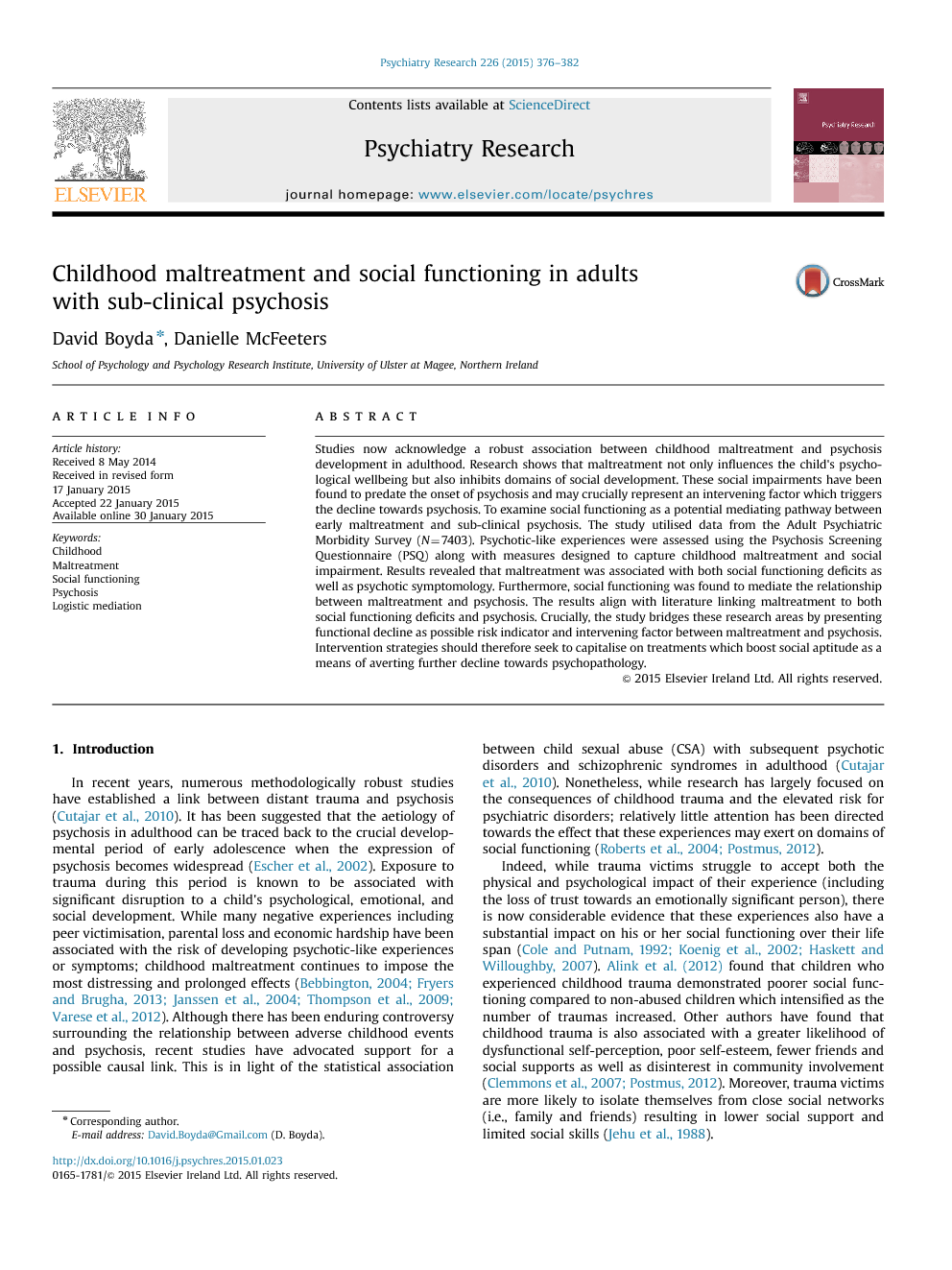 In recent years, numerous methodologically robust studies have established a link between distant trauma and psychosis (Cutajar et al., 2010). It has been suggested that the aetiology of psychosis in adulthood can be traced back to the crucial developmental period of early adolescence when the expression of psychosis becomes widespread (Escher et al., 2002). Exposure to trauma during this period is known to be associated with significant disruption to a child׳s psychological, emotional, and social development. While many negative experiences including peer victimisation, parental loss and economic hardship have been associated with the risk of developing psychotic-like experiences or symptoms; childhood maltreatment continues to impose the most distressing and prolonged effects (Bebbington, 2004, Fryers and Brugha, 2013, Janssen et al., 2004, Thompson et al., 2009 and Varese et al., 2012). Although there has been enduring controversy surrounding the relationship between adverse childhood events and psychosis, recent studies have advocated support for a possible causal link. This is in light of the statistical association between child sexual abuse (CSA) with subsequent psychotic disorders and schizophrenic syndromes in adulthood (Cutajar et al., 2010). Nonetheless, while research has largely focused on the consequences of childhood trauma and the elevated risk for psychiatric disorders; relatively little attention has been directed towards the effect that these experiences may exert on domains of social functioning (Roberts et al., 2004 and Postmus, 2012). Indeed, while trauma victims struggle to accept both the physical and psychological impact of their experience (including the loss of trust towards an emotionally significant person), there is now considerable evidence that these experiences also have a substantial impact on his or her social functioning over their life span (Cole and Putnam, 1992, Koenig et al., 2002 and Haskett and Willoughby, 2007). Alink et al. (2012) found that children who experienced childhood trauma demonstrated poorer social functioning compared to non-abused children which intensified as the number of traumas increased. Other authors have found that childhood trauma is also associated with a greater likelihood of dysfunctional self-perception, poor self-esteem, fewer friends and social supports as well as disinterest in community involvement (Clemmons et al., 2007 and Postmus, 2012). Moreover, trauma victims are more likely to isolate themselves from close social networks (i.e., family and friends) resulting in lower social support and limited social skills (Jehu et al., 1988). Furthermore, a litany of studies now report that adult survivors frequently develop problems in interpersonal functioning including mistrust of others which can manifest in emotionally unstable and chaotic relationships (Dietrich, 2007). This may be a consequence of the timing of trauma in the developmental trajectory given that such maltreatment typically occurs at a time when beliefs and expectations are initially formed regarding interpersonal relationships. In sum, the impact of being sexually or physically abused, emotionally or physically neglected in childhood is likely to propagate into adulthood, manifesting in difficulties across domains of daily functioning. These factors are associated with poorer cognitive skills and reduced learning potential including the ability to work and financially sustain oneself (Postmus, 2012). Indeed impairments in social functioning are a common feature in individuals at ultra-high risk (UHR) for psychotic disorder (Addington et al., 2008). Such impairments can impede functionality in domains necessary for normal daily activities such as self-care, household activities, use of public transport and areas of interpersonal functioning such as communication and interaction with others (Viertiö et al., 2012). Furthermore, individuals with a psychotic disorder tend to be less independent, are less likely to be employed or in a partnership and are less satisfied with social relationships potentially increasing the risk of becoming socially isolated (Steiger, 1990). Prospective studies examining the behaviour of children genetically deemed high risk due to parental history of psychosis show patterns of social impairments which are thought to predict vulnerability to schizophrenia (Hans et al., 1992, Hans et al., 2000 and Collip et al., 2013). In fact, recent studies have noted that impairments in social functioning often precedes the onset of psychosis (Ballon et al., 2007, Chudleigh et al., 2011, Ienciu et al., 2013 and Kelleher et al., 2013) and as such may represent a useful subsyndromal marker. However, despite extensive literature linking childhood trauma and social impairment to psychosis; few studies if any have examined whether psychotic outcomes are contingent on the additional effect of poor social functioning resulting from early trauma. In lieu of this, the current study sought to examine social functioning and loneliness as potential mediating pathways between early adverse experience and psychosis. First it was hypothesised that the experience of childhood trauma would significantly predict impairments across domains of social functioning and loneliness. Second, it was hypothesised that experiences of childhood trauma would be significantly and directly associated with psychotic like experiences. The final aim was to test whether the relationship between childhood trauma and psychotic like experiences would be mediated through dimensions of social functioning and loneliness after controlling for social and behavioural correlates known to pose a risk for psychosis.

Empirical reviews have established that severe childhood maltreatment is associated with a host of immediate and long-term sequelae which persist into adulthood (Davis et al., 2001). Since, childhood maltreatment is unlikely to transpire in isolation but instead co-occur in the context of other forms (Briere and Spinazzola, 2005) the findings emphasise the varied and additional adversities faced by maltreated children and demonstrate that young victims are at a higher risk of presenting impairments across varied domains of social functioning. The findings of the present study are in line with previous work that illustrates that childhood maltreatment has formerly been linked to decreased intellectual and cognitive functioning, deficits in pro-social behaviour, social withdrawal and isolation, as well as deficits in social competence with peers including avoidance of adults (Ingersoll and Welfel, 2003). Moreover, the findings also supports other research which suggests that impaired social functioning may be an important risk factor for the development of psychosis (Cornblatt et al., 2012 and Collip et al., 2013). To our knowledge this is the first study which has proposed a model whereby multiple risk factors for psychosis were examined together and when considered in its entirety, domains of social functioning may be deemed important intermediaries between previous experiences and normal psychological functioning.