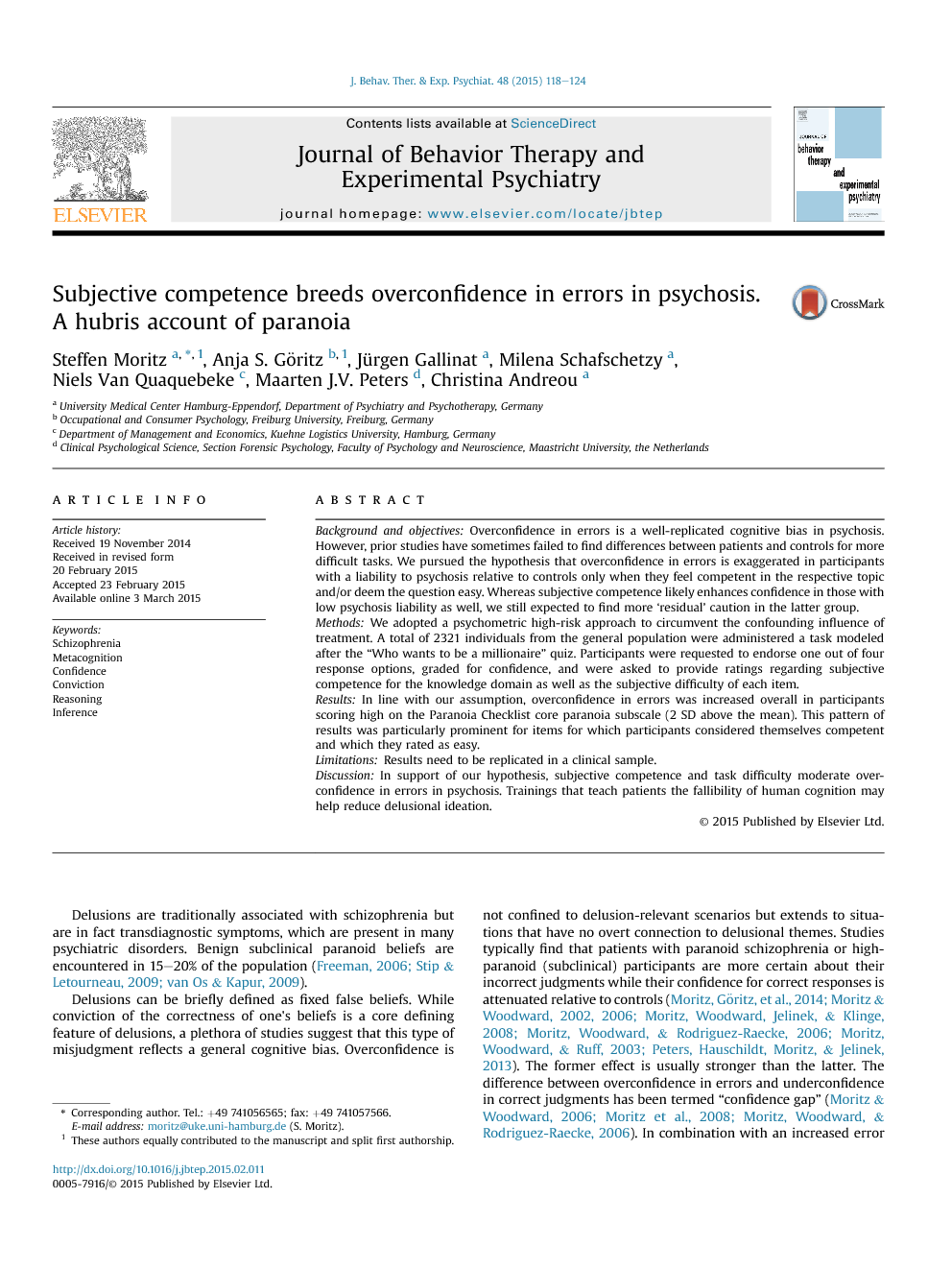 Background and objectives Overconfidence in errors is a well-replicated cognitive bias in psychosis. However, prior studies have sometimes failed to find differences between patients and controls for more difficult tasks. We pursued the hypothesis that overconfidence in errors is exaggerated in participants with a liability to psychosis relative to controls only when they feel competent in the respective topic and/or deem the question easy. Whereas subjective competence likely enhances confidence in those with low psychosis liability as well, we still expected to find more ‘residual’ caution in the latter group. Methods We adopted a psychometric high-risk approach to circumvent the confounding influence of treatment. A total of 2321 individuals from the general population were administered a task modeled after the “Who wants to be a millionaire” quiz. Participants were requested to endorse one out of four response options, graded for confidence, and were asked to provide ratings regarding subjective competence for the knowledge domain as well as the subjective difficulty of each item. Results In line with our assumption, overconfidence in errors was increased overall in participants scoring high on the Paranoia Checklist core paranoia subscale (2 SD above the mean). This pattern of results was particularly prominent for items for which participants considered themselves competent and which they rated as easy. Limitations Results need to be replicated in a clinical sample. Discussion In support of our hypothesis, subjective competence and task difficulty moderate overconfidence in errors in psychosis. Trainings that teach patients the fallibility of human cognition may help reduce delusional ideation.

Delusions are traditionally associated with schizophrenia but are in fact transdiagnostic symptoms, which are present in many psychiatric disorders. Benign subclinical paranoid beliefs are encountered in 15–20% of the population (Freeman, 2006, Stip and Letourneau, 2009 and van Os and Kapur, 2009). Delusions can be briefly defined as fixed false beliefs. While conviction of the correctness of one's beliefs is a core defining feature of delusions, a plethora of studies suggest that this type of misjudgment reflects a general cognitive bias. Overconfidence is not confined to delusion-relevant scenarios but extends to situations that have no overt connection to delusional themes. Studies typically find that patients with paranoid schizophrenia or high-paranoid (subclinical) participants are more certain about their incorrect judgments while their confidence for correct responses is attenuated relative to controls (Moritz et al., 2014, Moritz and Woodward, 2002, Moritz and Woodward, 2006, Moritz et al., 2008, Moritz et al., 2006, Moritz et al., 2003 and Peters et al., 2013). The former effect is usually stronger than the latter. The difference between overconfidence in errors and underconfidence in correct judgments has been termed “confidence gap” (Moritz and Woodward, 2006, Moritz et al., 2008 and Moritz et al., 2006). In combination with an increased error rate, it results in a state referred to as “knowledge corruption” (Moritz et al., 2014 and Moritz and Woodward, 2006), i.e., a large part of what a person believes to be factually true is contaminated or corrupted (knowledge corruption is defined as follows: high-confident errors/all high-confident judgments × 100%). Overconfidence in errors is considered a risk factor and fodder for new delusional beliefs (Moritz & Woodward, 2006) and may aggravate the behavioral and emotional consequences of false beliefs (Moritz & Van Quaquebeke, 2014). Overconfidence is thus considered one target mechanism in the treatment of psychosis; indeed, antipsychotics have been reported to attenuate overconfidence and induce doubt (Andreou et al., 2014, Moritz et al., 2013, Moritz et al., 2008 and Moritz et al., 2003). However, not all studies found the aforementioned pattern of results (i.e., enhanced confidence gap in psychosis). A recent study (Klass, 2013) was unable to detect overconfidence in errors for difficult knowledge questions. In contrast, the same study population (Moritz, Göritz, et al., 2014) was also administered a hidden figures test with low demands. Here, the expected pattern (i.e. overconfidence in errors in patients with psychosis) was replicated. Likewise, for a difficult social cognition test, patients with schizophrenia did not differ from healthy controls with respect to overconfidence in errors (Andreou et al., submitted), whereas more simple emotion recognition tasks yielded the expected pattern of overconfidence in errors (Kother et al., 2012 and Moritz et al., 2012). For source memory tasks, the degree of overconfidence in errors and underconfidence in correct responses seems to fluctuate depending on whether items are self-generated, externally generated, or novel (Gaweda et al., 2012, Moritz et al., 2005 and Peters et al., 2007). For a simple recognition task, patients with schizophrenia even displayed overconfidence in both correct and incorrect judgments (Kircher, Koch, Stottmeister, & Durst, 2007). In an earlier study on memory, differences between schizophrenia patients and controls in false recognition confidence were increased as a function of distracter difficulty (Moritz et al., 2008). The above stimulated the hypothesis that task difficulty and the subjective competence patients experience when performing these tasks may moderate the magnitude of their confidence. While it is reasonable to assume that subjective competence will augment confidence both in healthy controls and patients with psychotic disorders, the effect is predicted to be particularly prominent in patients, reflecting a lack of ‘residual’ caution. Multiple methodological differences across the various tasks used to calculate knowledge corruption in prior studies preclude firm conclusions. Therefore, for the present study we tested the above hypothesis within the framework of a single paradigm. We predicted that subjects scoring high on psychosis would display exaggerated overconfidence in errors for tasks in which they considered themselves competent and which they deemed easy. This would be in line with the clinical observation that delusional beliefs are not random ideas that ‘come out of the blue’ but often are rooted in patients' premorbid areas of subjective ‘expertise’ (e.g., interests and profession). Taking into account subjective competence in research regarding overconfidence may help to explain why some studies did not find a robust correlation between overconfidence with delusions. To pursue this hypothesis, we adopted a psychometric high-risk approach (Chapman and Chapman, 1988, Chapman and Chapman, 1985 and Lenzenweger and Korfine, 1994), particularly in order to circumvent the confound of antipsychotic medication and comorbid psychiatric disorders as well as treatment-related caveats (e.g., stigma). In such studies, nonclinical subjects scoring at least 2 SD above the mean on a psychosis liability scale are compared to those scoring no higher than .5 SD above the mean. We posed participants knowledge questions of a low, moderate or high degree of objective difficulty (e.g., ‘What are geysers?’) from the “Who wants to be a millionaire” quiz (for a forerunner study on a similar paradigm see Moritz, Woodward, & Hausmann, 2006) using a single-choice response format (demons, hot springs (correct), jewelry, ibexes) along with confidence ratings. Further, we asked whether participants felt competent for the respective topic and whether they deemed the question to be difficult, moderately difficult, easy or very easy. We felt it was important to determine subjective difficulty, as it may well differ from objective difficulty – for example, if a participant either under-or overestimates his/her level of expertise or has particular knowledge gaps versus strengths. For the overall analyses, we expected to find a narrowed confidence gap (overconfidence in errors, underconfidence in correct responses) in high-paranoid participants, with the additional prediction that subjective competence as well as difficulty would enhance the difference between high- and low-paranoid participants, particularly for incorrect judgments. If true, this finding may not only contribute to refining theoretical models of paranoia, but may also have implications for existing cognitive treatment programs for delusions (Garety and Freeman, 2013 and Moritz et al., 2014).