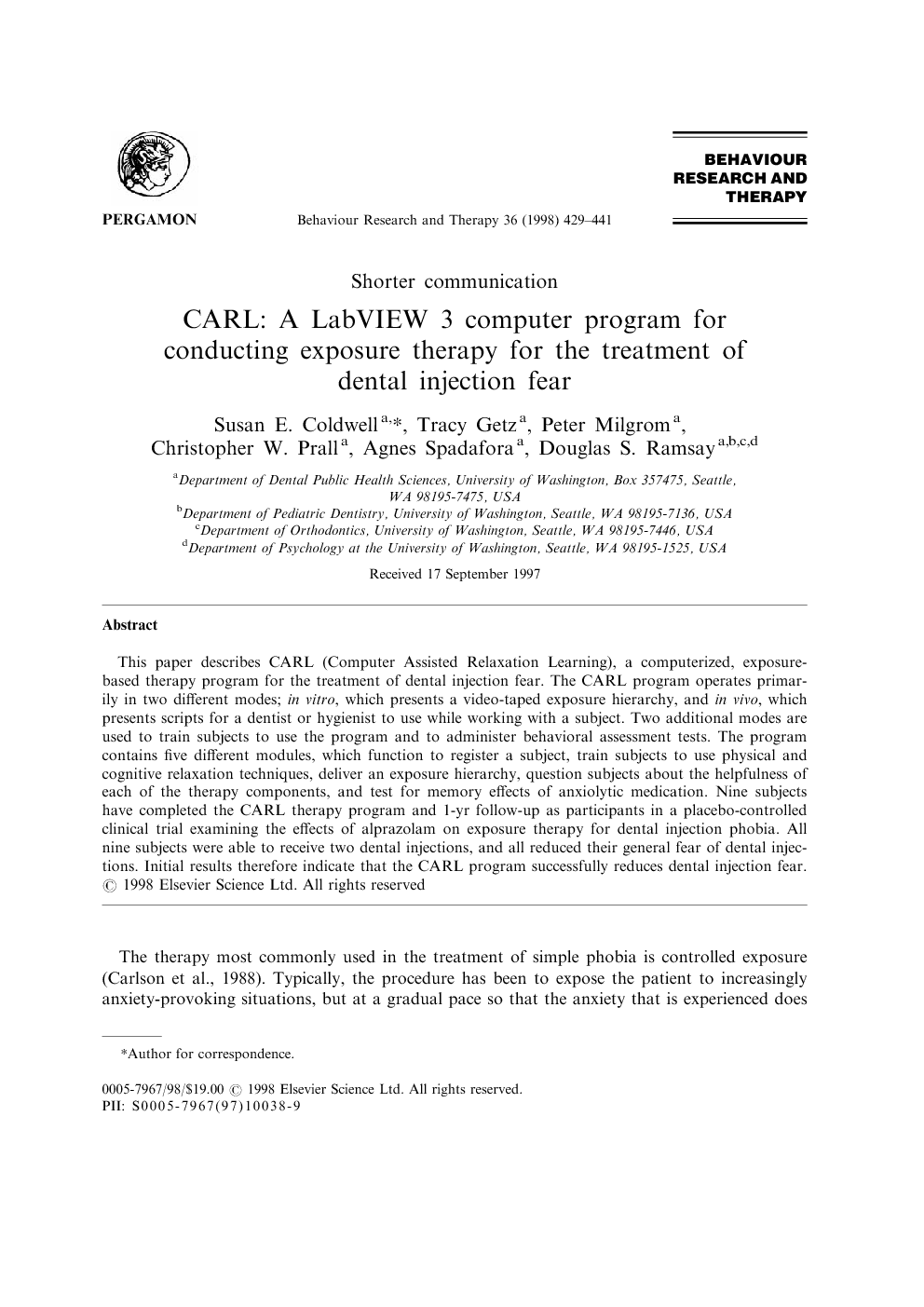 This paper describes CARL (Computer Assisted Relaxation Learning), a computerized, exposure-based therapy program for the treatment of dental injection fear. The CARL program operates primarily in two different modes; in vitro, which presents a video-taped exposure hierarchy, and in vivo, which presents scripts for a dentist or hygienist to use while working with a subject. Two additional modes are used to train subjects to use the program and to administer behavioral assessment tests. The program contains five different modules, which function to register a subject, train subjects to use physical and cognitive relaxation techniques, deliver an exposure hierarchy, question subjects about the helpfulness of each of the therapy components, and test for memory effects of anxiolytic medication. Nine subjects have completed the CARL therapy program and 1-yr follow-up as participants in a placebo-controlled clinical trial examining the effects of alprazolam on exposure therapy for dental injection phobia. All nine subjects were able to receive two dental injections, and all reduced their general fear of dental injections. Initial results therefore indicate that the CARL program successfully reduces dental injection fear.

The therapy most commonly used in the treatment of simple phobia is controlled exposure (Carlson et al., 1988). Typically, the procedure has been to expose the patient to increasingly anxiety-provoking situations, but at a gradual pace so that the anxiety that is experienced does not become overwhelming. Such basic exposure therapy has also been successfully combined with relaxation training, self-efficacy training, and modification of negative cognitions (Williams et al., 1985; Wolpe, 1982; Meichenbaum, 1977). Early successes with tape-recorded voice and video-tape exposure therapy (Berggren and Carlsson, 1984; Marks, 1975) have encouraged the recent introduction of computer-guided exposure therapy. In the earliest versions of computerized therapy, computers were used as substitute therapists. Computers helped the patient create an exposure hierarchy, instructed him/her to imagine the hierarchy situations, provided relaxation instruction, assigned homework tasks and collected information on how much anxiety was experienced as each task was accomplished (Carr et al., 1988; Chandler et al., 1988; Wilson et al., 1991). Recent advances in technology, however, have expanded the usefulness of computers in exposure-based therapy. Rothbaum and colleagues (Rothbaum et al., 1995) have successfully treated acrophobia using `virtual reality' to create gradual exposure to increasing heights. Subjects in this study were first exposed to a virtual footbridge 7 m above the water, and gradually worked through a variety of virtual situations culminating in a virtual glass elevator, which rose 49 floors to a height of 147 m above a virtual street. The investigators report significant reductions in anxiety, avoidance, and attitudes towards heights compared with a wait-list control 8 weeks following virtual reality therapy. Rothbaum's group is now expanding this technology to the treatment of fear of flying (Rothbaum et al., 1996). While such sophisticated computerized exposure may not be required to reduce patient fear, one group has reported that degraded images of spiders presented on a computer screen were not sufficient to reduce spider fear in two young children (Nelissen et al., 1995). Virtual reality exposure therapy for spider phobia has been reported to be more successful (Carlin et al., 1997). This paper describes a computerized, exposure-based therapy program for the treatment of dental injection fear. The effectiveness of exposure-based therapy for the treatment of dental fear has been well-documented (Gale and Ayer, 1969; Shaw and Thoresen, 1974; Klepac, 1975; Gatchel, 1980; Berggren and Linde, 1984). Semi-automated, video-tape based therapy has also been shown to be helpful in treating dental phobia (Berggren and Carlsson, 1984). This particular program was designed as part of a clinical trial to assess the efficacy of combining a short-acting anxiolytic agent, alprazolam, with exposure therapy for dental injection fear. The advantages of using a computer in this situation include; standardizing patient treatment, precisely controlling exposure duration and content, facilitating data collection (self-reported anxiety levels, heart rate data, etc.), and minimizing the need for therapist contact with the patients. 1. Hardware configuration The system is designed around a multimedia-configured Power Macintosh 8100/110. This 110-MHz machine has been upgraded to 40 MB RAM and 4 GB disk capacity. The operator has a MultiSync 17″ color monitor, extended keyboard and mouse. The operator's monitor is normally out of view of the S. The S views a second, MultiSync 15″ color monitor. This monitor is configured as the second Macintosh screen and is mounted on a movable platform over a dental chair, which is used by the S. The 15″ monitor is provided with full frame rate/full screen video capture and playback controlled by a Radius VideoVision Studio 2 system. A second keyboard is mounted under the 15″ monitor for the S's use. The S also uses a mouse, which rests on a mouse pad built into the arm of the dental chair. Electrocardiogram data are acquired from an EKG filtered isolation pre-amp (Scope Service Inc., EKG Isolated pre-amplifier-filter with 3 lead, low noise patient cable). The EKG pre-amp is connected to a National Instruments Lab-NB Multi-Function Data Acquisition board in the computer.

The CARL program consists of five different modules, which function to register a S, train Ss to use physical and cognitive relaxation techniques, deliver an exposure hierarchy, question Ss about the helpfulness of each of the therapy components, and test for memory effects of medication. The program runs in four different modes; training, which provides shortened versions of tasks and practice in using the program; in vitro, which provides a video exposure hierarchy; in vivo, which provides a script for a dentist or hygienist to follow when working directly with the patient; and second injection mode, which allows for a behavioral assessment test of anxiety to be given. The program has additional features that allow ECG recording, pauses, and early termination of the program. Data output is text in tab delimited format. ECG data are saved as 16 bit signed integers. Early results from the program are quite promising. The nine Ss, who have completed the program and follow-up were able to receive a second dental injection 1 week following the study. Furthermore, all of them had reduced general fear of dental injections 3 months following completion of the study. This reduction in general fear was maintained 1 yr following completion of the study. This degree of success was accomplished efficiently, requiring only two to five weekly sessions. Future adaptations of the program could be made to allow it to be readily used in dental offices, which do not have easy access to psychologists.