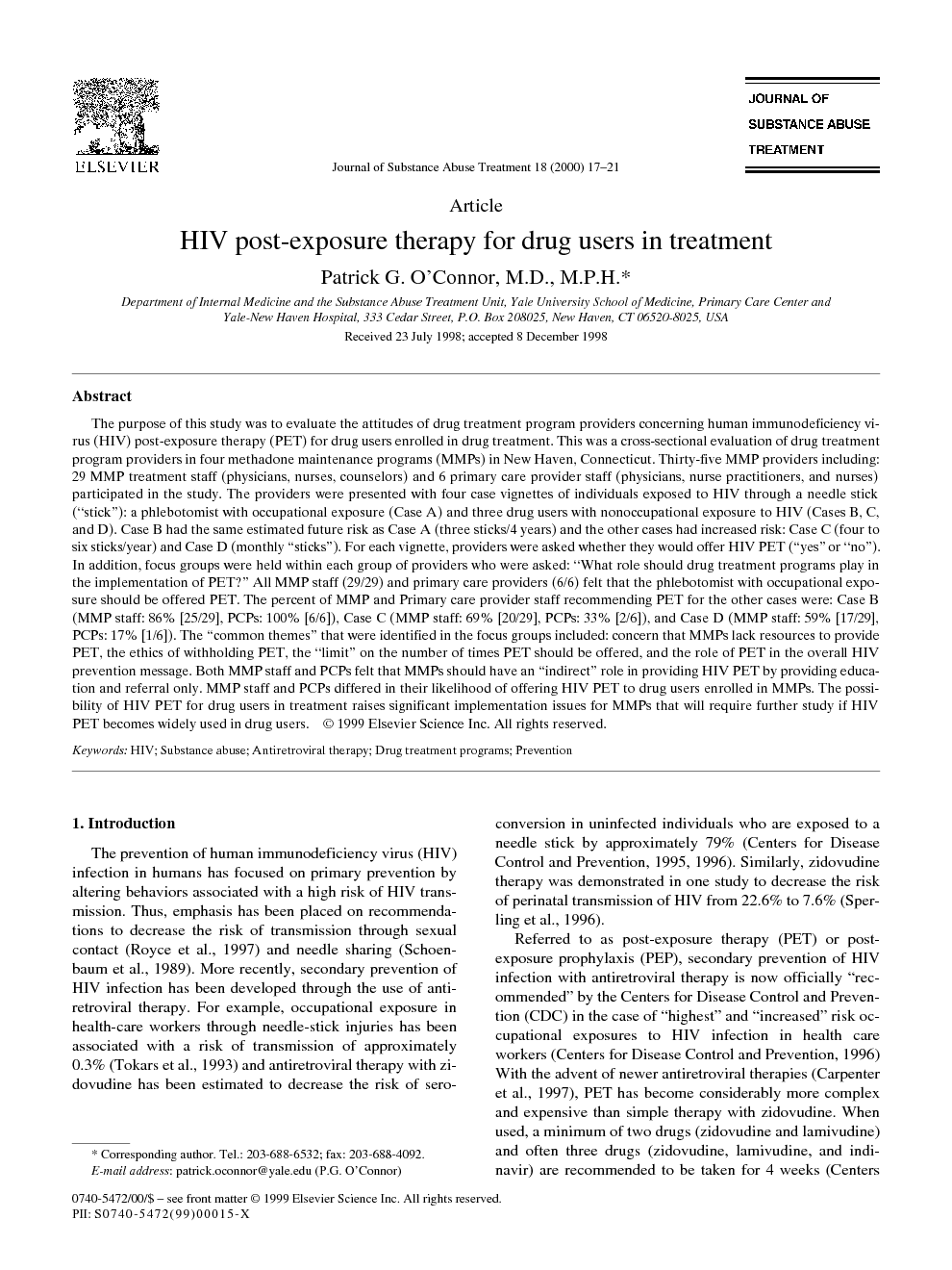 The purpose of this study was to evaluate the attitudes of drug treatment program providers concerning human immunodeficiency virus (HIV) post-exposure therapy (PET) for drug users enrolled in drug treatment. This was a cross-sectional evaluation of drug treatment program providers in four methadone maintenance programs (MMPs) in New Haven, Connecticut. Thirty-five MMP providers including: 29 MMP treatment staff (physicians, nurses, counselors) and 6 primary care provider staff (physicians, nurse practitioners, and nurses) participated in the study. The providers were presented with four case vignettes of individuals exposed to HIV through a needle stick (“stick”): a phlebotomist with occupational exposure (Case A) and three drug users with nonoccupational exposure to HIV (Cases B, C, and D). Case B had the same estimated future risk as Case A (three sticks/4 years) and the other cases had increased risk: Case C (four to six sticks/year) and Case D (monthly “sticks”). For each vignette, providers were asked whether they would offer HIV PET (“yes” or “no”). In addition, focus groups were held within each group of providers who were asked: “What role should drug treatment programs play in the implementation of PET?” All MMP staff (29/29) and primary care providers (6/6) felt that the phlebotomist with occupational exposure should be offered PET. The percent of MMP and Primary care provider staff recommending PET for the other cases were: Case B (MMP staff: 86% [25/29], PCPs: 100% [6/6]), Case C (MMP staff: 69% [20/29], PCPs: 33% [2/6]), and Case D (MMP staff: 59% [17/29], PCPs: 17% [1/6]). The “common themes” that were identified in the focus groups included: concern that MMPs lack resources to provide PET, the ethics of withholding PET, the “limit” on the number of times PET should be offered, and the role of PET in the overall HIV prevention message. Both MMP staff and PCPs felt that MMPs should have an “indirect” role in providing HIV PET by providing education and referral only. MMP staff and PCPs differed in their likelihood of offering HIV PET to drug users enrolled in MMPs. The possibility of HIV PET for drug users in treatment raises significant implementation issues for MMPs that will require further study if HIV PET becomes widely used in drug users.

The prevention of human immunodeficiency virus (HIV) infection in humans has focused on primary prevention by altering behaviors associated with a high risk of HIV transmission. Thus, emphasis has been placed on recommendations to decrease the risk of transmission through sexual contact (Royce et al., 1997) and needle sharing (Schoenbaum et al., 1989). More recently, secondary prevention of HIV infection has been developed through the use of antiretroviral therapy. For example, occupational exposure in health-care workers through needle-stick injuries has been associated with a risk of transmission of approximately 0.3% (Tokars et al., 1993) and antiretroviral therapy with zidovudine has been estimated to decrease the risk of seroconversion in uninfected individuals who are exposed to a needle stick by approximately 79% Centers for Disease Control and Prevention 1995 and Centers for Disease Control and Prevention 1996. Similarly, zidovudine therapy was demonstrated in one study to decrease the risk of perinatal transmission of HIV from 22.6% to 7.6% (Sperling et al., 1996). Referred to as post-exposure therapy (PET) or post-exposure prophylaxis (PEP), secondary prevention of HIV infection with antiretroviral therapy is now officially “recommended” by the Centers for Disease Control and Prevention (CDC) in the case of “highest” and “increased” risk occupational exposures to HIV infection in health care workers (Centers for Disease Control and Prevention, 1996) With the advent of newer antiretroviral therapies (Carpenter et al., 1997), PET has become considerably more complex and expensive than simple therapy with zidovudine. When used, a minimum of two drugs (zidovudine and lamivudine) and often three drugs (zidovudine, lamivudine, and indinavir) are recommended to be taken for 4 weeks (Centers for Disease Control and Prevention, 1996). This involves taking at least eight pills a day (using thrice daily dosing) (Centers for Disease Control and Prevention, 1996) at a cost of approximately $800 (Katz & Gerberding, 1997). If nonoccupational PET is to be made available more widely for “high-risk” exposures from needle-sharing and sexual behavior, drug users provide special challenges for practitioners who may be asked to provide this therapy. Drug abuse and dependence is associated with behaviors that are disorganizing and may make it difficult to gain access to and comply with PET. In addition, ongoing drug use is associated with repeated high-risk drug use and sexual behaviors, raising the possibility of repeated need for PET. This raises several concerns, for example, the possibility of promoting the development of drug-resistant strains of HIV. The concept of PET after sexual assault has been considered as one potential aspect of postassault care for survivors of sexual assault (Gostin et al., 1997). Although there is no empiric data in the literature on the use of PET in drug users, Katz and Gerberding (1997) recently recommended PET for “high-risk exposure” (e.g., needle sharing with an HIV-infected partner) “… when the exposure occurs in isolation or involves someone who intends to stop engaging in such behavior” (Katz & Gerberding, 1997). If drug users are to be considered as candidates for PET, “stable” participants in drug treatment programs—especially methadone maintenance programs (MMPs)—may be relatively “ideal” candidates. Along with out-of-treatment drug users in long-term recovery, such individuals may have the greatest potential for avoiding further exposure after completing an episode of PET. If patients enrolled in MMPs become potential candidates for PET, these programs, which are often the only and/or most frequented source of health care for their patients, may be asked to play a role in providing access to PET. The objective of this study was to examine the possibility of PET from the perspective of drug treatment providers. Specifically two questions were posed: “Which drug users enrolled in treatment are appropriate candidates for PET?” and “What role should drug treatment programs play in the implementation of PET?”