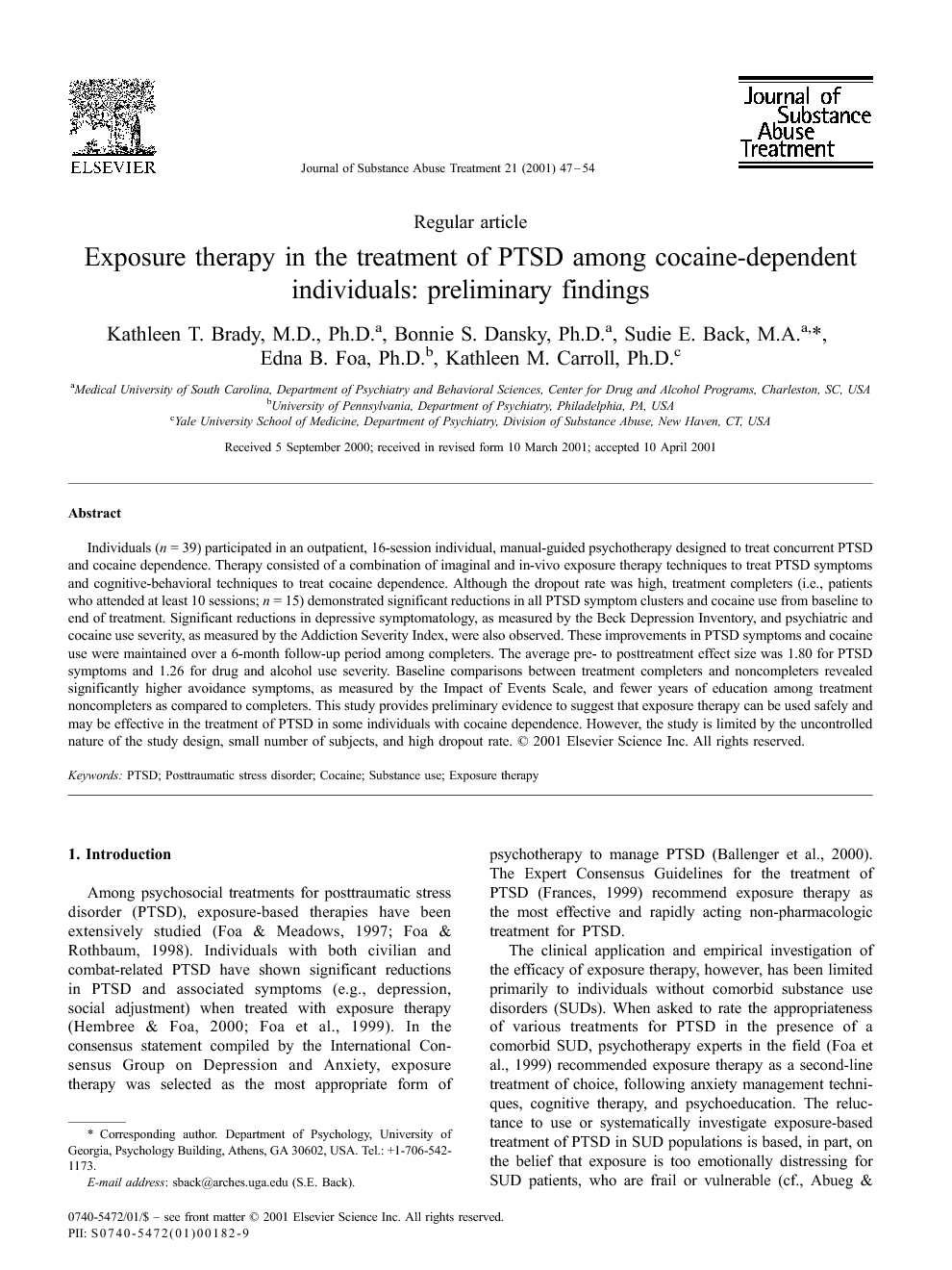 Individuals (n = 39) participated in an outpatient, 16-session individual, manual-guided psychotherapy designed to treat concurrent PTSD and cocaine dependence. Therapy consisted of a combination of imaginal and in-vivo exposure therapy techniques to treat PTSD symptoms and cognitive-behavioral techniques to treat cocaine dependence. Although the dropout rate was high, treatment completers (i.e., patients who attended at least 10 sessions; n = 15) demonstrated significant reductions in all PTSD symptom clusters and cocaine use from baseline to end of treatment. Significant reductions in depressive symptomatology, as measured by the Beck Depression Inventory, and psychiatric and cocaine use severity, as measured by the Addiction Severity Index, were also observed. These improvements in PTSD symptoms and cocaine use were maintained over a 6-month follow-up period among completers. The average pre- to posttreatment effect size was 1.80 for PTSD symptoms and 1.26 for drug and alcohol use severity. Baseline comparisons between treatment completers and noncompleters revealed significantly higher avoidance symptoms, as measured by the Impact of Events Scale, and fewer years of education among treatment noncompleters as compared to completers. This study provides preliminary evidence to suggest that exposure therapy can be used safely and may be effective in the treatment of PTSD in some individuals with cocaine dependence. However, the study is limited by the uncontrolled nature of the study design, small number of subjects, and high dropout rate.

Among psychosocial treatments for posttraumatic stress disorder (PTSD), exposure-based therapies have been extensively studied Foa & Meadows, 1997 and Foa & Rothbaum, 1998. Individuals with both civilian and combat-related PTSD have shown significant reductions in PTSD and associated symptoms (e.g., depression, social adjustment) when treated with exposure therapy Hembree & Foa, 2000 and Foa et al., 1999. In the consensus statement compiled by the International Consensus Group on Depression and Anxiety, exposure therapy was selected as the most appropriate form of psychotherapy to manage PTSD (Ballenger et al., 2000). The Expert Consensus Guidelines for the treatment of PTSD (Frances, 1999) recommend exposure therapy as the most effective and rapidly acting non-pharmacologic treatment for PTSD. The clinical application and empirical investigation of the efficacy of exposure therapy, however, has been limited primarily to individuals without comorbid substance use disorders (SUDs). When asked to rate the appropriateness of various treatments for PTSD in the presence of a comorbid SUD, psychotherapy experts in the field (Foa et al., 1999) recommended exposure therapy as a second-line treatment of choice, following anxiety management techniques, cognitive therapy, and psychoeducation. The reluctance to use or systematically investigate exposure-based treatment of PTSD in SUD populations is based, in part, on the belief that exposure is too emotionally distressing for SUD patients, who are frail or vulnerable (cf., Abueg & Fairbank, 1992; cf. Triffleman, Carroll, & Kellogg, 1999) to tolerate exposure without relapse. In addition, it has been suggested that SUD patients may be too cognitively impaired for imagery procedures Abueg & Fairbank, 1992 and Pitman et al., 1991. Several case studies investigating the use of exposure-based treatments in individuals with comorbid PTSD and a variety of SUDs have had mixed results Keane & Kaloupek, 1982, Mueser & Butler, 1987, Pitman et al., 1991 and Vaughan & Tarrier, 1992. An estimated 30% to 60% of individuals with SUDs meet criteria for comorbid PTSD Brown et al., 1995 and Stewart, 1996. These estimates are significantly greater than estimates of PTSD in the general population (8% to 9%; Kessler, Sonnega, Bromet, Hughes, & Nelson, 1995; Hidalgo & Davidson, 2000). Cottler, Compton, Mager, Spitznagel, and Janca (1992) found that cocaine/opiate users had the highest risk for comorbid PTSD and that the rate of PTSD was ten times higher in this group when compared to individuals without cocaine dependence. Many investigators have noted that PTSD/SUD comorbidity is associated with a more severe symptom profile, higher rates of Axis I and II pathology, more severe social impairment, and poorer treatment course and outcome Back et al., 2000, Brown et al., 1995, Najavits et al., 1998a, Ouimette et al., 1999 and Stewart et al., 1999. The goal of the present study was a preliminary, uncontrolled evaluation of the safety, efficacy, and tolerability of exposure therapy in the treatment of PTSD among a sample of individuals with comorbid PTSD and cocaine dependence. Patient retention and improvement in PTSD severity, cocaine use, and associated features during treatment and at 6 months follow-up were examined. Baseline characteristics of individuals who completed treatment (i.e., attended ten or more sessions) were compared with individuals who did not complete treatment.