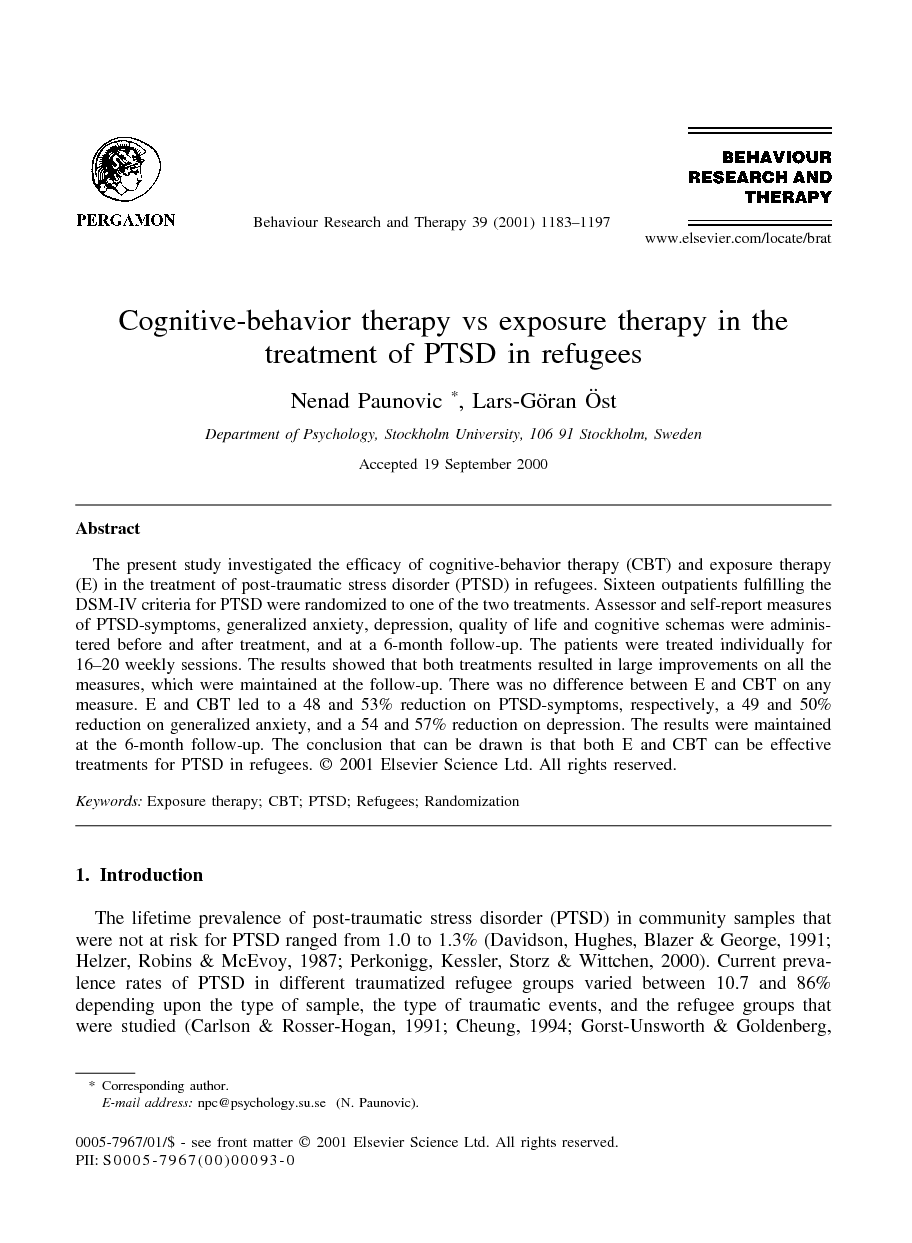 The present study investigated the efficacy of cognitive-behavior therapy (CBT) and exposure therapy (E) in the treatment of post-traumatic stress disorder (PTSD) in refugees. Sixteen outpatients fulfilling the DSM-IV criteria for PTSD were randomized to one of the two treatments. Assessor and self-report measures of PTSD-symptoms, generalized anxiety, depression, quality of life and cognitive schemas were administered before and after treatment, and at a 6-month follow-up. The patients were treated individually for 16–20 weekly sessions. The results showed that both treatments resulted in large improvements on all the measures, which were maintained at the follow-up. There was no difference between E and CBT on any measure. E and CBT led to a 48 and 53% reduction on PTSD-symptoms, respectively, a 49 and 50% reduction on generalized anxiety, and a 54 and 57% reduction on depression. The results were maintained at the 6-month follow-up. The conclusion that can be drawn is that both E and CBT can be effective treatments for PTSD in refugees.

The lifetime prevalence of post-traumatic stress disorder (PTSD) in community samples that were not at risk for PTSD ranged from 1.0 to 1.3% (Davidson, Hughes, Blazer & George, 1991; Helzer, Robins & McEvoy, 1987; Perkonigg, Kessler, Storz & Wittchen, 2000). Current prevalence rates of PTSD in different traumatized refugee groups varied between 10.7 and 86% depending upon the type of sample, the type of traumatic events, and the refugee groups that were studied (Carlson & Rosser-Hogan, 1991, Cheung, 1994, Gorst-Unsworth & Goldenberg, 1998 and Kinzie et al., 1990; Lavik, Hauff, Skrondal & Solberg, 1996). Some traumatized refugee groups seem to run a much higher risk to develop PTSD than individuals exposed to civilian traumas. For example, Carlson and Rosser-Hogan (1991) found an 86% current prevalence rate of PTSD in a randomly selected community sample of Cambodian refugees in the USA, which is about nine times higher than the 9.7% prevalence rate of current PTSD that was found in a nationally representative sample of civilian female assault victims (Resnick, Kilpatrick, Dansky, Saunders & Best, 1993). Foa and Meadows (1997) stated that the most vigorously studied psychological treatments for PTSD are the cognitive-behavioral interventions. In their literature review of psychological treatment outcome studies for PTSD they concluded that controlled studies support the efficacy of imaginal and in vivo exposure and stress inoculation training (SIT) for the treatment of PTSD. Also, they stated that cognitive processing therapy has shown promising initial findings, but that it awaits more rigorously controlled studies before its efficacy can be determined. Only one study has used formal PTSD measures according to the DSM-criteria in order to evaluate the efficacy of a psychological treatment for a group of refugees with PTSD. Weine, Kulenovic, Pavkovic and Gibbons (1998) evaluated testimony psychotherapy (Agger & Jensen, 1990 and Cienfuegos & Monelli, 1983) in 20 adult Bosnian refugees. They received an average of six weekly sessions (range=4–8) of treatment, each session lasting approximately 90 min. The rate of PTSD diagnosis decreased from 100% before treatment to 75% after treatment, 70% at 2-month follow-up and 53% at 6-month follow-up. The authors state that one overlap between testimony psychotherapy and cognitive-behavioral therapy (CBT) is imaginal exposure (Weine et al., 1998; p. 1725). This study indicates that exposure therapy might be an effective treatment for refugees with PTSD. However, due to the lack of randomized treatment studies the relative effectiveness of psychological treatments for PTSD in refugees cannot yet be determined. According to the cognitive theory of PTSD (Ehlers & Steil, 1995) the traumatized individual interprets the occurrence of the intrusive recollections in a catastrophic way. Catastrophic interpretations of intrusive recollections may recharge the PTSD-symptoms despite occasional habituation after prolonged exposure (PE) to trauma cues. It is hypothesized that a CBT that targets both catastrophic interpretations of intrusions and avoidance behaviors in PTSD will be significantly more effective than exposure treatment that only focuses on avoidance behaviors. In this study CBT is compared with exposure therapy (E) as treatments for PTSD in refugees. To the best of our knowledge, this is the first randomized treatment outcome study with a refugee sample. It is hypothesized that both treatments will significantly reduce PTSD symptoms. Furthermore, it is predicted that CBT will be more effective than E because it targets catastrophic interpretations of intrusions in addition to avoidance behaviors. Secondly, it is predicted that anxious and depressive symptomatology will be significantly reduced by both treatments, but that CBT will be more effective than E. Thirdly, it is hypothesized that the quality of life and cognitive schemas of assumptions about the world will be improved by both treatments. Finally, it is predicted that these results will be maintained at a 6-month follow-up.