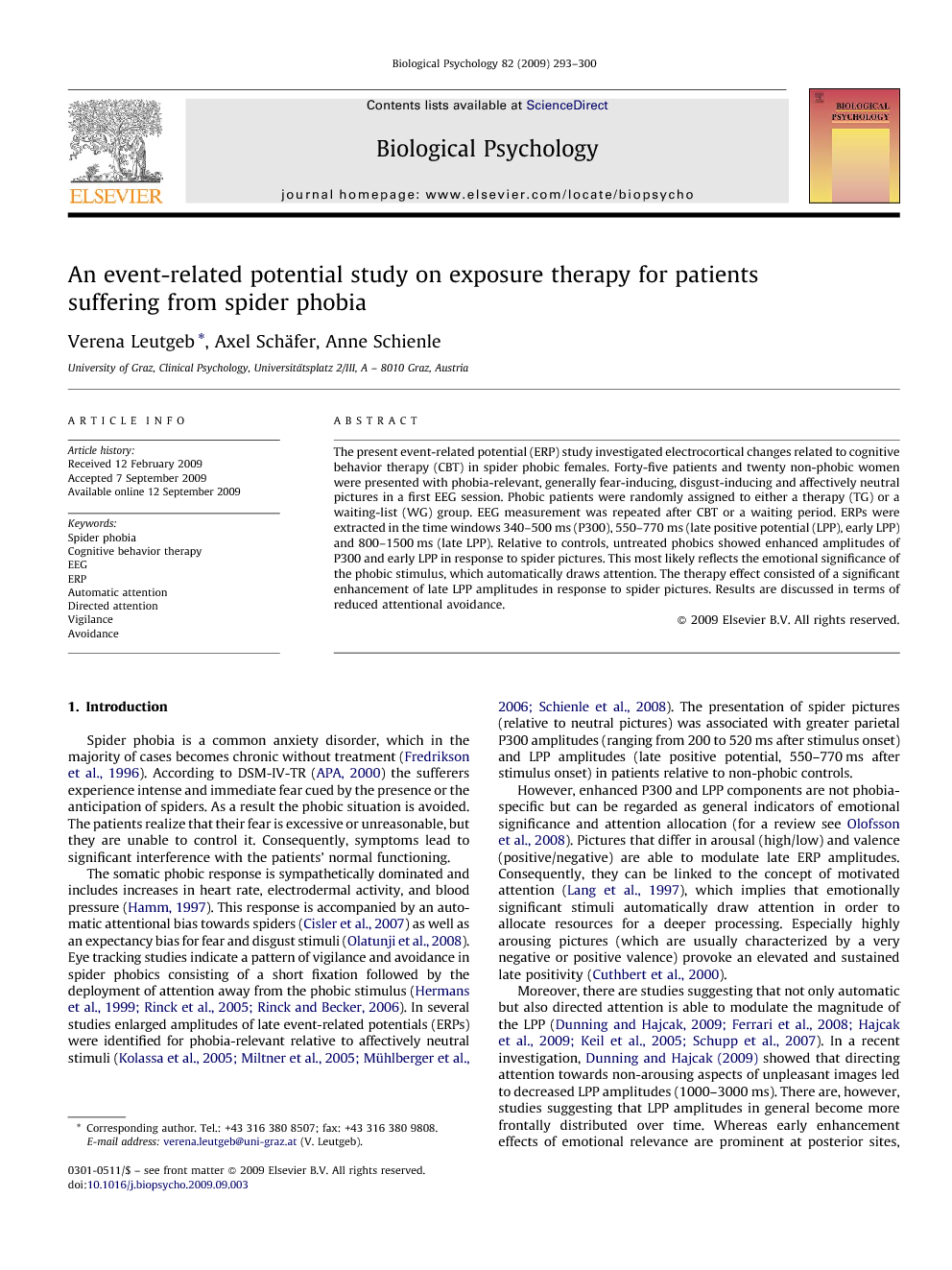 Spider phobia is a common anxiety disorder, which in the majority of cases becomes chronic without treatment (Fredrikson et al., 1996). According to DSM-IV-TR (APA, 2000) the sufferers experience intense and immediate fear cued by the presence or the anticipation of spiders. As a result the phobic situation is avoided. The patients realize that their fear is excessive or unreasonable, but they are unable to control it. Consequently, symptoms lead to significant interference with the patients’ normal functioning. The somatic phobic response is sympathetically dominated and includes increases in heart rate, electrodermal activity, and blood pressure (Hamm, 1997). This response is accompanied by an automatic attentional bias towards spiders (Cisler et al., 2007) as well as an expectancy bias for fear and disgust stimuli (Olatunji et al., 2008). Eye tracking studies indicate a pattern of vigilance and avoidance in spider phobics consisting of a short fixation followed by the deployment of attention away from the phobic stimulus (Hermans et al., 1999, Rinck et al., 2005 and Rinck and Becker, 2006). In several studies enlarged amplitudes of late event-related potentials (ERPs) were identified for phobia-relevant relative to affectively neutral stimuli (Kolassa et al., 2005, Miltner et al., 2005, Mühlberger et al., 2006 and Schienle et al., 2008). The presentation of spider pictures (relative to neutral pictures) was associated with greater parietal P300 amplitudes (ranging from 200 to 520 ms after stimulus onset) and LPP amplitudes (late positive potential, 550–770 ms after stimulus onset) in patients relative to non-phobic controls. However, enhanced P300 and LPP components are not phobia-specific but can be regarded as general indicators of emotional significance and attention allocation (for a review see Olofsson et al., 2008). Pictures that differ in arousal (high/low) and valence (positive/negative) are able to modulate late ERP amplitudes. Consequently, they can be linked to the concept of motivated attention (Lang et al., 1997), which implies that emotionally significant stimuli automatically draw attention in order to allocate resources for a deeper processing. Especially highly arousing pictures (which are usually characterized by a very negative or positive valence) provoke an elevated and sustained late positivity (Cuthbert et al., 2000). Moreover, there are studies suggesting that not only automatic but also directed attention is able to modulate the magnitude of the LPP (Dunning and Hajcak, 2009, Ferrari et al., 2008, Hajcak et al., 2009, Keil et al., 2005 and Schupp et al., 2007). In a recent investigation, Dunning and Hajcak (2009) showed that directing attention towards non-arousing aspects of unpleasant images led to decreased LPP amplitudes (1000–3000 ms). There are, however, studies suggesting that LPP amplitudes in general become more frontally distributed over time. Whereas early enhancement effects of emotional relevance are prominent at posterior sites, this effect shifts to frontal sites in middle and later time windows (e.g., Foti et al., 2009 and Foti and Hajcak, 2008). Altogether, existing empirical data support the view that late ERP positivity to affective pictures can be modulated by intrinsic motivation and attention allocation. Therefore, it seems promising to investigate these components not only with regard to symptom provocation in spider phobics but also with regard to symptom reduction. The most frequently used symptom reduction method for spider phobia is cognitive behavior therapy (CBT; Choy et al., 2007, Öst, 1989, Öst, 1996 and Öst et al., 1997). Untreated spider phobics perceive spiders as unpredictable and dangerous (dysfunctional cognitions) and they show deficits in controlling their anxiety (Armfield, 2007 and Armfield, 2008). Therefore, the main goal of CBT is to help patients gaining control over their dysfunctional cognitions (e.g., the spider will bite me), emotions, and behaviors via gradual exposure to the phobic object. In the course of CBT patients are guided to focus attention on the feared object (e.g., count legs, eyes of the spider). Through exposure, patients realize that the feared consequences do not occur and that avoidance is not necessary for anxiety to reduce. Neural correlates of CBT in spider phobia have only been investigated with functional magnetic resonance imaging (fMRI). In a first controlled study (Straube et al., 2006) the therapy effect consisted of a significant activation attenuation in the insula and the anterior cingulate cortex. The authors interpreted this outcome in terms of a therapy-induced normalization of (autonomic) hyperactivation. In a second fMRI study (Schienle et al., 2007) successful CBT provoked increased activation of the medial orbitofrontal cortex (OFC). This region of the brain is crucial for emotion regulation and relearning of stimulus-reinforcement associations (Rolls, 1999). In a 6-month follow-up study the medial OFC effect showed temporal stability in those patients who were able to maintain symptom reduction (Schienle et al., 2009). This finding shows that successful CBT can result in increased neural activation in specific brain regions as opposed to a simple attenuation of hyperactivation. Since fMRI is characterized by a high spatial but low temporal resolution, ERPs seem to be a helpful tool to complement existing fMRI findings on CBT effects in spider phobia. The goal of the present study was to extend previous work on enhanced late ERPs to phobia-relevant material in spider phobics and to determine if these ERPs are sensitive to CBT. We expected enlarged parietal P300 and LPP amplitudes in untreated spider phobics when exposed to spider pictures and a reduction in those ERP components after successful exposure therapy.

This study indicates that successful cognitive behavior therapy (CBT) in spider phobics is accompanied by a significant enhancement of central late LPPs (800–1500 ms) during exposure. This enhancement might mirror increased directed attention towards the stimulus and reduced attentional avoidance.