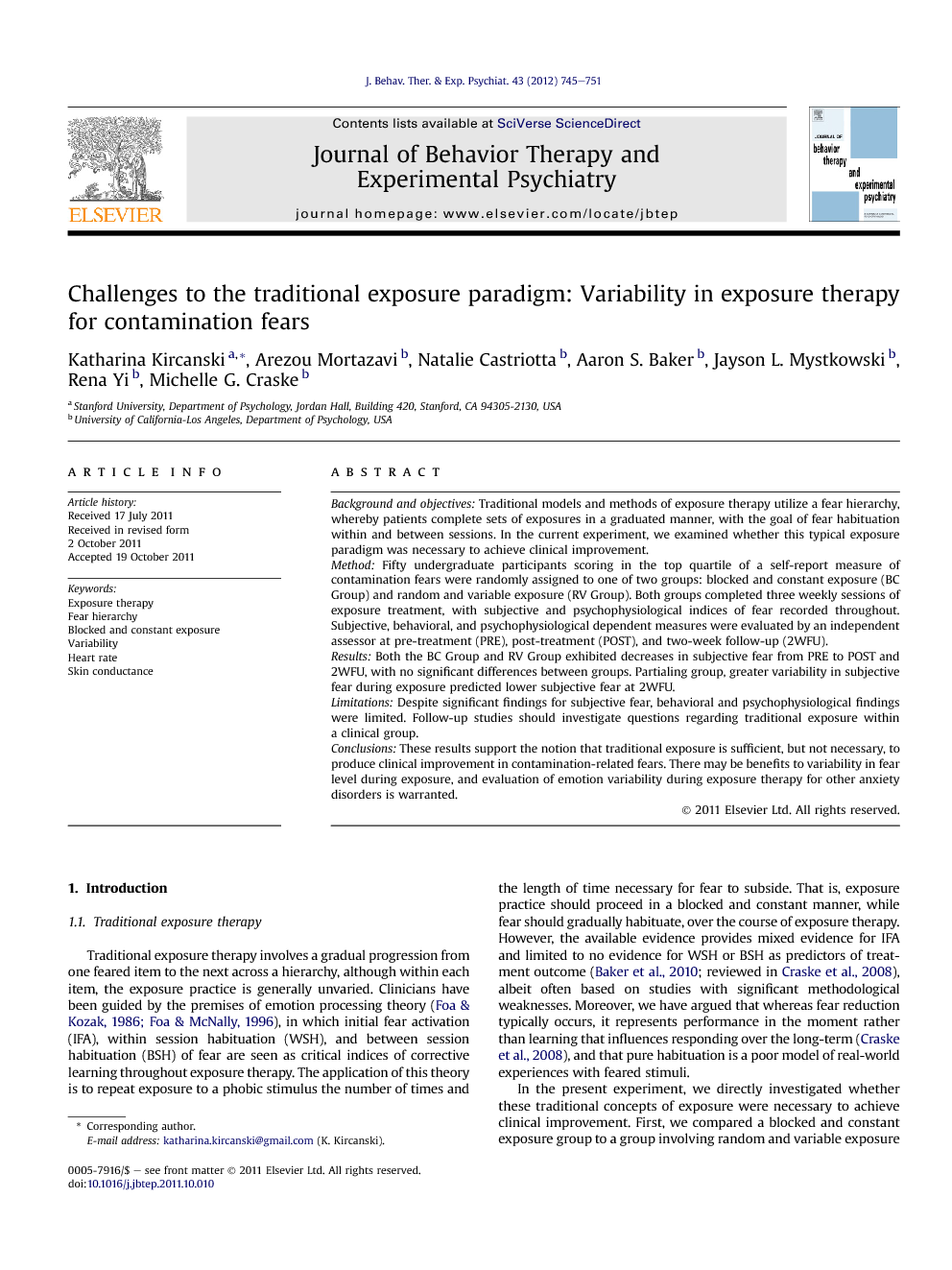 Background and objectives Traditional models and methods of exposure therapy utilize a fear hierarchy, whereby patients complete sets of exposures in a graduated manner, with the goal of fear habituation within and between sessions. In the current experiment, we examined whether this typical exposure paradigm was necessary to achieve clinical improvement. Method Fifty undergraduate participants scoring in the top quartile of a self-report measure of contamination fears were randomly assigned to one of two groups: blocked and constant exposure (BC Group) and random and variable exposure (RV Group). Both groups completed three weekly sessions of exposure treatment, with subjective and psychophysiological indices of fear recorded throughout. Subjective, behavioral, and psychophysiological dependent measures were evaluated by an independent assessor at pre-treatment (PRE), post-treatment (POST), and two-week follow-up (2WFU). Results Both the BC Group and RV Group exhibited decreases in subjective fear from PRE to POST and 2WFU, with no significant differences between groups. Partialing group, greater variability in subjective fear during exposure predicted lower subjective fear at 2WFU. Limitations Despite significant findings for subjective fear, behavioral and psychophysiological findings were limited. Follow-up studies should investigate questions regarding traditional exposure within a clinical group. Conclusions These results support the notion that traditional exposure is sufficient, but not necessary, to produce clinical improvement in contamination-related fears. There may be benefits to variability in fear level during exposure, and evaluation of emotion variability during exposure therapy for other anxiety disorders is warranted.

Traditional exposure therapy involves a gradual progression from one feared item to the next across a hierarchy, although within each item, the exposure practice is generally unvaried. Clinicians have been guided by the premises of emotion processing theory (Foa and Kozak, 1986 and Foa and McNally, 1996), in which initial fear activation (IFA), within session habituation (WSH), and between session habituation (BSH) of fear are seen as critical indices of corrective learning throughout exposure therapy. The application of this theory is to repeat exposure to a phobic stimulus the number of times and the length of time necessary for fear to subside. That is, exposure practice should proceed in a blocked and constant manner, while fear should gradually habituate, over the course of exposure therapy. However, the available evidence provides mixed evidence for IFA and limited to no evidence for WSH or BSH as predictors of treatment outcome (Baker et al., 2010; reviewed in Craske et al., 2008), albeit often based on studies with significant methodological weaknesses. Moreover, we have argued that whereas fear reduction typically occurs, it represents performance in the moment rather than learning that influences responding over the long-term (Craske et al., 2008), and that pure habituation is a poor model of real-world experiences with feared stimuli. In the present experiment, we directly investigated whether these traditional concepts of exposure were necessary to achieve clinical improvement. First, we compared a blocked and constant exposure group to a group involving random and variable exposure (i.e., stimulus variability). Second, we examined exposure process measures of IFA, WSH, BSH, as well as variability in indices of fear (i.e., emotion variability) in relation to treatment outcome.