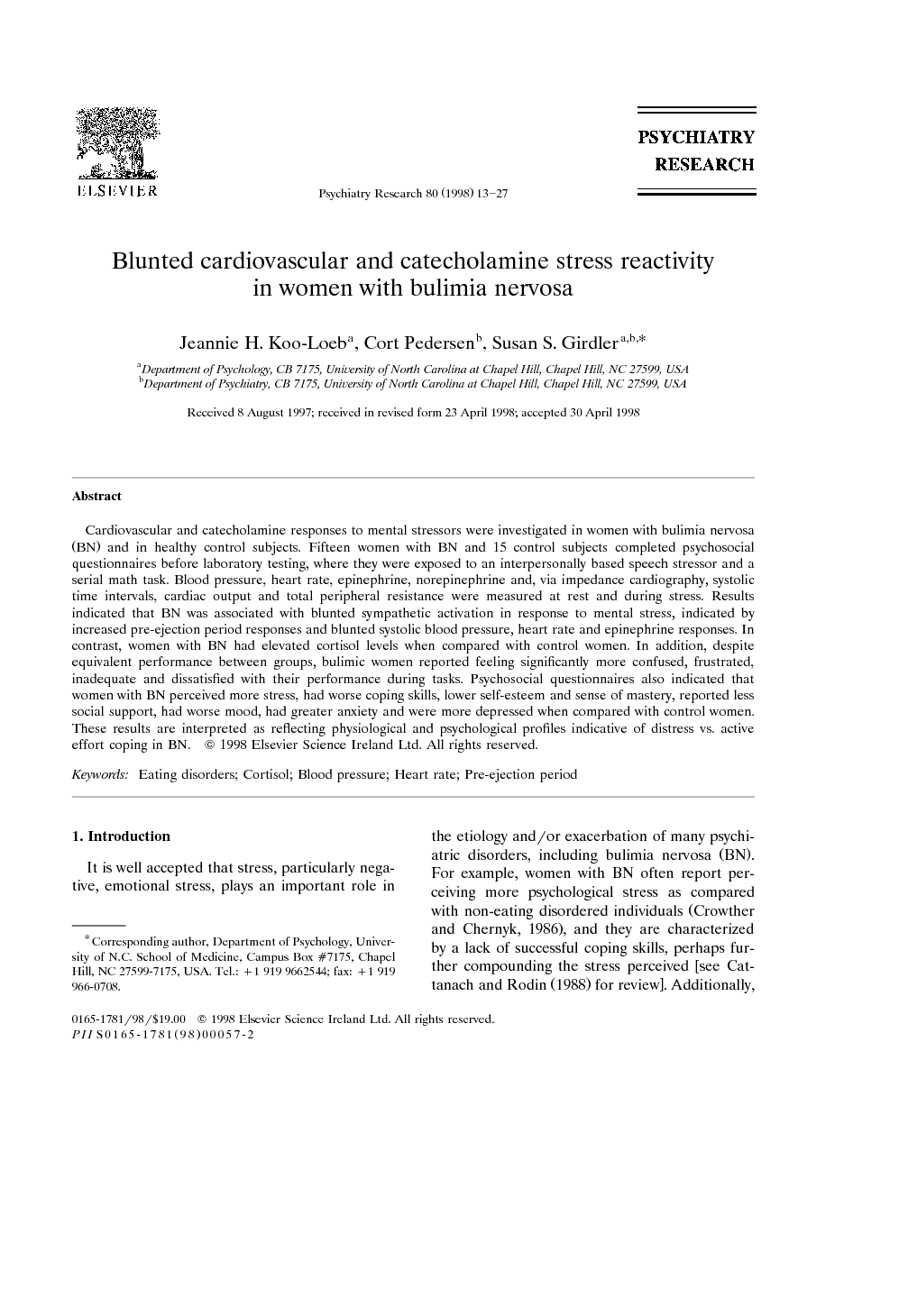 Cardiovascular and catecholamine responses to mental stressors were investigated in women with bulimia nervosa (BN) and in healthy control subjects. Fifteen women with BN and 15 control subjects completed psychosocial questionnaires before laboratory testing, where they were exposed to an interpersonally based speech stressor and a serial math task. Blood pressure, heart rate, epinephrine, norepinephrine and, via impedance cardiography, systolic time intervals, cardiac output and total peripheral resistance were measured at rest and during stress. Results indicated that BN was associated with blunted sympathetic activation in response to mental stress, indicated by increased pre-ejection period responses and blunted systolic blood pressure, heart rate and epinephrine responses. In contrast, women with BN had elevated cortisol levels when compared with control women. In addition, despite equivalent performance between groups, bulimic women reported feeling significantly more confused, frustrated, inadequate and dissatisfied with their performance during tasks. Psychosocial questionnaires also indicated that women with BN perceived more stress, had worse coping skills, lower self-esteem and sense of mastery, reported less social support, had worse mood, had greater anxiety and were more depressed when compared with control women. These results are interpreted as reflecting physiological and psychological profiles indicative of distress vs. active effort coping in BN. © 1998 Elsevier Science Ireland Ltd. All rights reserved.

It is well accepted that stress, particularly negative, emotional stress, plays an important role in the etiology and/or exacerbation of many psychiatric disorders, including bulimia nervosa (BN). For example, women with BN often report perceiving more psychological stress as compared with non-eating disordered individuals (Crowther and Chernyk, 1986), and they are characterized by a lack of successful coping skills, perhaps further compounding the stress perceived [see Cattanach and Rodin (1988)for review]. Additionally, women with BN may exhibit increased levels of cortisol (Hudson et al., 1982, Copeland et al., 1988 and Mortola et al., 1989), a hormone indicative of physiological stress. Studies also suggest that stress and negative affect may precede binges and the binge–purge cycle (Barrios and Pennebaker, 1982, Abraham and Joseph, 1987 and Lingswiler et al., 1989) and may even play a role in the maintenance of this disorder (Cattanach and Rodin, 1988). Despite this evidence for a role of stress in BN, the empirical evidence has yet to indicate the exact nature of the stress–illness relationship. This has been due, in part, to the lack of consistent strategies for examining the neurobiological processes of stress in psychiatric patients (Briere, 1989). Thus, one purpose of the present study was to employ well-validated, psychophysiological techniques to investigate cardiovascular as well as stress-relevant neuroendocrine measures in women with BN relative to healthy control women. Evidence for the dysregulation of the stress response in BN may help to clarify the impact that greater life stressors combined with poor coping skills [see Cattanach and Rodin (1988)for review] has on the clinical presentation of BN. It has been proposed (Kling et al., 1989, Chrousos, 1992 and Chrousos and Gold, 1992) that frequent or prolonged exposure to stressors in susceptible individuals may result in dysregulation of the generalized stress response (GSR), when the usual counter-regulatory forces designed to maintain homeostasis fail. In addition to the peripheral changes elicited during the GSR, which are designed to promote an adaptive redirection of energy, the hypothalamus and locus ceruleus/NE containing neurons project to other brain systems, including the mesocortical/mesolimbic and amygdala/hippocampal systems, which play profound roles in setting the levels of arousal and emotional tone in the organism. Dysregulation of the stress response would increase vulnerability to subsequent stressors since either hyper- or hypo-activation of the stress response would decrease the range of arousal for optimum sense of well-being and performance (Chrousos and Gold, 1992). Indeed, there has been recent identification of several major illnesses that occur as a result of, or are associated with, dysregulation of the stress response, including melancholic depression (Briere, 1989Kling et al., 1989Chrousos, 1995). Although a number of studies have examined stress-related neuroendocrine measures in BN, with most, though not all, indicating reduced norepinephrine levels [George et al. (1990)and see Pirke (1996)for review] but elevated cortisol (Hudson et al., 1982, Copeland et al., 1988 and Mortola et al., 1989), these studies have relied on basal levels only. Only two studies (Cattanach et al., 1988; Pirke et al., 1992b) have investigated physiological responses to interpersonal or psychological stress in BN. Cattanach et al. (1988)found that those who scored high on an eating disorder questionnaire vs. those who scored low rated an increase in desire to binge following standardized laboratory stressors which included Interpersonal Conflict, Stroop, Speech and Social Interaction conditions. Though Cattanach et al. (1988)found no differences in cardiovascular reactivity to stressors, their groups were based on questionnaire assessment and were not verified, via structured interview, to meet clinical criteria for any eating disorder. Pirke et al. (1992b)investigated differences in norepinephrine (NE) levels in hospitalized women with BN vs. control women during a control (no stress) session and during a mental stress session. In that study, women with BN had significantly increased basal levels of cortisol but decreased NE during the control session. While performing the mental stressor (e.g. noise during a computer-based intelligence test), women with BN showed a significantly blunted response for both cortisol and NE compared with control women. These investigators were led to question whether the blunted norepinephrine to mental stress observed in BN reflected a general reduction of sympathetic nervous system activity in this disorder. Lack of other sympathetic indices, however, prevented them from reaching any definitive conclusions. Therefore a second goal for this study was to assess an array of sympathetic measures in BN under both basal and stress conditions. The final aim was to study non-hospitalized women with BN for sympathetic and neuroendocrine abnormalities, since previous studies have relied primarily on hospitalized women who may have refrained from their normal binge–purge behaviors for several weeks (e.g. Pirke et al., 1992b)